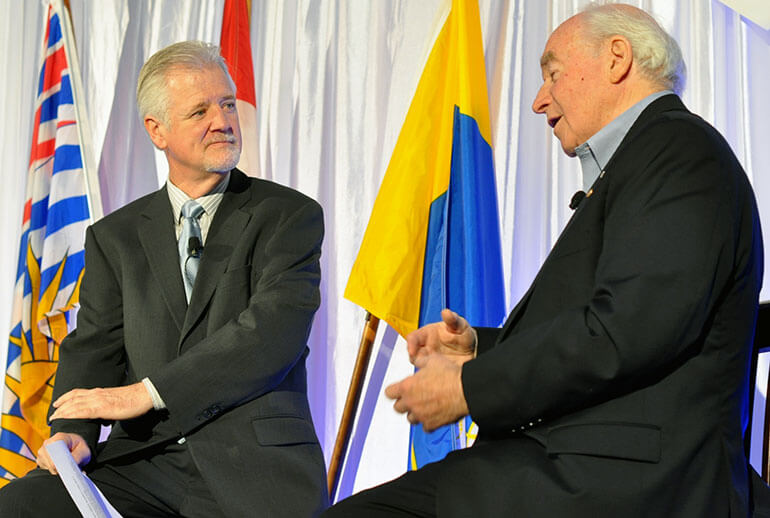 It was a morning of accolades, accomplishments and astonishments at the Valley First/UBC Okanagan Athletics Scholarship Breakfast Friday morning.

Close to 350 people gathered for the 12th annual breakfast, which not only recognizes student accomplishments but also raises money for the student athlete scholarship endowments.

While the point of the event is to raise money, the gathered audience—including university officials—were caught off guard as student speaker Megan Festival announced her family will donate $25,000 to the Heat women’s volleyball team. Bidding a bittersweet farewell to university sports, the soon-to-be graduate thanked UBC for the many opportunities that came her way during her five years as a Heat athlete.

She joined the women’s volleyball team in 2012 and played alongside her older sister Jillian for two years. Both Festival athletes were an integral part of the volleyball team’s successes, and Director of Athletics and Recreation Rob Johnson was thrilled by the announcement.

“We are extremely thankful to the Festivals—most of all for trusting us with their wonderful daughters Jill and Megan for the past eight years,” he said. “And, having had the opportunity of getting to know parents John and Janette, while I was unaware of their plan to make a gift this morning, I am not surprised.

“They have been consistent and thoughtful fans and supporters of our program from the beginning, and this generous gift will help the program continue to thrive in the future. On many levels, our program is stronger from their involvement.”

It was a morning to shine light on the accomplishments of the athletes and UBC President Santa Ono took the opportunity to congratulate the student athletes, encouraging those in attendance to stand for a round of applause.

A self-confessed sports fan, Ono told the audience that athletics means more than scoreboards and trophies.

“There is nothing more powerful than athletics to bring an institution together,” he said. “It brings faculty, administration, and staff together and builds the spirit in our institution while bringing the community together.”

“Our student athletes are wonderful ambassadors for the university,” he said. “They really have two full-time jobs between practicing, travelling, and competing at the highest level. They are the superstars in our institution and we couldn’t be more proud of them.”

Special guest at the breakfast, Doug Mitchell also had a strong message for the full house. Mitchell who has been an ambassador for all levels of sport, from amateur athletics to the National Hockey League, to Commissioner of the CFL to his current role as a board member of the Canadian Olympic Foundation.

“A university degree can open many doors for you, but it doesn’t give you the steps you earn when you play varsity athletics,” he said. “Learning to manage your schedule—between practices, travelling and keeping up with your academics—sets you at an advantage for the rest of your life.”

With the gift from the Festival family, more than $75,000 was raised at this year’s event, bringing the endowment total to over $800,000.