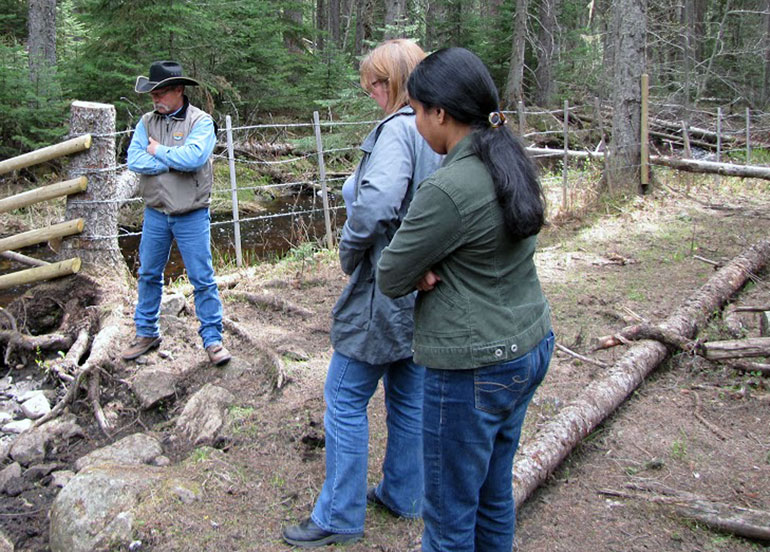 Cattle, recreational users may be cause of damage to drinking water supplies

Researchers at UBC’s Okanagan campus are working with local ranchers and stakeholders to determine the best way to protect drinking water on cattle grazing lands.

“We have a lot of community outreach built into this project and people are concerned about drinking water,” says Roberts. “At the same time, while there are best management practices in place — like fencing around a body of water to keep cattle out — water is still becoming contaminated.”

Funding for the $150,000 three-year study has come from the Investment Agriculture Foundation, B.C. Ministry of Forests, Lands and Natural Resource Operations, and the North Okanagan Regional District. Other stakeholders include Interior Health Authority, the BC Cattlemen’s Association, and local municipalities.

Ranchers pay fees to the provincial government to allow the cattle onto Crown Lands.

“Cattle graze in the watersheds in the summer months,” says Roberts. “The Ministry has done a lot of work and they now need to gather the scientific evidence that these practices are working.”

Samples have been taken from several sources, including lakes, creeks, water intakes, and areas where cattle graze and wade into watercourses. Researchers are checking turbidity and levels of pathogens such as Cryptosporidium and E.coli.

How long pathogens survive in manure, whether rain and meltwater wash them into drinking water sources and the effects of natural contaminants such as leaves, pine needles, and bugs are all being investigated.

As well as testing for water-borne illnesses, the students are taking DNA samples to determine whether pathogens found in the water are from cattle or wildlife. Roberts suggests that cattle aren’t the only source of contamination. Wildlife that can’t be fenced — bears, beavers, bobcats — and recreational users who leave gates open, add to the problem.

Weekly water samples from Oyama Lake watershed, Vernon Creek, the Duteau Creek water system, and King Eddy Lake watershed have been collected over the last two summers by the team of four undergraduate and two graduate students. The current focus is on the Duteau creek watershed. The goal, says Roberts, is to minimize the health risk for people while balancing mixed uses and recreation in the watershed.

“Everybody is working together to improve the water quality and at the same time they recognize the land has many different user groups,” says Roberts. “Everybody has something to bring to the table and we all want the same end-result — safe drinking water.”