The Little Company That Could 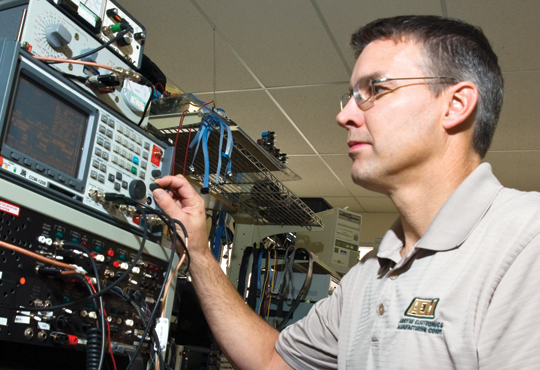 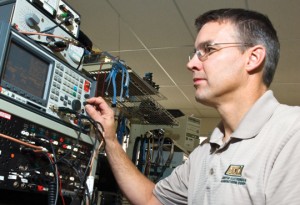 Bucking the dour headlines, Anodyne Electronics Manufacturing Corp. (AEM) is a bright spot in the firmament. With little more than a year under its belt the new company has managed to keep 49 manufacturing jobs from going south of the border, actually increased employment to 60 and brought in sales higher than projections that would have been enviable during the fat years of a decade past.

When you’ve got broken eggs, make an omelette

Slightly more than two years ago, Kelowna-based Northern Airborne Technologies (NAT) was on the verge of closing its doors in a move to Prescott, Arizona, precipitated by parent company, Cobham, an international aerospace giant. But an ambitious husband and wife team, Dave and Diana Veitch, stepped up to work with the progressive parent and a new, independent manufacturing entity was born.

Dave, who was NAT’s production manager, could see a future for this small Valley business through specialized service on a worldwide scale. But Cobham was used to thinking on a grander scale and didn’t realize NAT was a company that was macro-oriented in terms of service and production.

Dave says, when a customer called they asked: “Do we have a product that fits or do we need to design one?” No fit. “So we did the design; we did prototyping; we did the certification; and we did the manufacturing. All of it was in-house. The only thing we sent out was the actual making of the raw circuit board. There are too many companies that know how to do that and we didn’t want to get into it.”

NAT was outside the outsourcing paradigm that business gurus were espousing. Instead of mega-orders in the hundreds of thousands of parts, it was able to deal with small, highly profitable runs of five to 100 parts. Because of the sophisticated and complex engineering involved, the company could still make a substantial profit defying the “bigger is better” philosophy. And it had a trained workforce capable of designing and producing the products right here in the Valley.

All of this was in jeopardy when Cobham began the reorganization.

“Obviously they really didn’t know what NAT was,” says Dave. “They came to us and said, ‘NAT, here’s what we’re doing. We’re shutting you down. We’re going to keep the engineering group here (in Kelowna) and we’re going to move all of production.’”

Dave says Cobham let that sink in for two days then they came to him with a lifeline. “But?—?we don’t think we can move all the product because not all of it will fit the paradigm for assembly and outsourcing.”

Dave grabbed the lifeline and began to develop a plan to buy the company out.

“We knew right off the bat that Cobham was really going to have to stand up and say, ‘You know what? We’re going to give you a great contract so that you will be successful.’” Dave says both parties approached the situation from a positive angle. “You have to do that,” he says. “You can’t be adversarial.”

It took two years of negotiations and planning before Anodyne Electronics Manufacturing Corp. (AEM) was born in October, 2009, and there were stumbling blocks to overcome along the way.

You don’t just slap down a credit card and buy a company. Dave approached a number of sources for financing?—?including his fellow employees at NAT. Nine individuals were able to come up with the money required for a share in the new venture. There were other employees who would have liked to take part in the purchase, but the price tag was too steep.

“Every one of my top managers bought in and there were two or three people on the line who also invested.”

After six years with NAT, buying into AEM was a no-brainer for Nathan Meade, AEM’s electronics production supervisor. “I’m far better off working for AEM than if I’d taken a package,” he says. “I get to do what I love doing and was trained for and I wasn’t as nervous about making the financial investment it required as I have been about investing in mutual funds and the stock market.”

But keeping their jobs was not a pay-to-play scenario for the remaining people. All 49 employees stepped out of NAT at quitting time on Oct. 12, 2009, and into AEM the next morning. Every one came over to AEM with their seniority, pension, pay structure, profit sharing and holidays intact. However, as part of the contract, there was no cash settlement that would allow them to buy into the new company.

This concerns Dave and his wife Diana who are on the hook for both the employee investments and company loans. But despite this, Dave plans to create a pool of affordable shares that would allow the employees to start buying in as the company prospers. And while all of the current owner-investors felt the investment was worthwhile, employee financing was still not enough to make the deal fly.

Cobham helped out by letting AEM keep NAT’s inventory, which could be paid off as the inventory was sold off. They also gave the fledging company a beauty of a contract to continue producing the parts they were already manufacturing. But even with this positive boost more money was needed.

Dave says the major Canadian banks all turned them down or offered financing at outrageous interest rates and terms. Finally, he and Diana were able to get some funding from the Business Development Bank of Canada, where the interest rates were high, but not as bad as the five national banks were offering. The other lending institution that came on board was HSBC, which provided lines of credit for AEM’s day-to-day operations and continues to work with them.

Taking on the Competition

With their financial ducks in a row, it was time to line up the certifications necessary to compete in the world of aviation. “Because we come from an aviation background,” says Dave, “our quality systems are very evolved and you need that to stay in the aviation industry.” The new company particularly required Transport Canada approval for its repair facilities and the European Aviation Safety Agency certification for repairs. Both are hard to get, but AEM has secured them.

The fledgling company has also gone after AS 9100 certification, a manufacturing standard around the world. “If you want to play with the big guys,” Dave says, “you’ve got to have that.” Most of the commercial and consumer electronics manufacturing industry doesn’t need it. The ISO certification that NAT had is the accepted standard and it is relatively easy to get. But AEM elected to skip ISO altogether and went straight to AS 9100, which it has achieved.

AEM is a multi-faceted company within the narrow world of electronics manufacturing. They are a sub-contractor or gun-for-hire when it comes to producing work for other individuals or companies and their output runs the gamut of electronics. Inventors and designers come to them with ideas?—?sometimes drawn out properly, sometimes merely an idea sketched on a sheet of paper ?—?and ask them to turn concept into working prototype.

They also do the actual production of other companies’ products, manufacturing everything from the metal boxes used to mount circuit boards to the illuminated faceplates that carry the toggles and knobs for the finished unit.

Ninety-eight per cent of AEM’s business is done with American companies. “A really nice order just came through from a company called Rogerson Kratos,” says Dave. “I met them at a convention in Florida. We went to visit them and got the chance to quote on two big jobs. One was a simple faceplate and the other was a full, metalized keyboard that goes into the cockpit of an aircraft.” AEM will build 200 units over the next two years and Dave hopes that from this they will be in line for more, if not all, of Rogerson Kratos’ business.

Beyond the Hired Gun

The Transport Canada certification puts AEM in position to repair avionics equipment and certify it to reinstall on the aircraft. Dave explains: “You can’t take a radio out of a local aircraft, go to a local guy and say fix it, then put that back on that aircraft. Transport Canada will not let that airplane fly.”

Repairs already account for 10 per cent of AEM’s business and there is good money in it. Dave wants to develop repairs to the point where they represent a quarter of the company’s overall business. However, major profitability will come when AEM owns and sells the products it produces.

For Dave, sub-contract manufacturing means being reliant on other people. Those middlemen are looking for anybody to make their product. Loyalty is one factor, but loyalty is not necessarily good business and good business people are always looking for cheaper suppliers.

“I want to be controlling my destiny,” says Dave. “I want to see my customer, I want to be able to sell that customer. In the long run that’s really where we want to be. We want to have our own products. Whether that’s from licensing from other people or buying their designs or creating our own designs.”

One again the old parent company is helping AEM. “Cobham has decided they don’t want to build the product we’ve been building here for them so they are allowing us to license that engineering. We’ll take that into our company…. We’re now able to go directly to the customer with that product.”

For Dave and Diana, their partners and employees, AEM represents a lot more than just a way to make money, it represents their future and their concern is with protecting and enhancing that future. –Bruce Kemp