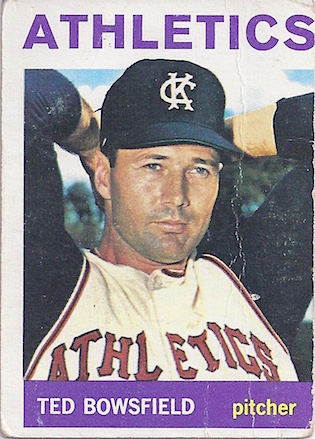 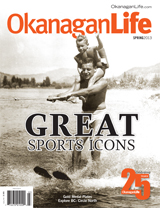 In honour of opening day for Major League Baseball (MLB) season, we're re-posting our feature on the Okanagan's very own major league baseball hero. Originally published in our Spring 2013 issue.

Boston sports writers dubbed him the Penticton Peach, but it’s safe to say that batters facing Ted Bowsfield’s 105-mph fastball thought he was anything but sweet.

Born in Vernon and raised in Penticton, Ted was the first BC ballplayer to stick in the major leagues for an extended period, playing seven seasons with the Boston Red Sox, Cleveland Indians, Los Angeles Angels and Kansas City Athletics. He compiled a career win-loss record of 37-39 in 215 appearances with 326 strikeouts.

Ted first started to play catch on visits to his grandparents in Vernon. His mother and her two sisters all played on a girls’ baseball team during the war years. “I think my athleticism comes from that side of the family,” he says.

Yet it’s a miracle he made it to the big leagues. There was no Little League in Penticton then, but Ted’s father worked tirelessly setting up games with teams in surrounding towns like Hedley, Oliver, even Peachland. Ted and his teammates all piled into his father’s old Hudson and off they’d go. The lefthander was lucky to play eight games a year for much of his youth, hardly enough for a pitcher to develop. “I was very fortunate I made it as far as I did. The odds of it happening were not too great.”

Ted had a number of things in his favour. He was a fantastic all-round athlete who excelled in basketball, hockey, and track and field. He later turned down basketball scholarships to Gonzaga and Seattle University. Penticton was also blessed with very good semi-pro baseball. By age 15, Ted was playing against men, a tough training ground for a young pitcher learning his craft.

“I could throw hard and I was pretty wild, but my catcher Sam Drossos was just a wonderful athlete and a great person who could settle me down,” says Ted. “To this day we’re still friends.” 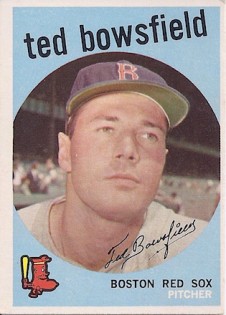 By his last two years of high school in 1953-54, scouts were circling. His pitches left clouds of smoke and confounded hitters. Boston’s northwest scout Earl Johnson, who had earlier spotted fellow BC Sports Hall of Famers Sandy Robertson and Arnie Hallgren, signed Ted for $4,000. When he made his Red Sox debut in 1958, his first major league contract was for $8,000. The most he ever received was $16,000, light years from the tens of millions thrown around today.

As the talented rookie found his feet on a roster that boasted the legendary Ted Williams, it became clear Ted had an uncanny skill that would keep any pitcher in the majors.

He was a Yankee killer.

As persistent arm and shoulder problems gradually ate away at his shotgun arm over the next six years, the smoking heater faded and Ted learned to rely on a curve and screwball to get by. His best overall season came in 1961 going 11-8 with the expansion Angels, the only LA starter to post a winning record that year. By age 29, the arm pain was so bad he hung up his glove for good. He has no regrets. “I always felt fortunate that every day in the major leagues was a dream come true. Every day was a blessing.”

After retiring, Ted managed Anaheim Stadium, Seattle’s Kingdome and the Tacoma Dome. While running a consulting business he worked on BC Place Stadium and Toronto’s SkyDome. Today Ted works part-time as a marshal and junior coordinator at Cypress Ridge Golf Course near his home in Nipomo, California.

Recently, a steady stream of BC ball players has flowed to the majors. When asked how it feels to have played some small role in blazing the trail, Ted remains humble. “They’re good ballplayers and they’ve earned their stripes. I give them a lot of credit for making it there.”

No one knows better than the Penticton Peach how tough that road can be.