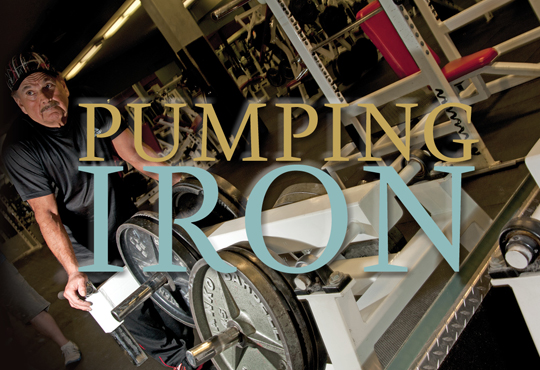 “I started exercising when I retired,” says 82-year old Christine Albert. After running a coffee shop in Penticton, she and her husband moved to Kelowna, where Christine hung up her apron and pulled on a pair of running shoes. “I had osteoporosis,” she explains. “I wanted to prevent further damage.”

“Older adults want to stay active as long as they can and carry on their favourite activities,” says Bobbi Kittle, owner of Pursuit Fitness and a personal trainer at the Seniors’ Centre in Kelowna, where Christine works out. “They want to fight the signs of aging, stay strong, prevent injuries and maintain quality of life.”

“I work out every day but Friday,” says class member, Gail Lewis, a bubbly 69-year old with a complexion as rosy as her personality. Clad in short workout tights and a fitted tank top, she’s got great gams, lean and toned—and big biceps, too.

Like Christine, Gail started working out to improve her health. “I had triple bypass heart surgery in 2005. Before that, I wasn’t really into exercise. My daughter bought me a gift certificate to the Running Room and it literally saved my life.” Gail pounded the pavement to newfound fitness. After losing her husband to cancer in 2010, running kept her from falling apart. “It was heartbreaking. Without exercise, I wouldn’t have made it.”

Fit as she was, Gail lacked upper body strength. Dr. Kevin Pistawka, a Kelowna cardiologist, suggested she add weight training to her regime for more than increased strength.

Even moderate weight lifting can hike the heart rate, thereby engaging both the cardiovascular and muscular systems. Weight lifting also increases lean muscle tissue and decreases the fatty kind; good news for our tickers—and our wardrobes.

Not only do we burn calories while working out, studies show by building more lean muscle mass, we burn them sitting still. That’s because lean muscle mass requires more energy to maintain and repair than fat tissue, so even in recovery mode, our bodies are working, leading to a healthier heart—and smaller shirt size.

“I used to be on a list of medications. Now it’s half a Lipitor (used to treat high cholesterol). That’s it!” Gail beams.

Even more than death, seniors fear a loss of independence, an Aging in Place in America study found.

A much-cited study by the University of British Columbia found after just six months of resistance training, women with mild cognitive impairment and memory issues experienced improved attention, problem-solving and decision-making functions of the brain.

The study followed 86 women aged 70 to 80 years old. Divided into three groups, the women worked out twice a week. One group lifted weights to build muscle strength; one walked outdoors for aerobic exercise; while the final group participated in balance and toning classes. Brain charting MRIs taken before and after the study showed the weight lifting group had significant cognitive improvement compared with the other two groups.

While all exercise is good, Professor Teresa Liu-Ambrose speculated the mental power needed to learn and execute resistance routines played a role compared to, say, walking, which we do without much thought. “When you are performing strength-training exercises such as lifting weights, you’re constantly monitoring what you’re doing; you’re monitoring breathing; you’re trying to monitor the number of sets, the repetitions you’re doing as well as maintaining good form,” she told CBC News.

Leslie Park, a personal trainer specializing in exercise prescription and rehabilitation at Global Fitness in Kelowna, agrees. “I do balance and agility work with seniors—all functional movements because they need to climb stairs, walk in icy parking lots, that kind of thing.”

Leslie says heavy weights are not necessary. “Our goal is to keep seniors functional and strong. The biggest reason that elderly people break hips is the shift in weight. They can’t get their feet to move fast enough to catch themselves before they fall. It’s about prevention. If we work on balance, core and overall body strength applied in functional exercises, we can keep them moving.”

Leslie’s client Michael O’ Reilly came to her following surgery to remove ribs and cancerous lung tissue. “My cancer was discovered in 2010. I’m extremely lucky to have survived this long,” the 81-year-old says.

“I was introduced to Leslie and that was the end of sitting around!” he says, laughing. “I had to start from the beginning, working to get my strength up and breathing under control.”

Michael says he loves the atmosphere at the gym, not to mention the “get up and go” working out gives him every day. “I have to keep up with my 75-year-old wife. She swims three times a week and when she walks, she really hustles.”

Tom Orke also works out at Global: three days a week, two to four hours at a time. Tanned and toned, he flexes his arm muscles. His bulging biceps don’t lie—the 74-year-old is ripped right up.

“Proper nutrition, enough sleep and plenty of exercise. It’s all important,” he says. “I smoked from ages 13 to 24 and when I quit, I gained weight. I’m short, so I looked like a little ball. I didn’t like it.” When Tom took up running, he dropped 30 pounds, but he lost a little more bulk than he bargained for. “I was too skinny. I didn’t like that either.”

Weight training helped him strike a balance between a healthy body weight and the physique he likes. “It clears my mind, makes me feel strong and healthy.”

Fit For a Long Life

Kelowna’s Dr. John Oliver, an orthopedic surgeon, assistant clinical professor at UBC medical school and consultant to the Canadian Freestyle Ski Team, works with athletes—from elite to elderly—and the prescription is the same: “daily exercise is the key to healthy living.”

Dr. Oliver says the injuries that have consequences for seniors’ quality of life result from falls. “Fractures of the wrist are most common. Next are fractures at the hip. These can be game changing events for anybody, but the older person has more challenges recovering.”

Prevention is key and along with aerobic exercise like walking, swimming and cycling, Dr. Oliver says strength training specific to muscle groups is now part of the prescribed exercise package. He advises seniors to seek professional help when starting a weight-training program.

That’s where personal trainer and owner of One-Life Fitness Sean Hawthorne comes in. He’s been designing programs to fit individual needs for more than a decade. “The concept of age-related muscle loss doesn’t have to happen,” he says. “Staying strong is the fountain of youth.”

A study at the UPMC Center for Sports Medicine in Pittsburgh confirms Sean’s beliefs. Following recreational athletes 40 to 81 years old who worked out four to five times a week, researchers found neither leg muscle size nor strength declined significantly with age among the subjects.

While older people are sometimes intimidated by the gym, Sean says once he gets them in, they’re hooked.

“Russ skis,” Brandie explains, “so we do lots of leg building and endurance exercises.”

“His balance and proprioception (unconscious perception of movement and spatial orientation) is better, his bones and ligaments are stronger. His recovering heart rate is better, and the neuro-stimulation is excellent,” Brandie says. “Plus he can ski more than two runs without getting tired.”

Gail Lewis has no intention of slowing down either. “It’s a commitment, but I want to be there for my kids and grandchildren. I want to live!” ~Shannon Linden