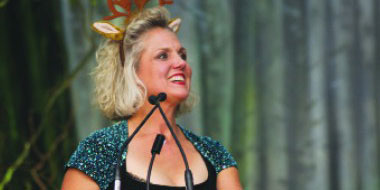 A strong voice and a gentle hand.

Romany Runnalls remembers rescued ducks following her grandfather around the house. Another of her earliest memories is the day she rescued her first animal.

“A Siamese cat had jumped in our dryer and I alerted my mom. Kitty was very happy and came flying out of the dryer,” she laughs. “I think I was only 18 months old at the time.”

Romany has always had an affinity for animals. “Bambi really did me in,” she says. “I was raised with wildlife around and a real respect for the land and the animals we have here.”

Born and raised in Kelowna, Romany earned a bachelor of science degree, majoring in zoology, at UBC. “When I was in university I fostered a goat. I lived in a condo and my landlord never found out. It was very young and it didn’t take long to get better. It was funny to be walking in Kitsilano with a baby goat on a leash.”

After finishing school, Romany moved east for a time. She worked in animal welfare and started her own cat rescue, Angels for Animals. Her move back to Kelowna in 1996 was for a very good reason. “I was broke! I gave all my money to charity,” she laughs. “I came back and became a mortgage broker and started helping people find homes. My mission statement is to help find homes for animals and people.”

And she’s done that with great success. Romany became involved with the Kelowna BC SPCA in about 2005 when she adopted a couple of cats. Since then she has championed the cause to such a degree that the organization named her Philanthropist of the Year in 2011.

Romany has now served on the provincial board for four years. She is the regional director for the Thompson/Okanagan Kootenay area and has been involved in the BC SPCA gala for seven years.

“I also work with the Okanagan Humane Society and I’m fostering a dog for some homeless people who are trying to get into stable housing.” She says homeless people love their dogs, but their pets are a barrier to finding housing and getting the programs they need.

“The BC SPCA is very good about checking in with the homeless and the Okanagan Humane Society. They make rounds to the homeless shelters to make sure that people with animals have them properly cared for. When they want to get off the street, we assist with compassionate care while they get through their programs. There’s a program for people who are trying to move out of abusive situations as well.”

Romany is also excited about several new programs including a pilot for people fostering or surrendering their animals, which provides for the animals to be spayed or neutered. “Then there is the problem of feral cats and community animals that aren’t fixed,” she adds. “We need to make a case for a spay/neuter program so we are looking at doing a community cat count day.”

Romany is pleased with the changes she’s seen over the years at the BC SPCA. In 2013 the organization created a cruelty hotline (1.855.622-7722) “and today we can transfer animals from other shelters that aren’t adopting out as fast as we are. If you can’t find an animal you want,” she advises, “go onto the BC SPCA website and if you see one you like it can be transferred in.”

Romany wants people do know there are several ways to help. “You can volunteer at the shelter or do advocacy work, make a change in the community,” she says. “We have five different teams who do everything from talks in schools to wildlife advocacy. If that isn’t for you, you can become a member of the shelter for only $30 a year and/or join the community council. Most importantly, make sure you adopt your pets and don’t buy them. If you do buy them, make sure they are spayed or neutered.”

Until all animals are safe and treated humanely, Romany Runnalls will continue to be one of the voices for creatures who cannot speak for themselves.