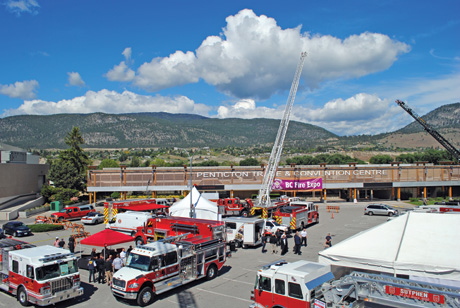 The new year is off to a busy start at the South Okanagan Events Centre, with a record number of people passing through the buildings' doors within the first two weeks of March. Upwards of 35,000 people visited the facilities during a 17-day stretch.

“It’s been non-stop, just the way we like it,” said Dean Clarke, General Manager and Regional Vice President in a press release.

“Starting with the Kip Moore concert (Feb. 19), Penticton Vees final regular season home game (Feb. 24), BC Winter Games (Feb. 25 to 28), Harlem Globetrotters (Feb. 29), BC Interior Division semi-finals, game one and two (March 4 and 6), Megadeth concert (March 5) and the 21st Annual Canadian Home Builders’ Association South Okanagan Home and Reno Show (March 5 and 6), we’ve welcomed over 35,000 people through our doors over past two and a half weeks. The diversity of the events, as well as the crowds, has certainly kept us hopping and we’re not slowing down.”

Since then, the SOEC has also hosted the 2016 Canadian Sports School Hockey League (CSSHL) Championships, the first round of the BCHL junior A hockey playoffs, a Hometown Hockey broadcast live on the SOEC Plaza and the Okanagan Similkameen Healthy Living Fair.

“It’s exciting for us to host such a wide array of events on campus, but the most satisfying part of hosting these events is to see how well attended they have all been,” remarked Clarke. “Accommodations in Penticton are filling up quickly, the City is buzzing and attendance at these events has been record breaking. The 21st Annual Home and Reno Show reported a 25% increase in attendance and the Megadeth concert sold out. It’s all positive.”

Don’t miss a minute of the action. For a full listing of events, please visit: www.SOEC.ca and www.PentictonConventionCentre.com. Tickets for upcoming events can be purchased online at www.ValleyFirstTix.com, by telephone at 1.877.SOEC.TIX (763.2849) or in person at the Valley First Box Office (at the SOEC) and Wine Country Visitor Centre.