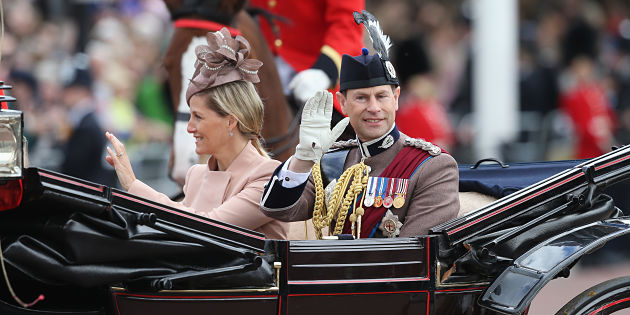 Prince Edward will visit Kelowna this September, including stops at two Okanagan wineries. Prince Edward, the youngest child of Queen Elizabeth II and Prince Philip, will be accompanied by his wife, Countess Sophie Rhys-Jones.

Their Royal Highnesses The Earl and Countess of Wessex will be in British Columbia from September 12 to 16. While in B. C.,  the royal couple will participate in various events with The Duke of Edinburgh’s Award and a wide cross section of community organizations.

On Sept 16, their Royal Highnesses will be in Kelowna where The Countess will present young people with their Duke of Edinburgh Gold Award at Mission Hill Family Estate. The Earl will visit Regional Forest Fire First Responders at Cedar Creek Estate Winery. The final event of Their Royal Highnesses’ visit to British Columbia will be a dinner hosted at Mission Hill Family Estate in honour of The Duke of Edinburgh’s Award Charter for Business.

PHOTO: Sophie, Countess of Wessex and Prince Edward, Earl of Wessex return to Buckingham Palace during the annual Trooping the Colour Ceremony on June 15, 2013 in London, England.

On Saturday, Sept. 13, The Earl will attend events with the Royal Canadian Navy and then present young people with their Duke of Edinburgh’s Gold Award during a ceremony at Government House. The Countess will visit Jeneece Place (Children’s Health Foundation of Vancouver Island), Our Place Society, and the University of Victoria. The Lieutenant Governor will host a dinner that evening for Their Royal Highnesses and First Nation leaders.

On Sunday, Their Royal Highnesses will travel to Vancouver where The Earl will attend a Duke of Edinburgh’s Award luncheon and tour the Vancouver Art Gallery, while The Countess will tour the Blusson Spinal Cord Centre, hosted by Rick Hansen. That afternoon, Their Royal Highnesses will walk a portion of the Trans Canada Trail through the Capilano River Regional Park and then attend a reception to thank volunteers.

On Monday, Sept. 15, Their Royal Highnesses will travel to Ditidaht First Nation on Vancouver Island to officially open a new library as part of the Lieutenant Governor’s Write to Read Project. Following the library opening they will visit the ‘Namgis First Nation in Alert Bay for a range of community events.

The Lieutenant Governor will accompany Their Royal Highnesses to most of the visit events.