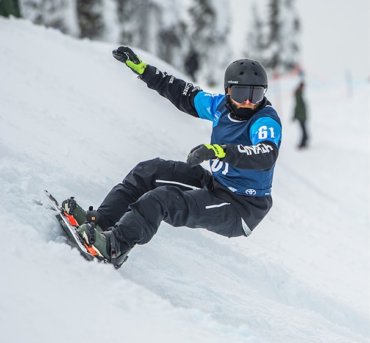 "We are entering our 7th straight year of Para-snowboard events at Big White as we get ready to once again welcome the world to British Columbia and Canada," says Cathy Astofooroff, Head of the Local Organizing Committee and Executive Director of BC Snowboard. "We are honoured to be able to provide these athletes with the platform from which they can promote and progress their sport."

"The Big White World Cup stop has always been a favourite of mine. I was named to my first ever Paralympic team here in 2014, and I’m incredibly proud to compete on home soil for the 7th straight year," says John Leslie, a two-time Paralympian and long standing member of Canada’s Para Snowboard team. "I’d like to invite all Canadians to come out and cheer on Team Canada as we take on the rest of the World Cup field," says Leslie.

"We are incredibly supportive of Big White Ski Resort’s bid to host a FIS Snowboard Snowboardcross World Cup in 2020. Not only are these domestic World Cups a great opportunity for our athletes to compete in front of friends and family, but they also serve as a chance for fans to see and interact with their Canadian Olympic heroes. The sport benefits are important for grass roots and high performance, while every bit as great are the additional economic benefits, increased tourism, and sport development opportunities these major events bring to the region," says Dustin Heise, Executive Director for Canada Snowboard.