Posted by Gillianne Richards | Jan 22, 2015 | Artists of the Okanagan, Culture 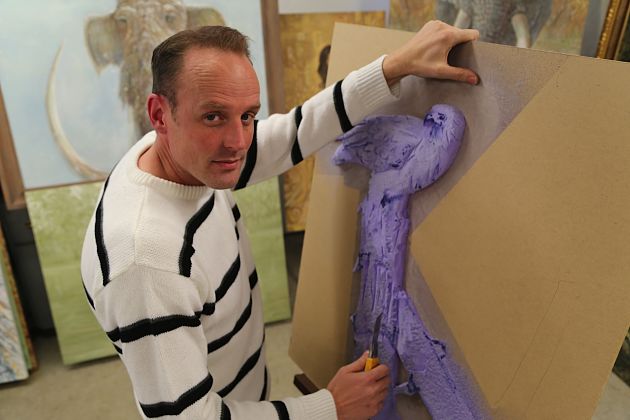 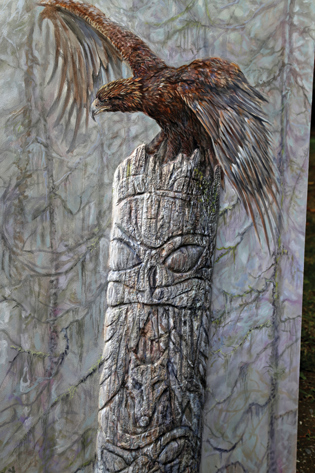 I’ve been invited to check out the work of Okanagan artist Jeff Fraser who’s been developing his own way to create three-dimensional paintings, something he’s coined “Levo Art.” The name comes from the Latin word meaning to raise or elevate, which is exactly what Jeff intends to do, not only with his physical pieces, but hopefully to the spirits of those who view them.

I arrive at his studio in east Kelowna and feel a rush of excitement when I walk into a large room filled with giant vignettes of natural and mystical scenes, exotic animals, fantasy settings and beautiful close-ups of Okanagan flora and fauna, all of which reach beyond the borders of traditional painting. His process requires a lot of technical skill, patience, and an incredible amount of raw talent. First he custom designs flush-mount boards that act as the base of the canvas. Then he applies spray polyurethane foam, which will be carved into shapes and sanded down to perfection. Finally he begins the actual painting and let’s his imagination do the rest.

I run my hands along the pictures: a totem pole, a trestle, a black crow, an eagle just beginning to take shape. I’ve only seen modern versions of this type of three-dimensional work a handful of times before, but I love the idea of having a relief or sculpted piece of art to hang up at home. The thrill of touching them adds an extra sense of novelty and pleasure you just can’t get from a flat canvas. Especially if you’re one of those people whom, like myself, finds therapy through physical contact. It’s like Braille for the emotions. To be able to take in art through the tips of my fingers as well as my eyes feels so natural and relaxing that for a moment I get lost in a distracted embrace with the trunk of an African elephant he has along the back wall. Jeff startles me and we get back to our talk about his vision with Levo Art.

“I love the idea of inspiring others to be creative and innovative, it takes a lot of courage to do something different, especially with something as prestigious as art, I’ve never been driven by money, I paint like it’s from my soul.” He wants to be doing something that both sets his work apart from the rest of the crowd and acts as a beacon to patrons from afar. Jeff figures if he’s willing to try innovative techniques and can put in the effort needed to get noticed, it will be good for the image and clout of our local culture scene as a whole. Says Jeff, “My goal is to get Kelowna excited and to move forward. I’d just like to see Kelowna become what it should become, a Mecca for culture and art.”

He makes an interesting point. There are a lot of professional and hobby artists in the area and the quality of the work is across the board, but in general I believe the Okanagan to be a very fertile place for new and exciting ideas. What’s important is to have a healthy quantity of art being made and shared, regardless of how “good” it is, in order for there to be an infrastructure that supports a creative economy. Then from the masses we need a handful of heavy hitters who are iconic enough with their original ideas that their very presence in the Valley increases our cultural appeal and value. Daphne Odjig and Alex Fong are good examples.

Jeff is working hard to make it there too. “I love art more than anyone, all of it. The idea behind Levo Art is like the meaning of the name, to raise or to bring something forward.” He’s committed to showing the world the possibilities of his newfound medium and is excited to bring his work to new levels. His incredible talent and courage fuel what makes him an even bigger asset to the community; he is one of the artists among us with a hunger to do something different, who will risk breaking free from the norm or what’s expected and in turn raise the bar and add to the richness of our culture. 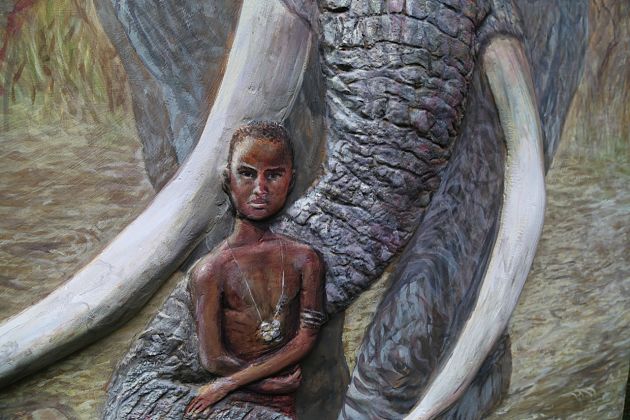 Listen to Andrew Allen's I Wanna Be Your Christmas

Our December issue features the Best of the Okanagan readers' choice awards. On the cover is the Okanagan Best Musician Andrew Allen. We have some Choral Magic as Okanagan choirs sing it high and we're in the kitchen with chefs Steve Kooijman (Friesen's Countrytyme Gardens) and Stewart Glynes (The Bench Market), both award winners for Best Breakfast.