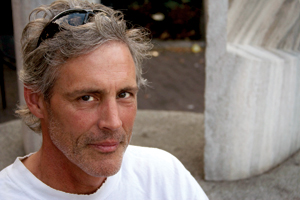 Thick dark blood is about to drip into my eye. I’m in the back yard of a little house near Knox Mountain. The guy sitting next to me throws money and a knife on the table as weird noises circle around the yard. Suddenly, he’s sucked up into the air by an unidentified beast that tears into him, splattering the mess across my face and into my left eye. It burns, but I don’t flinch. The beast looks me over. I let out a blood-curdling scream.

I just shot my first movie role in the science fiction psychological thriller Toyfa, an Okanagan production. Of all the sub-cultures in the Valley, the different niche hobbies and interests that are popular around here, I willingly confess that I’ve always wanted a closer look at the dark side of independent cinema, so I jumped at the chance to be massacred in close-up.

There’s a long history of film production throughout the Valley, from small series classics like Gold Trails and Ghost Towns to high-end Hollywood productions like The Pledge. Perhaps the biggest cult following comes from locals who love the gore and glory of the classic horror/sci-fi movie that are spawned on scraps in our own backyard.

Darryl John of Kamloops is the devilish genius behind an upcoming festival called Fake Flesh Film Fest. After years of making movies like the B grade slasher 6, he’s involved enough people in his films to fill a theatre, so he decided to rent one and turn it into a festival so everyone could enjoy their work on the big screen. It’s a unique, but equally valid way of sharing art with the community. “One thing I realized,” says Darryl, “is the large amount of people in this area who have either trained to work in movies or have done big budget movie work, and have relocated here, and now have no movie projects to work on. So finding qualified help has never been a problem.” The horror genre can bring a high return for low cost. Darryl finds that if he builds it, they will come.

Stace Williamson also knows what it takes to make murderous movie magic. He stars in Toyfa and wrote, directed and produced it, too. His fairly extensive theatrical training has served him well. Even at a pre-production meeting downtown, he relates in a way that holds the audience (me) in an animated state of suspense. He thinks a-mile-a-minute, speaks in perfect soliloquy and has ideas pouring out faster than the waitress can top off his coffee. When a guy like this offers you the role of a hooker who gets killed in the first scene of his movie, you answer, “Yes!”

Working with his renowned crew, James Dow and Don Ferguson of Techyou Media and Karl Narinesingh of Ninth Floor Creative, is also a huge incentive.

My scene may only last a minute but the hours of work that go into organizing crew, setting up locations, filming, editing and more, blows my mind. Doing it right, says Stace, takes time. Like other art forms, it also seems to take a type of heart and courage that only true artists possess. “I went out in the community and found a lot of people interested, and a couple who had the guts to really see something through. A lot of people say they want to, but when it comes down to the nitty gritty, making a full length feature with no money, no budget, you have to pull it out of a hat. But by doing that you learn how to make movies, you really do. People are like, ‘Oh, if I get this much money I’ll make a movie.’ But you need to just start making it, make it on your phone. If I were waiting for money I’d still be waiting. People always think you’ve got to get motivated by money, but you’ll never make it in the real world of film if that’s all your motivated by.”

Words of advice that apply to all the creative professions, whether it’s oil painting or blood splattered movie making, how big your art becomes is up to you. ~Gillianne Richards