Okanagan has a bright future in technology, says Minister 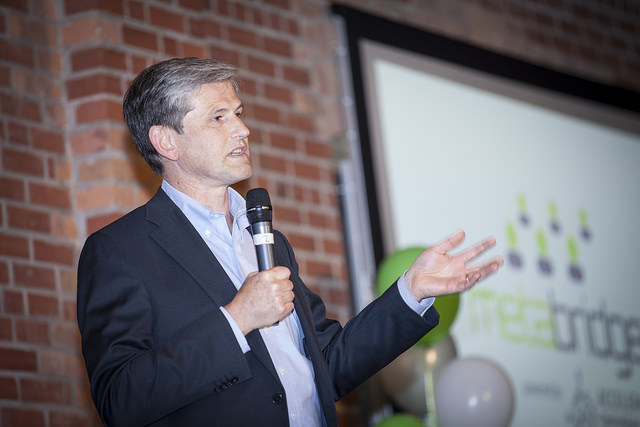 Speech from The Honourable Andrew Wilkinson, Minister of Technology, Innovation and Citizens’ Services.

This is an exciting time for Kelowna’s technology sector and for Accelerate Okanagan. I’d like to extend a warm welcome to the new CEO, Pilar Portela, who has joined us from California and brings a wealth of experience.  The previous CEO, Jeff Keen, has said farewell in his official capacity with Accelerate Okanagan, but he remains a leader for tech and business development in the region.

I’ve had the opportunity to visit Kelowna on two occasions this year. In June, Accelerate Okanagan (AO) hosted the 2014 Metabridge Retreat and it was truly inspiring to speak with so many bright, ambitious entrepreneurs from across Canada. In July, I joined Premier Christy Clark to celebrate the announcement of the B.C. government’s $6 million investment in the new Okanagan Centre for Innovation. This is an opportunity for the tech community to come together and build the future together.

With construction now underway, Premier Clark recently returned to tour the building site and get a first-hand look at the work being done on the ground. By the time the centre is completed, approximately 500 construction jobs will have been created, and the new building will have room for 300-500 entrepreneurs, employees and tech developers.

We look forward to offering the provincially-owned space in the building to early stage tech start-ups and entrepreneurs, and are pleased that they will be under the same roof at Accelerate Okanagan. With the entire building being a dedicated, affordable work space for entrepreneurs, students and start-ups, this centre will be the one of the largest dedicated technology buildings of its kind in B.C. Kelowna already boasts the third largest tech hub in the province, and all signs point to continued strength for the region.

The positive results coming out of the area are in no small part thanks to the AO team, including four dedicated Executives in Residence. Local entrepreneurs can take advantage of services such as the BC Venture Acceleration Program (VAP) – funded through the BC Innovation Council – which continues to deliver great results. For example, WTFast (VAP client since 2011) has hired 13 employees and five student contractors in B.C. since joining, and has recently expanded business into Southeast Asia and Brazil. On the other end of the program is Festfeed, one of AO’s latest VAP participants, who can look forward to the exceptional services provided through this program.

In addition to supporting the Venture Acceleration Program, the government has made strategic employee placements in the Okanagan to facilitate collaboration between research and development, industry and communities. Through funding from the BC Knowledge Development Fund, the government has also supported the new Survive and Thrive Applied Research (STAR) facility at UBC’s Okanagan campus, where industry and academia collaborate on survival technologies for extreme and remote conditions.

Finally, congratulations go out to West Kelowna this month for earning the 2014 Employer Award for Career Enhancement and Success of Technology Professionals from the Applied Science Technologists and Technicians of BC. This is another testament to the great entrepreneurial spirit this region is known for.

The Okanagan clearly has a bright future in technology, and it is a pleasure to be a participant and facilitator in building this future.

The post Message from the Minister appeared first on Accelerate Okanagan.