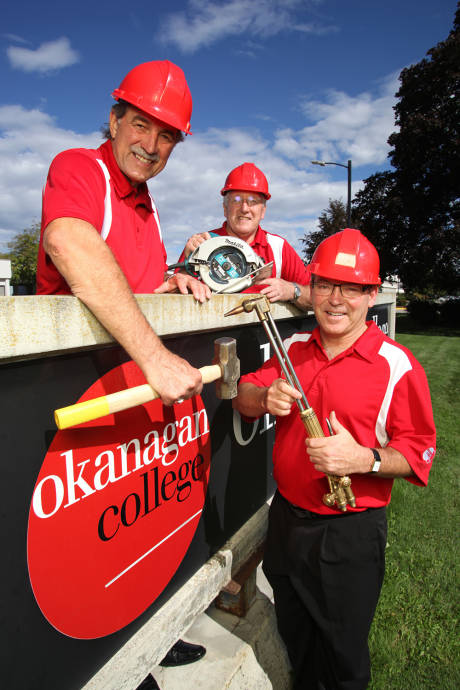 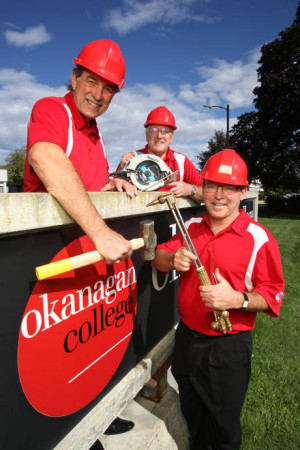 Three enthusiastic supporters of both the trades and Okanagan College have offered to head up the campaign team to raise funds for the new Trades Training Complex at the Kelowna campus.

Ben Stewart, Dennis Gabelhouse and Mike Roberts will be front and centre as Okanagan College ramps up its efforts to raise $7 million towards the new $33-million Trades Training Complex to be located on KLO Road.

Stewart, who was the Westside-Kelowna MLA from 2009 until this spring, is taking on the role of Honorary Chair. Gabelhouse, who has a lengthy background in media and marketing – most recently at Global Okanagan – will be the Campaign Chair, while Roberts, a retired veteran broadcaster and Okanagan College Honorary Fellow, has signed on as Campaign Ambassador.

“We are fortunate to have the support of these important members of our community as we embark on this campaign,” said Okanagan College president Jim Hamilton (see Progress 2010). “All three are longtime friends of the College and each has contributed to the success of this institution or our community in a meaningful way. Their commitment to the goals of the campaign is admirable and I am confident that commitment and enthusiasm will do much to serve the thousands of students who will benefit from our new Trades Training Complex.”

Alf Kempf, president of the Okanagan College Foundation, said he’s excited that the campaign has generated such strong volunteer leadership.

“This is a stellar team with a clear vision for the instrumental role that skilled trades will play in the future needs of B.C.,” Kempf said. “I’m confident that these three can do anything they set their minds to.”

The campaign goal is to raise $5 million towards the capital costs of the project, plus another $2 million for programming and student support. The provincial government has contributed $28-million to fund the project.

“This is an important project for the entire region,” said Stewart, who founded Quail’s Gate Estate Winery and appreciates the trades from a worker’s perspective having taken night courses at the College in arc-welding, oxy-acetylene gas welding, and construction. “We are in an unprecedented situation in B.C. in terms of the skills shortage and we know that workers will be needed throughout the province to address many of the initiatives the province is undertaking – from oil and gas to shipbuilding.”

Gabelhouse said this new facility will be the largest trades training centre between the Lower Mainland and Calgary, and will act as a beacon for many young people to enter the trades.

“This innovative and environmentally sustainable facility will help to elevate the perception of the trades and reinforce the important role Okanagan College graduates play in establishing a robust economy that will secure B.C.’s future,” Gabelhouse said.

Roberts, who has lent his support to many successful community initiatives, said he can’t wait to get started.

“It’s easy for me to endorse what the College is doing and I’m pleased to assist in any way I can,” he said.

The Trades Training Complex will provide space for more than 2,400 full-time trades and apprenticeship students. The complex is being designed to meet Leadership in Energy and Environmental Design (LEED) Platinum standards, and includes a 5,900 square metre expansion, along with a complete renovation and retrofit of another 4,400 square metres.

The project broke ground in September 2012 and is expected to be complete by Spring 2016.