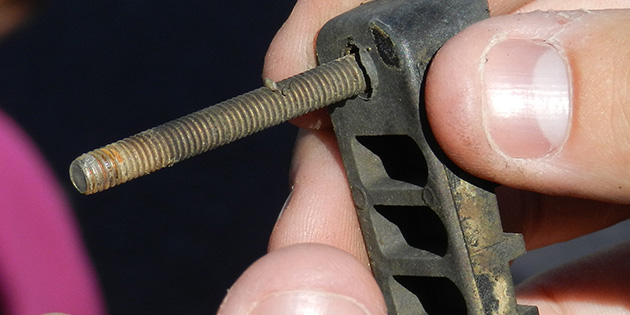 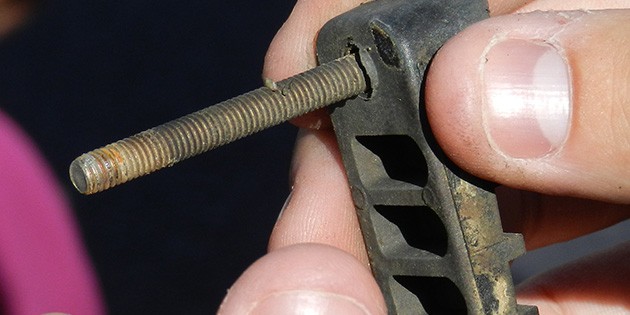 Those attending an invasive mussel inspection workshop this week got more than expected when a boat carrying the concerning molluscs showed up for an actual inspection and decontamination.

The workshop, held in Kelowna’s Cook Street Boat Launch parking lot last week, was organized by the Okanagan Basin Water Board and its WaterWise Program’s “Don’t Move A Mussel” initiative in partnership with the B.C. Ministry of Environment. It was geared to marina and yacht club operators but included RCMP boat program and local government bylaw staff, as well as Okanagan Nation Alliance fisheries representatives.

“It was an incredible opportunity to view the actual mussels on a boat first-hand and then discover just how hard it is to detect them,” noted OBWB Operations and Project Manager James Littley.

As it turns out, an Ontario couple owns the boat and is now moving to the Lower Mainland. The boat was moored in zebra mussel-infested Rideau Canal for a couple months before being transported to its new home. The owner inspected the boat in Ontario before leaving that province. The boat was then stopped this past weekend by Alberta inspectors and, when mussels were found, it was decontaminated. Alberta followed up and called the B.C. Conservation Office (C.O.), in charge of inspection and decontamination in B.C., to tell them a boat was on its way. The boater was then ordered to come to Kelowna for a follow-up inspection. The boat pulled into the parking lot where the training was taking place and within a few minutes, B.C. inspectors detected several sand grain-sized mussels around the boat’s legs, trim-tabs and props.

The boat had reportedly been out of water for 30 days and properly drained. Still, not taking any chances, after the inspection in the parking lot and taking a sample, the boat was moved to a gravel location for decontamination. The mussel samples have been sent to a lab to be tested to determine if they were alive or not. It is illegal in B.C. to transport the mussels dead or alive. According to provincial staff, there have been at least 15 high-risk boats decontaminated in B.C. so far this summer. Further testing suggests none had live mussels. However, several fines have been issued, including for failure to stop at an inspection station. Some boats have also been quarantined to ensure they were out of the water and dry for 30 days.

News of this latest incident has left OBWB Chair Doug Findlater shaking his head. “While B.C.’s Conservation Officer team is conscientious and taking this seriously, we still don’t have a lock down system in place.

“The fact that this boat had to go through two inspections and decontaminations, shows how difficult it is to fight this. If we are going to be successful in keeping these mussels out of our waters, it will take serious vigilance.

“We are still relying on others to let us know when an at-risk watercraft is coming into B.C. And we’re relying on an honour system,” added Findlater. “This boater was asked to find their way to Kelowna to be checked and they did. That’s great, but what if they hadn’t, and what if they had live mussels and launched their boat in B.C.?”

Last March, the province announced $575,000 in 2015-16 to help fight the mussels, with the majority of the funding going to three roving inspection crews (with two COs each). Another three roving teams were announced in July, thanks to funding from Columbia Basin Trust. While the Water Board is supportive of roving inspection stations, it has been calling for permanent and mandatory stations, as has been done in Alberta and many other U.S. jurisdictions. In particular, the OBWB has called for stations at the five main highway entry points on the B.C.-Alberta border. Last year, the province estimated an effective inspection program would be about $2.4 million per year (15 stations at a cost of $60,000 - $160,000 each per year). Research conducted for the OBWB estimates the cost of an infestation would be $43 million to the Okanagan alone.

“We know the cost of prevention is much less than the cost if the mussels get in,” Findlater said. “We are looking forward to talking with the province at the Union of BC Municipalities convention in September, pushing for better funding and stronger action.”

While boats remain the most common way the mussels hitchhike and infest new water bodies, they will attach to any hard surface including paddleboards, kayaks, fishing gear, lifejackets, etc.

For more on the risks invasive mussels pose to the Okanagan and prevention tips visit www.DontMoveAMussel.ca.

A reminder that the OBWB’s Annual Meeting is Sept. 4. Keynote speaker is Julia Lew, with the Southern Nevada Water Authority. Lew will be presenting on the agency’s invasive mussel response and management in Lake Mead. Details at: www.obwb.ca/annual-meeting-september-4-2015/