When community support is part of your business plan, success follows all around

Florenda Pickett had no idea, when she was freed from her corporate bonds, that she’d end up helping so many women in ways she had not yet imagined.

Florenda was at the top of her corporate game when the company moved to Ontario. The hard-core sewer decided to stay here and open a fabric store, which also carried material for making bras. When her friends heard of the idea, they asked her to make them custom bras. She changed her business plan and opened Esteem Custom Foundations. Within months, the demand for her product wildly exceeded her ability to create the sheer volume required. Another tweak of the business plan and in 2006 Florenda opened Esteem Lingerie, bringing in the best bras she could find.

She discussed the new store with her daughter, Angela O’Brien, who then lived in Ontario. Before the dust could gather on the newly renovated store floor, Angela had moved back to the Okanagan and the two were in business together. That’s when the magic happened.

“It was January of 2007 when we started the dead bra program,” says Florenda. “Part of our business plan was to give back to the community and this was one way we knew would help. We give the good bras to Women’s Shelters across BC and use the older ones for spare parts.” To date they’ve donated 45,000 bras.

Dorthea Young heard about their dead bra program and told Florenda and Angela about a bra program that supported a cancer clinic in Mexico. “We found out exactly what they needed and how the program worked and we now gather bras for that pro gram too,” says Angela. “They need non-underwire bras to sew mastectomy pockets in them to hold a prosthesis. We have donated 300 gently used bras to the Cancer de Mama Clinic in La Penita, Najarit, Mexico, program over the past four years.”

Aside from collecting, fixing and donating bras, in 2007 they started a golf fundraiser, called Linked Together, for the Kelowna Women’s Shelter. To date they’ve raised and donated $118,296 to the shelter.

“We give to the Women’s Shelter because Mom and I have not always had the easiest path to travel and in the past have been faced with domestic violence,” says Angela. “We have a fundamental belief that we are all interconnected and that when people aren’t doing well, our society can’t do well. The Women’s Shelter is about helping women develop the skills and boundaries needed to change their lives. Our passion is to help women in our community do better.”

Their latest venture, Lingerie Boutique 101, was started in 2010. Together they’ve helped seven lingerie stores get their businesses up and running smoothly. “In our industry there’s always been a lot of competition,” says Angela. “When we started our business we asked some stores out east to help us out. No one would.”

“After that,” Florenda adds, “we decided we would give advice to anyone who came to us and wanted to start a business, any business. We invite them in and give them all the resources that we’ve found.” The initial talk is free and businesses can hire the duo to do as little or a much as necessary to help them grow their dreams.

As far as life philosophies go, Florenda and Angela are on the same page. They want women to feel comfortable in their store, and they want people everywhere to be able to follow their dreams.

“When people remember that we are interdependent on each other, and make it part of their practice to give back in any way that inspires passion, that’s when we can see great changes in our society,” says Angela. “It’s not about the big gestures, it’s about the little ways we help each other every day.” www.esteemlingeriegroup.ca 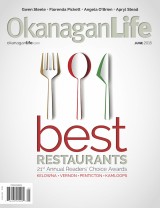 Our June issue features the Okanagan Valley and Thompson’s Best Restaurants Awards – now including Kamloops restaurants. Thanks to all our readers for helping us present these awards for the…