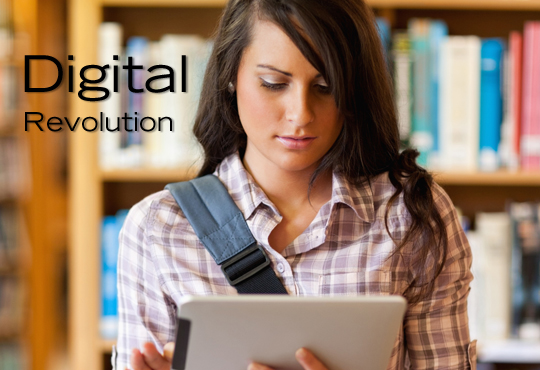 Full steam ahead, local libraries leap on board, refashioning themselves in the image of the digital age. But, true to their public service mandate, their core values remain the same. ...

You shouldn’t spill red wine on them. You can’t pass them to a friend when you’re finished, donate them to a third world country or renew them when you run out of reading time. But with an environmentally friendly, lightweight eReader you can download books from your library 24–7 from the comfort of your armchair. And eBook converts rejoice: overdue charges are a thing of the past. Finished or not, at the end of three weeks the digital text magically disappears.

A bonus for travellers, people waiting for medical care, delayed flights or BCAA roadside rescue, these portable gadgets can store hundreds of books on something thinner than most magazines. And with no telltale covers, no one can see whether you’re reading Tolstoy or a trashy romance.

“A 1,400-page novel is just too heavy to lug to the beach every day, so an eReader is the perfect solution for Puerta Vallarta,” says Marla O’Brien, Okanagan Regional Library (ORL) public relations officer. Pack the baby wipes for touch screen cleaning and you’re good to go.

ORL public services manager, Pam Medland, reports a tenfold explosion in eBook circulation in the past two years. “During 2009 there wasn’t much interest, but things changed when eReader gifts skyrocketed at Christmas 2010,” she says.

Now library cardholders can access material for their eReaders from two sources. The Okanagan Regional Library system, with 29 branches from Golden to Osoyoos, holds about 3,000 titles, while the consortium of BC Libraries offers more than 17,000 eBooks and audiobooks, including titles in 10 languages other than English.

The popularity of eBooks is spanning generations, although some segments are catching on faster than others. Maureen emphasizes that there’s no substitute for a parent sharing a book with a child, and interactive books are no alternative for interaction with parents, but parents can still make use of the new technology. ORL provides eResources for Kids at

www.orl.bc.ca with links to TumbleBooks, animated talking picture books including fiction, non-fiction and games in English and other languages. Popular for older kids, TumbleRead-Alongs are chapter books with sentence highlighting and narration, but no animation.

Surprisingly, the results of a recent community survey and focus group indicate that eBooks are finding a tougher go among teens. “Teens are reluctant to use eBooks,” says Pam. “There is a feeling among some teens that they want hard copy books for leisure time reading. They’re tired of computers all day. They think print has a retro coolness, like wearing ’60s clothing.”

You’d think that teen grads would be thankful for a wave of new eBook options, though. According to the Canadian Federation of Students, the average post-secondary student in Canada spends about $500 to $1,000 on textbooks and course materials each semester. Students are coming to appreciate eReader downloads that are cheaper and more portable than heavy textbooks. Sayeeda Hussain of McGraw-Hill Ryerson Canada says a traditional textbook that sells for $125 could cost just $60 to $80 in digital format.

Educational institutions are beginning to adopt the technology. Beginning last September, new students at Vancouver Career College, which has a Kelowna campus, received an iPad preloaded with all their textbooks.

The library of Thompson Rivers University’s new law school in Kamloops is “predominantly digital,” says Anne Pappas, the school’s founding administrator. Okanagan College is also expanding its digital collection. “The total number of online items in our catalogue has grown from 38,000 in 2009 to more than 100,000 today,” says Ross Tyrner, director of library services. “eBooks, along with other digital formats—especially electronic journals—account for an increasing proportion of our overall collection, up from 22 per cent in 2009 to 40 per cent in 2011.”

But students remain somewhat reluctant to accept eBooks. “They are less enthusiastic than we might have guessed,” says Ross. “One of the reasons is that while a 10- to 20-page journal article is perfect for reading online, the same cannot be said for a 300-page book. Students’ attitudes are sometimes changed when they learn they can download individual chapters or sections of many of our eBooks.”

Not wanting to be left on a platform reading a paperback when the library technology train rolled out of the station, I bought an eReader. Being a diehard travel junkie, my choice was a slim, candy apple red SonyReader Pocket Edition with Wi-Fi capability, perfect for directly downloading library books while sitting at some remote Asian Internet cafe.

But even though I’d made it to the Internet age, I knew I’d need help. I signed up for a one-on-one half hour orientation session at the Vernon library with reference supervisor, Alex Bradley. He walked me through the steps for downloading a book from the BC Libraries and ORL websites, demonstrated various research tips and answered all my questions with incredible patience.

“You can download five eBooks or audiobooks from the BC Libraries’ site and five from the ORL’s own collection at any one time,” he says. Wow, 10 books at once. Time to get reading before they disappear.

Even before the eReader explosion for Christmas 2011, libraries predicted changing demands on staff time and were quick to get on track. “During the summer and fall of 2011 we sent two librarians out to all the branches to provide a minimum of one-and-a-half to two hours of one-to-one staff training,” says Pam Medland, who says the goal was to familiarize staff with the process that customers would face so that they could empathize and help. “We have been overtaken with requests for help with eReaders and eBooks, how to find titles, how to download.”

Alex Bradley says that during the peak period, staff at the Vernon branch information desk were getting 20 requests a day, in person and on the phone, ranging from how to download eBooks to how to turn on their eReader. “People were having difficulties and giving up. Initially it was hard to be helpful in any meaningful way as there are so many different machines. Fifteen to 30 minutes of every hour was taken up with something to do with eBooks.”

To address the demand and to ensure that non-eReader questions weren’t ignored in the crush, Alex decided to run the orientation sessions. The first round finished in March, but he says more sessions may run in the fall and certainly in January 2013 to deal with the post-Christmas crowd.

Maureen Curry notes a side benefit of the eRevolution. “The good thing is several of the people who register for the eBook orientation have never been to the library before, so new people are coming to the library and learning about us.”

Another challenge facing libraries is the issue of digital rights. Victoria Times Colonist reporter, Kim Westad, explains. “Even though the demand for eBooks is exploding, the supply isn’t. The majority of major publishers in North America will not sell eBooks to libraries. For example, you can download the Stieg Larson trilogy at the library, but not the new Stephen King—different publishers, different rules.”

“All the large publishers of best-selling fiction sell eBooks commercially, but only two will sell new eBook titles to libraries in Canada,” she says. As well, there is a concern that, while print books wear out, eBooks don’t, so libraries don’t have to buy replacements. Consequently, libraries must pay at least double the list price for eBooks.

Libraries also have strict agreements with publishers about lending eBooks. Publishers put digital locks on the books so that for each licence they can be loaned to only one user at a time for a maximum of three weeks. When they come due, access is automatically cut off. Locks also prevent the transfer of eBooks from one device to another.

In spite of the restrictions, however, there are benefits. Libraries can get away with buying fewer copies of new best sellers. “We used to have to buy about 75 copies, then after two years would need only five, so would sell them at used book sales,” says Pam. “The advantage of eBooks is that the wait lists and copies are digital.”

Environmentally, this means less truck traffic to transport print copies on inter-library loans. If your name is on the wait list for a book, Library to Go will send an email when the title is available. Alex says, “You have three days to respond and download from the time the email hits your inbox, day or night.” For those who are feeling impatient, ORL has a few titles that are always available.

“Many library patrons enjoy the portability and flexibility of an eReader,” says Alex. “For travel, visiting friends and trips to the cottage, it provides more flexibility.”  As well, the font size is often adjustable, most models provide dictionaries, and you can buy books with prices generally lower than print counterparts.

The Future is Now

Libraries are not only surviving, they’re thriving. The use of eBooks is expanding exponentially, although they’re still only a small part of the overall library service and experience. ORL circulation for print format items reached 3.5 million in 2011 compared with 29,000 eBooks. But technology is a powerful draw. “The library provides training for digital literacy and access for those who do not have computers or eReaders. It also stops isolation, particularly in large cities,” says Calgary Public Library direct, Gerry Meek.

It’s hard to predict what will happen to the physical space of a library as its holdings become increasingly digital. Gone is the era of the prim librarian, gazing over horn-rimmed specks, index finger to lips, sternly shushing patrons who dare to whisper.

“There is a new perception of what a library can do,” says Gerry. “They are moving toward the concept of a welcoming community bazaar, an action centre, a versatile social utility that invites you in, creates engagement and connection, promotes discovery and excels at [ delivery.”

The new Vernon Library, which officially opened on May 5, 2012, is a case in point. “Space in the new library was planned with as much flexibility as we could incorporate into it,” says Maureen Curry. “Shelving is removable so space can be used for other purposes as the collection changes and is digitized. There is a raised floor for wiring and extra outlets to accommodate the dramatic increase of people with laptops accessing the free WiFi.” The multipurpose room is another key component. “It’s available for meetings, offering use of a sound system, technical components and projection capabilities.”

“Libraries are the community living room,” says Gerry. “They are high quality public space that invites all in, creating a sense of community as well as shared solitude.”

“We provide space for all ages, all users,” says Maureen, “children’s programming for beginning readers, a quiet place for homework for students who need it, a space for adults to read, research or connect with others as well as access to technology for those unable to afford their own, thus preventing a digital divide. We have such a supportive community. We want them to feel that the library belongs to them.” ~ Patti Shales Lefkos

Project Gutenberg Canada eBooks on this website, largely classics, historical works and early children’s books, are in the Canadian public domain, offered at no charge.

Open Library This site is an initiative of the non-profit Internet archive, with more than one million free eBooks, browsable by subject, author or list.

Tryharlequin.com Harlequin’s eBook site allows you to download 18 titles for free, although you are requested to fill in a short survey.