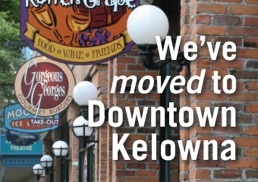 The Bernard Avenue Revitalization in downtown Kelowna has taken a top international prize. During its 60th Anniversary Conference and Tradeshow this week, the International Downtown Association awarded the City of Kelowna its Downtown Pinnacle Award for its work on its main street.

“Great cities have great downtowns and we’re pleased to see the hard work and $14 million capital investment being recognized internationally,” says Kelowna Mayor Walter Gray. “This main street revitalization project was undertaken to enhance downtown as a destination for our residents and visitors and at the same time strengthen our economy with placemaking opportunities.”

Bernard Avenue was among nine qualified entries in the category of Public Space, recognizing capital improvements that enhanced the urban design, physical function, or economic viability of downtown and the community.

“The Bernard Avenue Revitalization is a wonderful example for all cities to emulate,” says David Downey,  President and CEO.

This is the third award the City of Kelowna has received for this revitalization project. Previous awards include the Gold Award from the Planning Institute of B.C. in the category of Planning Practice, as well as a Gold Quill Award of Excellence from the International Association of Business Communicators for excellence in a government communications program.

“The construction was challenging for a number of our members, but collaboration between the City and businesses made it a success and the results speak for themselves,” says Peggy Athans, Executive Director of the Downtown Kelowna Association. “Kelowna residents should be proud of the unique business district on our waterfront that everyone’s support has created, along with the infrastructure changes that will only make this area more vibrant in the years ahead.”