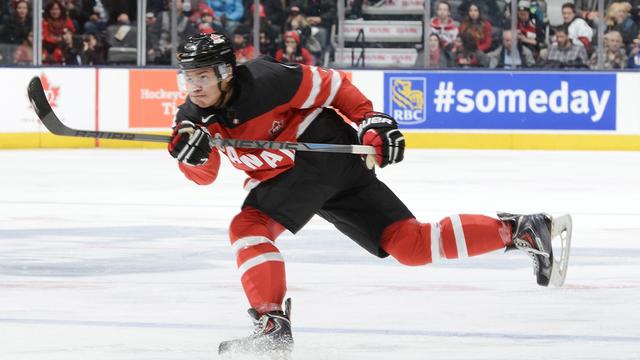 Bowey scored a goal and an assist Saturday night in the Team Canada 4-0 win over Germany.

#Canada scores a third PP goal as @m_bows4 finds the back of the net. @cmcdavid97 with his 3rd assist on 4 goals. pic.twitter.com/uQmMAirfNT

Morrissey, acquired in a trade with Prince Albert prior to the selection camp, is one of seven returning players and will look to anchor the blue line while Bowey makes the team as a 19-year-old after trying out for it last season.

Chartier, 18, in his first attempt to make the club, was one of the final players released at the conclusion of both the Sport Chek selection camp (Dec. 11-14 in Toronto) and pre-competition camp (Dec. 15-19 in Toronto and St. Catharines, Ont.)

Canada roster includes two goaltenders, seven defencemen and 13 forwards. The final roster for the 2015 IIHF World Junior Championship must be officially submitted to the IIHF by Dec. 25.

In total, 21 of the 22 players on the roster have previous international experience, including 20 with the national under-18 program, nine players of which won gold at the 2013 IIHF World Men’s Under-18 Championship in Sochi, Russia. Nineteen of the 22 players participated in the regional under-17 program at the 2012, 2013 and 2014 World Under-17 Hockey Challenges.