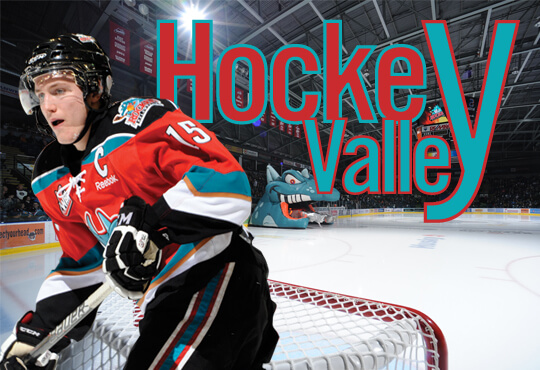 No question we’re obsessed with the national sport. Check out our Okanagan hockey highlights ...

The top prospects for the 2012 NHL draft will take to the ice at Prospera Place in Kelowna at the end of January. It will be familiar territory for two talented Kelowna Rockets. The Rockets’ right-handed captain Colton Sissons (#15) finished December with 20 goals and 27 points. Dubbed a defensive forward, Sissons’ proficiency at both ends of the ice may be just what the scouts are looking for in a multi-faceted player. Also on the scouts’ radar is defenceman Damon Severson (#7) who neared Sission’s end-of-year record with 20 points including four goals. With size, great skating and an ability to jump into the play, Damon’s talent may take him to the next level.

Spending time with their loyal fans is as much of a thrill for the Penticton   Vees as it is for the kids who join the team for their annual community skate. As of the end of December 2011, the Vees had six of the top 10 scoring leaders and were ranked #2 in Canadian Junior A hockey.

Jordan Krause is taking to the ice in the cherished red jersey. The young Kelowna defence is going for gold with Team Canada in the 2012 Under 18 World Championships in the Czech Republic.

“He has such passion for the game, an unbelievable drive to help me and all my teammates to improve. His strong character inspires me every day to just keep going,” she says. “As a result of his knowledge of the game and values as a person, I feel like I have one of the greatest opportunities in the world and am going to do my best to soak it all up.”

Having a powerful influence on hockey players is nothing new for Roy. As one of the most respected skating coaches in the world, he’s worked with national, Olympic and NHL teams. A former skating coach for the Philadelphia Flyers and Dallas Stars, Roy returned to Kelowna to start his hockey camps in 2003.

For young, Okanagan athletes, the support has propelled their careers. West Kelowna’s Justin Schultz attended the academy for two seasons prior to playing with the Westside Warriors. Chosen by the Anaheim Ducks in the 2008 NHL Draft, the young defenceman is attending the University of Wisconsin, playing for the Badgers and topping the leader board.

In the 2010 WHL Bantam Draft, Vernon’s Curtis Lazar, another academy student, went second overall to the Edmonton Oil Kings. The 16-year-old centre has already wrapped up 10 goals and nine assists in his 33 games this season.

Roy has touched the lives of many hockey players, sharing his passing and talent for explosive speed with a number of NHLers from Dany Heatley to Brendan Morrison.

“We’re not just a school for elite players,” say Roy. “Our goal is developing kids as hockey players and people.”

Roy and his wife have worked with kids all their lives and they believe that hockey is a great vehicle. With a half-day in school and half-day working on the game both on and off the ice, academy players improve their hockey skills and mental preparation.

The development of every player’s character and values is of equal importance to Roy. The academy provides players the opportunity to be involved in the community and in specific projects of service to others. Players have travelled to Mexico to build houses for the poor, sponsored children from Third World countries and served food to people off the street at Kelowna’s Gospel Mission.

“Strong values and life skills are not just talked about,” says Roy. “They are experienced.”

With the cup: Brent Gilchrist is a champion in so many ways. In 1998, he hoisted the Stanley Cup as a forward with the Detroit Red Wings. Today, he’s a champion fundraiser in the community. For 20 years, his invitational golf tournament has raised funds for the BC Children’s Hospital and the North Okanagan Neurological Association, reaching over the million dollar mark. Brent is just one of many NHLers living and coaching  in the Okanagan, supporting both charities and young player development.

In the net: Kids of all ages, like weekend warrior Greg Thierman (second row left) dream of shooting the puck like Wayne Gretzky, but the dream of any young goalie is to stop the puck flying off the Great One’s stick. In 1985, a Hersey Bears goalie got the call to the NHL when a tragic auto accident took the life of the Philadelphia Flyer’s number one goaltender Pelle Lindbergh. Darren Jensen (top & second row middle) now calls the Okanagan home and still revels in his victory over the defending Stanley Cup champion Edmonton Oilers.

Behind the camera: The game is long over but the highlight reels still run, thanks in part to Kelowna native Dimitri Gammer (top right), an associate producer with CBC. Clocking many hours in the Hockey Night in Canada “war room” Dimitri pulls footage for Don Cherry, Ron MacLean and Kelly Hrudey

In the OR: During last spring’s playoff run, Canuck fever was burning hot in the Penticton Regional Hospital operating room.

Cheers rise to the rafters in Rutland Arena as families root for their new hometown favourite, the Kelowna Chiefs. A development team for the Western Hockey League, the Chiefs provide a competitive level of junior hockey, attracting players who want to study at Okanagan College and UBCO. The team’s 2010 move to Kelowna was due in part to the efforts of Grant Sheridan who has taken the reins as assistant coach.

Hockey permeates Grant’s life. The Sheridans billet Kelowna Rocket Zach Franko and their seven-year-old son Tanner is busy with minor hockey. During the day, Grant keeps his coaching skills active, setting financial strategies for professional players through his work with the Peacock Sheridan Group. He says, “Hockey is my hobby, my business and my passion.”

At the Box Office

Ticket in one hand, pop and snacks in the other, fans head to their seats. A great crowd sparks spirit in the rink and adds millions to the local economy.

In 2011, the Kelowna Rockets, a franchise in the Western Hockey League that showcases the highest level of junior hockey talent in Canada, pegged the indirect annual economic impact of the team at $31.5 million.

UBC Okanagan economics associate professor Ken Carlaw, who headed up the study, looked at both the economic and social impact hockey can have on a community. For any young player, a chance to skate or meet with a hockey star is a thrill. For a vulnerable youth, hearing from a hockey hero could mean turning away from drug use. Ken points out that the Rockets’ investment in school outreach and charity programs is an investment in the social fabric of the community.

The Kelowna Rockets are among the top producers both in terms of pennants won and players graduated to the National Hockey League.

At least 20 former Rockets, most following their NHL careers, have returned to the Okanagan to live.

Downtown Kelowna is a buzz during a home game. Fans catch a quick bite before the game, out-of-towners stay at hotels, and special guests are wined and dined in corporate-sponsored suites. When the dollars are added up, nearly $15 million flows into local stores, restaurants and hotels as a result of regular season activities. And when the team makes the playoffs, another $5 million is generated for the local economy.