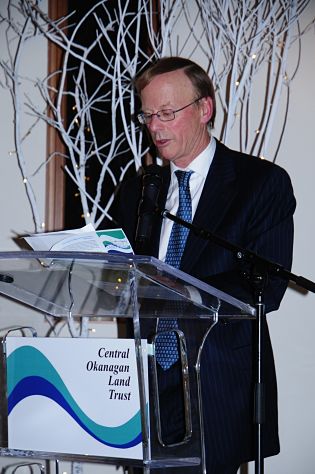 Retiring Central Okanagan Regional District chairman Robert Hobson said the family is hopeful the donation to the land trust can be doubled with matching donations from the community in the next two years, as the trust celebrates its 25th anniversary next year.

Hobson has served for 26 years on Kelowna city council. During that time he served on the Okanagan Basin Water Board and on the board of the land trust, headed up the regional district board for 21 years; and served for many years on the board of the Union of B.C. Municipalities, including a term as president, as well as a number of related boards and committees.

Hobson said he initially ran for office to ensure the preservation of four natural areas in the city, and all have now been protected.

During his time in civic politics, Hobson has been an outspoken supporter of agriculture, an advocate  for protecting air and water quality and the natural environment, as well as parks; and of preserving our heritage.

Hobson's donaton was made public at the Central Okanagan Land Trust at the inaugural fund-raising on the weekend.

He was honoured for his community service, along with the regional district’s parks program, which marked its 40th anniversary this year.

More than 100 people attended the gala fund-raiser at Bottega, which raised more than $40,000, including donations, to further the work of the land trust.

Central Okanagan Land Trust owns more than 800 acres of the central Okanagan’s natural features, much of which is enjoyed as parkland, including the new Johns Family Nature Conservancy Regional Park and the Benvoulin Woods on the Mission Creek Greenway. It also holds protective covenants on a number of other natural features, such as Thomson Marsh, protecting them for future generations. Its mandate is to conserve land for wildlife and parks.

For more information or to make a donation, go to the website at: www.coltrust.ca