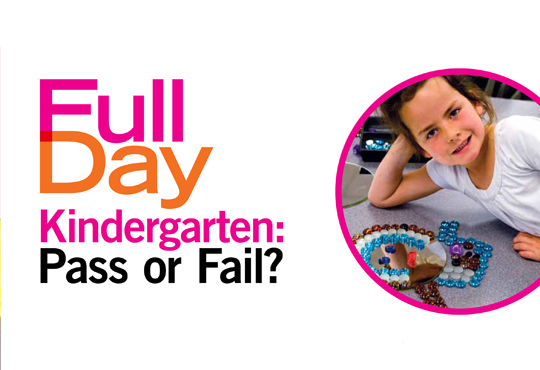 The announcement that all children in BC would be offered full-day kindergarten by September 2011 garnered mixed reaction on all fronts. One year into the program, stakeholder reactions are more united.

Would five full-days be too much for kindergarten-aged children? Would kindergarten children be safe in school playgrounds? Would there be a new curriculum that looked like a mini Grade 1? Were there enough trained teachers? Was there enough time to prepare for opening some classes in September 2010?

Feelings among parents varied greatly. Some thought their children’s preschool experience was more than enough preparation for the challenges and structure of five full-days at school. Others were concerned about their little ones being worn down physically, being irritable and over stimulated.

Parents heap praise on school staff for preparing their children for the new experience of full-day kindergarten (FDK). Schools held information meetings and visits to address questions and concerns. “I was comfortable knowing that if my child was overwhelmed at any time, the school would be supportive in helping to ease my concerns or my child’s,” says Rhonda Catt, whose son Jace was about to enter kindergarten at J.W. Inglis Elementary in Lumby. But Rhonda admits she was still terrified.

“Information received ahead of time was adequate but I was still unsure,” says Amber Maltman. Her daughter Tori would be in the same class as Jace.

Concerns lingered—among educators as well as parents. Not all kindergarten teachers agreed with the plan. “Some were advocates of the program and were happy to see it implemented. Others were philosophically opposed and either posted out of kindergarten or faced it with some concern,” says Alice Rees, president of the Central Okanagan (School District 23) Teachers’ Association.

But when it came down to getting the program rolling, teachers pulled together. “Long time kindergarten teachers started meeting monthly to share ideas and support one another. Teachers hired new were sometimes a little overwhelmed and leaned on colleagues for support,” says Alice. “Plans were made to spend the $15,000 the government had provided to equip each new class, but kindergarten is one of the most expensive programs. Attempts by schools and district to cover the shortfall did not always meet the promised allocation leaving some start-up classes short of supplies. Kindergarten teachers often closed some of the gaps buying supplies from their own funds.”

The new kindergarten year started in September 2010 with more than the usual apprehension. But before the end of the month most FDK students, parents and teachers were settled into routines. At Ecole George Pringle Elementary in West Kelowna, Jacob Jeffrey was enjoying his school, his French immersion class and his teacher. “He had attended preschool for two-and-a-half years so he was ready for the full-day program,” says his dad, Scott.

One of Jacob’s classmates, Callie Patton, who attended both Spanish and French preschool was neither anxious nor tired. “We were pleased with how much she had learned and how she developed friendships. The full-day program helped with this social aspect for her,” says her mom, Cat.

“By the end of September I was feeling relieved,” says Tori’s mom. Classmates Tori and Jace were both tired by the end of the week but still happy to be going to school.

Trina Olsen, mother of Grace, another Lumby FDK student, clung to advice from a magazine article on parenting saying it can take a month or more for a child to adjust to full-days of school. “I kept that in mind as the weeks went by and  Grace was unpredictable in her behaviour,” she says. “But I was still worried about her ability to cope with the schedule. The jury was still out.”

Children weren’t the only ones coping with full-day separation anxiety. “It was an adjustment for everyone in the household, not just the child,” says Trina.

It’s a warm day in early May 2010. Students in Madame Rajabally’s French immersion FDK class at Ecole George Pringle are enthusiastically engaged in their lesson. Each holds a piece of chalk. The other hand is covered with a sock. Sitting in table groups of four, all eyes are on the teacher. She calls out a word, en français. Students write the initial consonant on their slate and hold it high. Total active participation. Madame’s quick glance tells her who has the correct answer. She calls out another word. A wipe with the sock and the children race to chalk up the next response.

Callie grins when her teacher acknowledges that everyone in her group has printed the letter correctly. “She couldn’t wait to be in school and had to be convinced she needed to go to kindergarten and not straight into Grade 2 with her brother,” says her mom. “The full-day program has given (the children) a solid foundation and they’ve been exposed to much more French than they would have in the half-day program.”

Madame Rajabally, who has been teaching for 20 years, the last eight in kindergarten, agrees. She says, “Full-day kindergarten is a gift. The curriculum has remained the same, but the amount of time to cover it has doubled.”

She explains that the children have profited from more time to play and explore concepts and skills. “The children’s development in French, a second language, is incredible. I can’t believe how much farther ahead they are than half-day students have been. Their progress is overwhelming.”

Jacob’s parents are also positive about the program. “We’re impressed with the French learning curve during the year. I think more time to teach the curriculum has benefited our son.”

At J.W. Inglis Elementary in Lumby, the children in Mrs. Lueke’s full-day English kindergarten class are enjoying play-based learning time. Grace chats on the pretend cell phone in the kitchen centre, calling friends to organize an imaginary party. Other students gather around her to listen.

“Grace has made tremendous progress this year, academically, socially and behaviourally,” says her mom. “Despite her getting worn down and not being able to catch up (that’s her temperament—not to risk missing anything, so no time to rest), it’s been a fairly successful venture.”

Still, Grace’s mom has some reservations about full-day everyday kindergarten for her daughter. “Last night Grace told me she feels she hardly gets to see me and that there is just too much school.…This is a girl who jumped out of bed to get dressed to go to school just a couple of weeks ago.”

Students gather on the carpet for the daily calendar discussion to consider the date, weather and upcoming school activities, then line up to sing all four verses of Charlotte Diamond’s I Am a Pizza accompanied by appropriate actions.

Tori knows all the words. Her sister was in the half-time class the previous year. “Tori loves school, especially Mrs. Lueke’s,” says her mom. “I’m happy with the program now that I’ve experienced it first hand. Tori has made amazing progress. I found the class atmosphere more relaxed this year. The material covered has been the same as last year for my other daughter, but it felt more thorough with more time.”

Rhonda Catt says her son Jace’s feelings about school change from day to day. “One day he likes it, the next day he kind of doesn’t like it, which might be due in part to the fact that he was only four years old when he entered kindergarten. Birth date can make a huge difference. I felt my son was too young for school for five days but honestly can say it has been a positive experience, and I have changed my opinion 100 per cent from when I originally found out this was happening.”

While the program continues to experience growing pains, benefits continue to mount and are evident in the faces of countless happily engaged students. The same holds true for kindergarten teachers who enjoy extended quality time with no more than 22 students for the full-day instead of two half-day classes making their teaching load as many as 44 students.

“It has been a very successful year. Students became comfortable and then confident with school routines much earlier,” says Theresa Lueke. “Student and family adjustment was not very different from previous years. However, at assessment, report card time and concert time, I found myself less stressed.”

“Full-day Kindergarten truly is the gift of time,” says Mariam Rajabally. “The curriculum taught in a half day can now be spread over the full-day. The children benefited from having more time to play and to explore a particular concept or skill.”

Having siblings together for consistent school routines and on the school bus, as well as reduced daycare costs, have been helpful to many families.