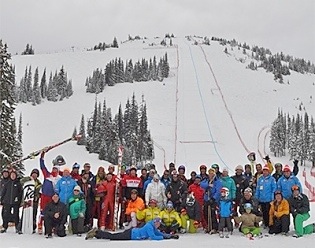 Crowds cheered as the fastest people from 10 countries raced down Sun Peaks’ Headwalls track for the final day of the FIS Speed Ski World Cup.

Italy’s Ivan Origone earned first place in the men’s speed division in the 2nd World Cup event of the weekend, clocking in at 159.93 km/h — narrowly beating out his brother, Simone, who had a speed of 159.92 km/h. Yesterdays winner, Klaus Schrottshammer, finished in 3rd with a speed of 159.40 km/h.

With time to spare, officials gave the go-ahead for the Velocity Challenge run, which shortened the timing area from a 100 metre trap for the World Cup to 25 metres. The Velocity Challenge racers had every opportunity to beat Sun Peaks local Kenny Dale’s course record of 177.21 km/h with a top of the mountain start and enthusiastic crowd to cheer them on. As it were, the record was beat with a speed of 178.22 km/h by the course record holder himself, Kenny Dale.

“I was not expecting that, I had the best run of my life down that track for sure,” says Dale. “I had an awesome wax job from Ian McLaren from McSporties, and my wife, my coach, Lark Frolek Dale, they helped me out so much. I can’t be happier to keep the record at home!”

Dale’s final run was greeted with a roaring crowd of racers, local enthusiasts and intrigued guests.

As the 25th year of the Velocity Challenge comes to an end, racers, event staff and volunteers can relax and enjoy the end of the winter season knowing that the course record was, and can be beat!<