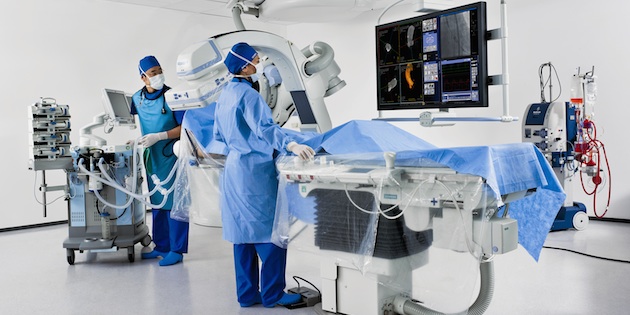 An anonymous donation of $3 million is the largest gift in Kelowna General Hospital (KGH) Foundation’s history.

“This gift is truly transformational and we are very grateful for the community’s belief and trust in our role to support world class health care here in the Okanagan,” says Doug Rankmore, CEO of the KGH Foundation. “And while I wish I could say we achieved our fundraising goal, there is still a ways to go. Equipment needed in the Hybrid OR will not be provided through government funding, but we are confident the community will provide the support to make this significant advancement a reality.”

The $3 million gift places the $12 million Be a Lifesaver Capital Campaign significantly over the halfway mark.

The quest for a Hybrid OR at Kelowna General Hospital  is a result of the newest building on its campus, the Interior Heart & Surgical Centre. Opening in the spring of 2015, it will be the home of 15 state-of-the-art operating rooms, two of which will be purpose-built cardiac  surgical rooms. The largest and most advanced will be the Hybrid OR.

At a cost of $4 million, the Hybrid OR combines traditional surgery with advanced minimally invasive procedures (small incisions under the guidance of sophisticated 3D live diagnostic imaging) allowing vascular and cardiac surgeons to combine traditional and modern surgical procedures once unimaginable.

“Having a Hybrid OR means we will be able to treat very complicated elective, emergency and trauma patients at KGH, saving many lives with world class techniques, right here at home,” says Dr. Pasenau, Head of Vascular Surgery at Kelowna General Hospital. “We have a very busy vascular program, and the Hybrid OR will provide us with an equivalent program when compared to Vancouver and Victoria. That will have a huge impact on patient care within the Interior of BC.”

While cardiac surgery deals with the arteries of the heart, vascular surgery treats arteries throughout the rest of the body. Both the cardiac and vascular programs have teams of four surgeons who provide care for the Interior Health region and its 740,000 patients from Williams Lake to Osoyoos, Merritt to Cranbrook and all the communities in between.

Two of the leading causes of death, heart attack and stroke, can be the direct result of an arterial system that has been slowly and progressively compromised by years of deterioration. In a Hybrid OR, the cardiac and vascular surgical teams can work together, simultaneously repairing life threatening problems when every second counts.