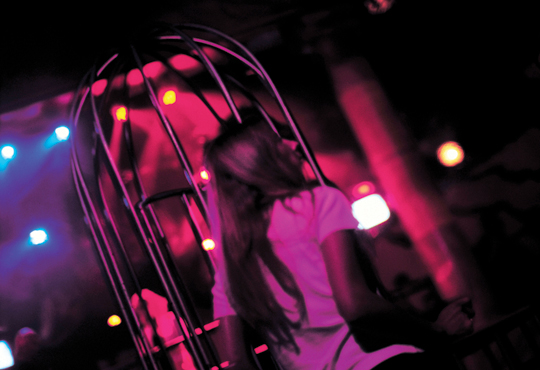 In the mid-1990s, the media began to report what appeared to be a growing trend: drug facilitated sexual assault, and in 1997 a young woman named AJ Januszczak put a human face on the story. Going public in the newspapers and on a national television talk show, she described exactly how a man drugged her while she was playing pool with her sister and her friends, then took her out to the parking lot where he and one of his friends raped her.

As stories like Januszczak’s continued to surface, women across North America adapted their behaviour. Watch the bartender make your drink. Cover your drink. Watch each others’ backs. Parents added new directives to the list of cautions we gave our teens. Never accept a drink that’s already been opened. Keep your thumb in the neck of the bottle. Over the past decade, it all became routine. Then, last fall, reports of the drugging and sexual assault of a teen at a Pitt Meadows rave brought it back into the spotlight.

What happened in Pitt Meadows was an eye-opener for parents in the Okanagan, according to Jane Smith (not her real name). “I think before that, there was a bit of denial,” says Jane, who works with youth. Previously, parents believed that drug facilitated sexual assault was something that happened in faraway places, in downtown Vancouver and other big cities. “It has happened in Penticton,” she says. “It has happened in Kelowna.” Local victims assistance agencies and the RCMP report that it happens in nightclubs and in homes, at parties and in everyday situations. It happens to women and girls, and to boys and men.

The reports from Pitt Meadows highlighted one of the most disturbing elements of drug facilitated sexual assault: The assailants—and, in some cases, the onlookers—are incredibly casual about what they’re doing. In every case the victim is a person, someone’s sister, mother, brother; yet somehow, this person is being treated as “just a score.” Even more disturbing, while Januszczak was the random target of a pair of serial predators, the rape of a victim incapacitated by drugs more often involves one of the victim’s acquaintances. Hence the term “date rape drug,” which generally refers to ketamine, Rohypnol, and gamma-hydroxybutyrate (GHB).

All three drugs are capable of incapacitating a person, affect memory, and are capable of causing death when mixed with other drugs or alcohol—and when used alone. Each goes by a long list of street names. Ketamine, for example, is referred to as special K, vitamin K, kit kat, cat valium, jet, ket, super acid and more. A controlled drug, ketamine is available legally in Canada for use as an anaesthetic, primarily by veterinarians.

GHB has been used by body builders (based on claims it burned fat and built muscle), and is used recreationally as a “club drug” for its euphoric high. It is manufactured illegally from chemicals intended for completely different purposes, so there is no control over the ingredients used. Sergeant Rick Dellebuur says the Penticton RCMP see an increase in activity involving this type of drug on long weekends and during vacation season when GHB appears to be brought into the area, most likely from the Lower Mainland.

Rohypnol, intended primarily for the short-term treatment of insomnia, is manufactured in other countries. Commonly referred to as “roofies,” these pills are no longer legally available in Canada or the United States. In the popular movie The Hangover, one character uses roofies to spike drinks at a Las Vegas stag party. When the men wake up with no recollection of anything that happened, their confusion is played for laughs.

In reality, the effects of spiking are serious. “If you take a drug unknowingly, it’s extremely confusing for your body,” says Lisa Needoba, agency coordinator of the South Okanagan Victim Assistance Society (SOVAS). “Your nervous system doesn’t know what’s going on…the next day it can’t make sense of what happened.” People who have been drugged aren’t always able to find out what took place and this sense of “not knowing” can be devastating. Confusion and memory loss may last for several hours, a few days or permanently.

Sgt. Dellebuur points out that agencies working with victims have long known only a small percentage of sexual assaults is ever reported. Where these drugs have been used to facilitate rape, by the time victims piece together what happened they may decide they don’t have enough information or that it’s too late to report. So while only a few drug facilitated sexual assaults are officially reported in Penticton each year, he says, “I’m not so naive as to think it’s not happening.”

Aimee Thompson, executive director of the Elizabeth Fry Society in Kelowna, says although she’s noted an increase in reporting over the past eight years, the vast majority still go unreported. One reason is that these cases have been difficult to prove. Because these drugs are metabolized within hours, by the time a sample is collected it’s often too late and the toxicology reports are inconclusive. This might change soon, she says. Technology now exists to analyse hair samples a few weeks after the assault, pinpointing any incidence of GHB, Rohypnol, ecstasy—or excess alcohol.

In fact, despite the current media attention directed toward the newer date rape drugs, this type of sexual assault is still far more likely to involve plying the intended victim with alcohol, an age-old tactic well documented in popular culture. Back in the 1950s, Lou Gottlieb of The Limelighters entertained audiences with the song Have Some Madeira, My Dear? in which he portrayed a vile old man using alcohol to overcome the inhibitions of an innocent teenage girl. When the young woman suddenly recalls her mother’s cryptic deathbed advice about the perils of alcohol she decides to leave, then wakes up to discover she’s in bed with the old man, the audience groans and laughs. The message in this cautionary tale of seduction: she shouldn’t have been drinking.

We do all need to take responsibility for the situations we put ourselves into, and yes, it’s generally easier to make good decisions about potential risk while we’re sober—easier still when the warning is spelled out plainly. But the problem with this message is that it misses the bigger point: he shouldn’t have set out to rape.

Much of the information about date rape drugs is focused on what you can do to minimize the risk of becoming a victim: Plan ahead. Cover your drink. Stay with friends you trust and watch each others’ backs. Be vigilant. This overshadows the more important messages, those that should be aimed at stopping people from becoming perpetrators in the first place: It is wrong to take advantage of someone else’s youth and inexperience. It is wrong to drug people. It is wrong to take advantage of anyone who is inebriated.

Because the focus remains clearly on what the victim should do differently, it’s not surprising people who have been assaulted may initially take the same view, adding yet another burden to an already heavy load. “The person is already hurting emotionally, and often physically,” says Dr. Toupey Luft, a registered psychologist. Self blame is a common first response among rape victims, even the “stranger jumps out of the bushes” scenarios. When the sexual assault occurs while the victim was out to have a good time—especially where voluntary use of alcohol or recreational drugs is added to the mix—the sense of being somehow at fault is that much more acute.

Sexual assault under any circumstances can be soul destroying. “It affects your sense of self, it affects your sense of your sexuality,” says Dr. Luft, “and I think those two are tightly intertwined.” It also affects the victim’s sense of trust. Because drug facilitated sexual assaults most often involve an acquaintance or a date, this extends beyond losing the ability to trust in personal relationships to feeling uncomfortable in ordinary situations, like unwinding over a drink with a friend. Victims may be leery about going out, even in a group. When they do go out, instead of relaxing they may be hyper-vigilant about protecting themselves and those they are with. “If that’s the environment where you’ve experienced this traumatic event,” says Dr. Luft, “that’s very likely going to have a whole different meaning for you.”

But in a civilized society, everyone should be able to go out and enjoy social situations. When we’ve had too many, whether of our own volition or because we’re being targeted, no one has the right to take advantage. “You can’t give consent when you’re intoxicated,” says Lisa. “I think that’s something that people often choose to ignore.”

She says people who think they may be witnessing an attempted targeting may be able to intervene. Just speaking to the victim—asking a suddenly intoxicated woman if she is OK, for example—may scare off a would-be attacker and prevent a drugging from becoming a rape. In public establishments, bystanders and friends shouldn’t rely on reporting suspicions to staff as there have been cases where bartenders or bouncers have been involved; in these places it’s best to call the police.

Constable Laura Pettigrew says anyone who realizes they may have been sexually assaulted should go to the hospital immediately, where a health-care professional trained to help rape victims will provide assistance. The hospital will also be able to collect any evidence that might be useful. If the victim decides to report to the police, toxicology reports and samples of DNA can help in the investigation and prosecution. Victims who decide to pursue legal action can count on help from agencies like the Elizabeth Fry Society and SOVAS.

Lisa says a few years ago, her organization provided support and assistance to a woman who was successful in having her attacker convicted. And no matter how much time has passed, anyone who is dealing with the aftermath of sexual assault can seek help dealing with the trauma.

Perpetrators count on their victims remaining silent. In all likelihood, Januszczak’s decision to go public with her story made it much more difficult for other would-be rapists to use drugs to incapacitate their victims. Recently, Danielle Chetner  (Miss Penticton 2010), and Camelia Vokey (Princess) acquired a grant to raise awareness among their peers. “We’re going to target house parties,” says Danielle, since that’s where teens are most likely to encounter the drugs, and they also want teens to know the drugs can be slipped into water bottles. “It can happen to girls and boys as well,” she says, “and we just want people to know.” –Dawn Renaud

• Only go to parties and clubs with a trusted friend and watch out for each other.

• Always get your own drink, only accept drinks in containers that you open yourself and never leave your drink unattended.

If you suspect you’ve been drugged, get someone you trust to immediately help you seek medical attention. Symptoms of drugging include:

If you think you may have been sexually assaulted while intoxicated, go immediately to the nearest hospital’s emergency entrance for assistance. Do not shower. If you must urinate, collect a sample. Bring soiled or torn clothing.