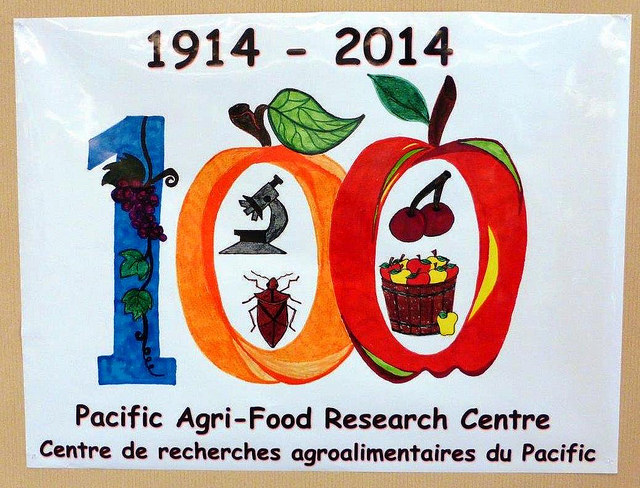 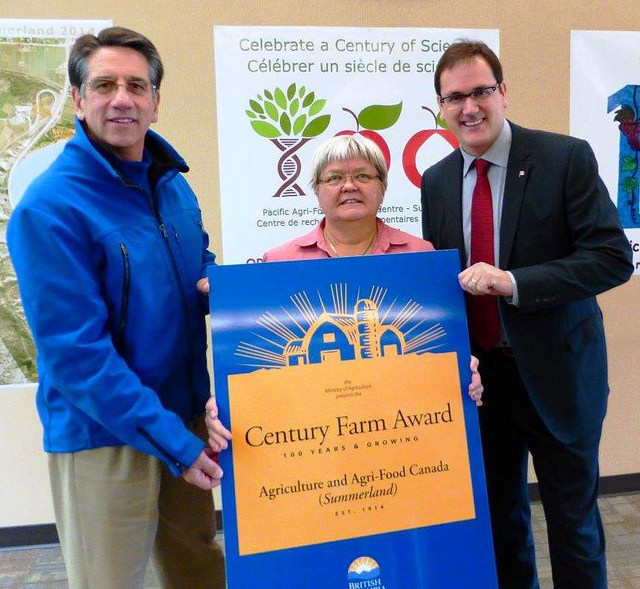 The B.C. government is recognizing Agriculture and Agri-Food Canada’s Pacific Agri-Food Research Centre in Summerland for 100 years of providing important research for the sector with a Century Farm Award. Penticton MLA Dan Ashton presented the award to MP Dan Albas and the staff of the Summerland facility today thanking them for their contribution to the British Columbia agriculture industry and its history.

“Staff at the Pacific Agri-Food Research Centre, present and past, should be proud of the work they’ve accomplished over the last 100 years," says Albas, Member of Parliament for Okanagan-Coquihalla. "Some of the most vibrant sectors in British Columbia, including tree fruits and wine, would not be what they are today without the incredible advancements made by scientists in Summerland.”

“Century Farm Awards are a great opportunity for us to recognize agriculture organizations that have made a long-term contribution to our proud British Columbia agriculture sector," says Ashton.  "Congratulations to all of the dedicated workers at the Summerland facility in reaching this milestone, your efforts are appreciated both in your local community and throughout British Columbia.”

The Government of Canada established the Dominion Experimental Farm in Summerland in 1914 to support British Columbia’s fledgling agriculture industry. The farm was renamed the Summerland Research Station in 1959 to reflect the amalgamation of the farm with the plant pathology and entomology laboratories. The facility continued its research in the area of crops, as well as poultry, swine, and cattle farming.

In the 1980s, the research scope narrowed to focus on the primary challenges in tree fruit, grape production and food processing. The facility was renamed the Pacific Agri-Food Research Centre in 1996.

Today, the proud tradition of quality research continues at the 320 hectare site. The centre’s research programs aim to generate knowledge and technologies to promote the sustainable and economically viable production of wholesome foods and novel bioproducts from high-value horticultural crops for local, national and international producers and markets. The Summerland facility is also the home to the Canadian Plant Virus Collection consisting of freeze-dried and live viruses maintained in perennial plants.

Century Farm Awards honour agricultural organizations that have been active for 100 years. The Century Farm award program was created in 1994 to mark the centennial of the Ministry of Agriculture.