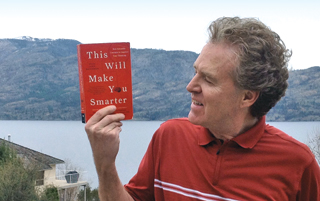 A monstrous amount of scientific evidence is showing that the human brain is most active when listening to or playing music. So it seems fitting that this column appears in the music issue of Okanagan Life because from my musical perspective, Fiery Cushman has written one of the best articles I have ever read.

Titled Confabulation, it appears in the book This Will Make You Smarter, produced by Edge.org. I relate to Edge because I find its motto as exciting as it is compelling.

Edge motto: To arrive at the edge of the world’s knowledge, seek out the most complex and sophisticated minds, put them in a room together, and have them ask each other the questions they are asking themselves.

Present world motto: To lay on the couch of mundane conformity, seek out the most ordinary minds, elect them to office, and have them pander to the richest one-tenth of one per cent.

Of course, I bought their book This Will Make You Smarter right away and pursued Chushman’s article. Recently he explained confabulation to me in a telephone interview: “Confabulation is closely related to the phenomenon of self-deception. In a way, you could view them as two sides of the same coin. The typical case of confabulation is where you are engaging in a behaviour and you explain it with incorrect information. The typical case of self-deception would be where there is a piece of information that would be relevant to your behaviour, which you are deliberately ignoring.”

Cushman’s research relates closely to the reading I have been doing on split-brain patients, and the important research of Dr. Michael Gazzaniga and Dr. Roger Sperry. Among others, they provided the shoulders on which Cushman stood as he penned the article that suggests “we are shockingly ignorant of the causes of our own behavior.”

Gazzaniga’s research has revealed that the left frontal cortex of the human brain thinks it is all-knowing and eminently wise. Dubbed the “Interpreter,” Gazzaniga maintains this region of the brain will always try to make sense of the world for you, even when it doesn’t have the right information. It makes stuff up!

After reading Confabulation for the seventh time, I enticed Cushman into an email dialogue with a friend and fellow city and regional magazine publisher, John Palumbo of Rhode Island Monthly.

Armed with new insight, John asked our publishers group the question I wish I had. “If none of us are making money after 10 years in the social media arena, why are we still engaging in it?”

Grasping Cushman’s theory, I will phrase the question more pointedly: “If some 70 city publishers across North America have diligently followed the hype of the multi-billion-dollar corporations and social media gurus to embrace social media, why do we only have beautiful losses and a few ‘likes’ to show for it?” Isn’t this confabulation? Why are we compelled to “follow” over-hyped Internet monopolies at the expense of our communities?

A monstrous amount of scientific evidence shows that we all confabulate and we are shockingly ignorant of it—?until now. Not understanding confabulation has had us doing the same thing over and over again, but expecting different results. Understanding that our know-it-all Interpreter will fabricate stories should help us think and act with more purpose.

Listen to some music, read Cushman’s article at Edge.org, ask your Interpreter to stop bullying your brain and imagine a new beginning standing on the shoulders of giants.