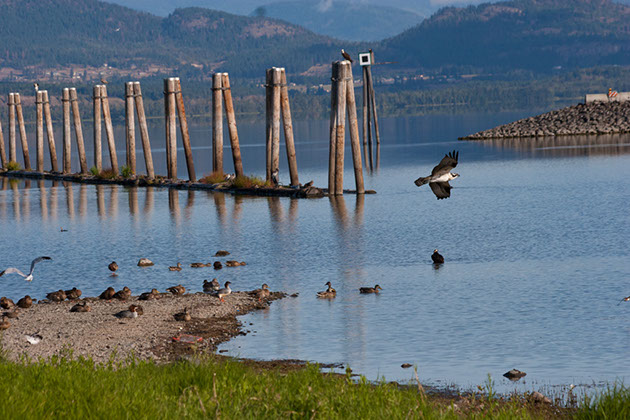 The sliding door to our hotel balcony framed Salmon Arm Bay: fluorescent green wetlands, silver-blue Shuswap Lake, a rolling horizon defined by the Fly Hills, and not 50 metres away, two ospreys sitting on a pick-up-sticks nest strewn across a platform atop a tall pole.

A precocious teen chick, as big as its parents, made loud demands for food while Mom tore bits of fish with her beak and dropped them into its mouth. Dad did a close flyby before landing high in a tree near the Salmon Arm pier off to our right. Ee-eep, ee-eep?—?their calls and answers flew back and forth above the marsh; apparently we were eavesdropping on a very important family conversation. 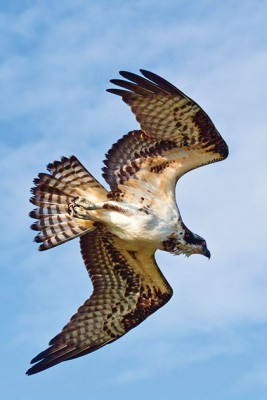 Directly below us, people strolled past on the boardwalk and we noticed others clustered on a patio with a view; birdwatching over a local ale and some appies seemed appealing. The hotel pub provided front row seats for the action on the boardwalk and in the nest, and the show came complete with colour commentary from an opinionated crow who alternated perches between the iron railing in front and the roof peak above. As the light turned mellow the ospreys vacated the nest, although there were still herons to watch as they glided in for their long-legged landings and nestled down for the night.

Back on our balcony early the next morning, the view was about the same, nobody at home in the nest, while five herons waded through the shallows like mini-dinosaurs. But by the time I brewed coffee the young osprey was back, loudly ordering breakfast. 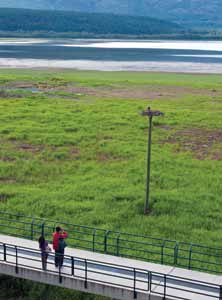 Eventually we worked up the energy to abandon our own comfy nest for a visit to the Brighouse Nature Centre in Marine Park. We’d heard it offered a terrific video of the famous mating dance of the western grebe, performed every spring right there in the bay. When we arrived, though, we found the door locked and a note taped to the window with the information that “Mike” was on the pier.

Mike was easy to identify, what with the tripod-mounted spotting scope and all. We connected and latched onto what he was watching?— a pair of ospreys perched on a green navigation marker. Suddenly a shape unfolded; the great wingspan spread, then streamlined as the hunter torpedoed into the water, rising with a silver-sided fish clutched in a death grip. The osprey lit on a post below the square sign, safely removed from the other bird that continued to watch from above. A third swooped in and perched next to the watcher.

At first I thought these two were simply jealous, waiting to grab scraps or even drive off their successful rival, until it dawned on me that the tone of their calls could be more encouraging than taunting. When I suggested this to Mike, he confirmed that the lucky bird with the fish was this year’s fledgling; Mom and Dad were conducting classes and Junior had just learned how to catch his own breakfast.

When I finally looked beyond the drama on the marker, it occurred to me that there was an incredible variety of birdlife all around us?—?and so close. A huge heron stood across the channel; ducks and geese poked in the shallows; and a bald eagle perched on a nearby post.

We caught up with Mike at the nature centre and checked out the specimens, videos, books, charts and photos, leaving with a map of the nature trail that rims the bay, and a new plan for what to do with our afternoon. 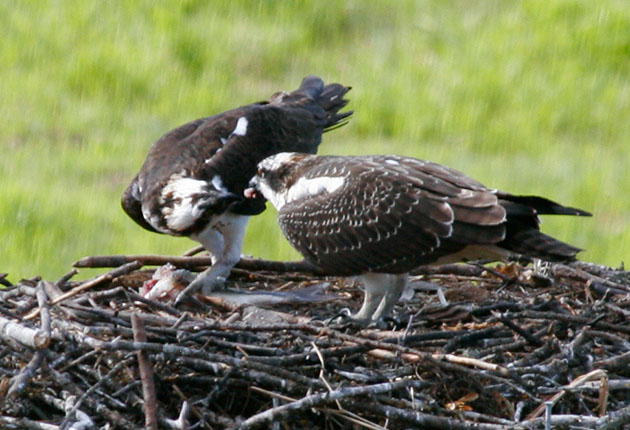