A Good End: a look at doctor-assisted death 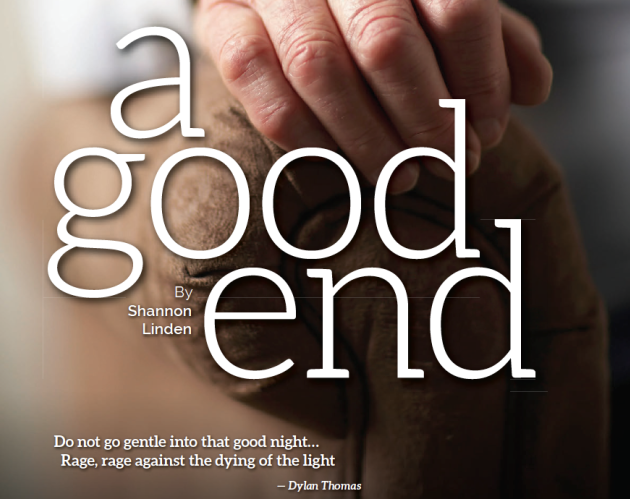 As the June 6 deadline approaches for the federal government to impose doctor-assisted death legislation, we revisit one of our stories looking at both sides of the right-to-die debate within the Okanagan.

As poet Dylan Thomas urged, we do not go gently, we fight with our last dying breath to hold onto the inexplicably beautiful gift of life. Yet dying is our destiny. Just as life is lived in a profoundly personal way for each of us, death is unique for everyone—a sentiment at the heart of the hotly debated topic of assisted dying. I began researching the “right to die” a year ago, and the deeper I delved, the more intricate the issue became. In a country where our democratic rights allow us to choose how we will live, should we have a say in how we will die?

On February 6, 2015, our Supreme Court said, yes. In the charter precedent case of Carter vs. Canada, nine justices unanimously struck down the ban on doctor-assisted dying. The landmark ruling resulted in cries of celebration—and tears of rage—depending upon which side of the fundamental human law people stand.

A Bit of Background

Until the recent Supreme Court ruling, assisted suicide and euthanasia were illegal under Canada’s Criminal Code. With the new judgment, Parliament has a year to draft legislation giving competent and consenting adults enduring intolerable physical and mental suffering, the right to seek medical help to end their lives.

Concerns the Conservative government would invoke the notwithstanding clause to override the ruling have abated, but Prime Minister Stephen Harper has suggested the matter is “a very delicate and divisive issue” requiring input from Canadians of all backgrounds. An election year makes the issue all the more sensitive, but precedent was set in Quebec last spring.

On June 5, 2014, that province’s Liberal government, led by neurosurgeon Philippe Couillard, passed legislation allowing terminally ill people to seek physician assistance to end their own lives with lethal injection. Bill 52 won with an overwhelming majority—close to 80 per cent—but only after a long, complicated, drawn out debate.

The province came up with a comprehensive law that states patients with an incurable disease; in an irreversible, advanced state of decline in capacities; in constant and unbearable pain (physical and psychological); can opt to end their suffering. Supervised by a physician, patients sign dated consent forms, allowing for change of heart, at any time. Quebec made the issue a medical matter (under provincial jurisdiction) rather than a criminal one (solely under the federal purview).

Despite the previous efforts of Conservative MP, Stephen Fletcher, who put forth a private member’s bill in favour of assisted death in the spring of 2014, the federal government steered clear of the topic, leaving it to linger for 20 years, in the hands of the Supreme Court.

Back in 1993 Sue Rodriguez lost her plea for the right to physician-assisted suicide when the Supreme Court of Canada, in a 5-4 decision, said the criminal code did not violate her charter rights.

Rodriguez, who long suffered the devastatingly debilitating amyotrophic lateral sclerosis, or ALS, was unable to walk or talk, but found a way to take action. With the assistance of an anonymous physician, she ended her own life.

Some 18 years later, Kelowna’s own Gloria Taylor, similarly suffering from ALS, became a profile plaintiff, when in 2012 the BC Supreme Court declared the existing law banning assisted suicide was in fact unconstitutional.

Justice Lynn Smith delayed ruling, but granted Taylor an exemption that opened the door for her to decide how and when she would die. It was a victory Taylor never exercised. She passed away from an infection in the fall of that year, but not before she touched the hearts of a nation still in need of answers.

The BC Civil Liberties Association (BCCLA) continued Taylor’s cause, and that of Kay Carter, another BC woman who sought the province’s help to end her suffering. Carter eventually travelled to Switzerland for legal euthanasia. In Carter vs. Canada, the BCCLA argued those with degenerative diseases have no physical means to end their lives and such persons may end their lives sooner than desired, before being unable to act for themselves. Denying them the right to assisted suicide thus contravenes the Charter of Rights and Freedoms.

With the Supreme Court in agreement, Canadians ponder what this present turn in history will mean for the future of our health care.

Importantly, people are talking about the palliative process and that, according to experts, may be the best way to ensure what all sides seem to agree upon: alleviating pain, bringing peace and comfort, and maintaining dignity for the dying, is in everyone’s best interest.

Dr. Gail Plecash, one of the first female physicians with a full time practice in Kelowna, believes there is no greater privilege than being present at the coming—and going—of life. Since 1977 she has delivered 1,000 babies and shared in hundreds of patient deaths. “The privilege of working with people who are going through end of life issues is wrought with rich emotions, but we sterilize it,” she says. “Like birth, we want to throw down clean towels and mop it up. We hospitalize it and put it away so we don’t have to look at it. When in fact, it’s one of the most wonderful parts of medicine and a beautiful time in life.”

Tears collect in her eyes when she recalls particular patients and one of her best friends, who died with dignity, surrounded by her daughters and husband. Loved ones made sure Dr. Plecash’s friend was dressed in a beautiful nightie, not a hospital gown; her daughters rubbed her arms and legs with scented lotion while candles flickered softly in her bedroom.

"The privilege of working with people who are going through end of life issues is wrought with rich emotions...  it’s one of the most wonderful parts of medicine and a beautiful time in life.” - Dr. Gail Plecash

Indeed, physician responsibility is key. A recent study by Stanford University School of Medicine found a disconnect between what doctors want for themselves and what they do for their patients.

Of 1,000 doctors surveyed, 88 per cent said they would chose a do-not-resuscitate order for themselves if they were terminally ill, yet they pursue aggressive, expensive, life-prolonging treatment for such patients.

Lead author, Dr. V.J. Periyakoil, says there is a tipping point at which treatment becomes more of a burden than the disease itself, but doctors are trained (and rewarded) for doing more, not for talking truths. Such emotionally charged discussions are difficult for doctors and take significant amounts of non-billable time. Physicians fear failing their patients and cite a sense of abandonment, making it easier to prescribe one more line of chemotherapy, than have the conversation about why not to.

I Just Want to Go to Sleep

Palliative care nurse, Tracy McConnell, understands the dying process. “What people really want is ownership and control of their situation,” McConnell says. “Patients want to decide for themselves how much they will endure. Sometimes people look at me with so much pain in their eyes, pleading, ‘I just want to go to sleep.’?” It’s an anguishing experience with a seemingly simple answer yet McConnell says there’s much more to it. Eleven years of experience have taught her something significant: people die as they live.

The organized have their affairs in order. They’ve done all the work with finances and family. Sometimes they even predict the day of their own deaths. Others, particularly those harboring regret or resentment, with unresolved issues and broken bonds with loved ones, suffer more.

“There is so much emotional and spiritual pain,” she explains. “There is restlessness. If people haven’t received the right support, it’s not a good journey for them.”

On the other hand, if advanced care planning that is goal oriented is in place; if palliative sedation therapy is employed; if reconciliation with loved ones occurs, a peaceful and dignified end is likely. Ultimately McConnell feels (and Dr. Plecash concurs) if people receive this kind of palliative care, most would not end their lives prematurely—but that doesn’t mean she feels they shouldn’t have the choice. Perhaps toughest of all, is the terrifying loss of control and independence for those like Gloria Taylor, suffering with ALS.

“When someone with ALS comes into hospice for a week of respite for their caregivers, it rocks the staff,” McConnell says. “The patients are anxious, looking for us to do the right thing for their positioning and comfort. Their care must be so precise. If their leg is a hair out of place it is uncomfortable for them, but many cannot articulate it. I have to ask them to blink once for yes, twice for no.”

In these cases McConnell admits, “If I was experiencing the pain and suffering I’ve born witness to, I would want the choice of ending my life.” Which is not to say she’d exercise it, but having the option means having control, and sometimes that’s all people need.