Return of the Okanagan Sockeye 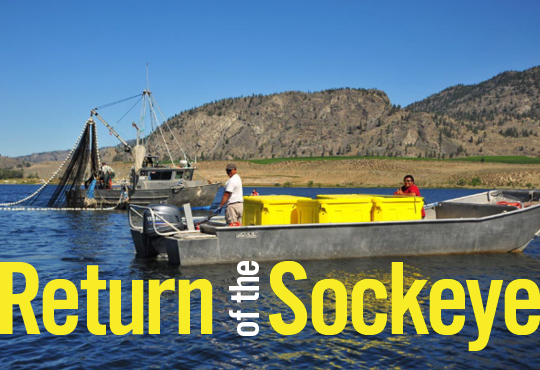 A crew of four well-muscled men work steadily, arm over arm, pulling up the nets pinched between a 38-foot purse seiner and a low-sided packing boat. One of the fishermen plucks a rogue carp from the net and tosses it back into Osoyoos Lake. As the bottom of the net gets closer to the surface, the water boils and a tangle of shiny, green-grey fish with a hint of red blush along their sides emerges in the narrowing gap between the boats.

It’s a very small haul—30 sockeye salmon or so—but still a chorus of cheers erupts from the boats as the fish are shuttled from the net into huge plastic holding pens filled with ice. Other catches have been much more bountiful, with hundreds of fish, and other days have yielded thousands. But each net wriggling with sockeye is a triumph. When the population returning to the Okanagan lakes chain reached a critical low in the mid-1990s, no one was sure that the Okanagan sockeye run could be brought back. Yet the fish have finally, miraculously, returned to Osoyoos Lake, in quantities that have exceeded even the most optimistic projections. Enough that throughout August 2011 and 2012, it was possible to operate what Fisheries and Oceans Canada calls a “demonstration fishery” (a trial commercial opportunity for First Nations in upstream locations or near the end of the salmon stock’s spawning migration, to explore whether economically viable fisheries can take place in areas that have not previously been commercially harvested).

“We’re still trying to break the record of 5,800 fish in one day,” says John Hall, back on shore under the tarp-covered shed functioning as a makeshift fishing camp and field office for the Okanagan Nation Alliance (ONA). John, a hunter and a fisherman, is a member of the Osoyoos Indian Band. He has a wide smile that takes over his entire face, the creases around his eyes trenched through five decades of laughter and squinting against the Okanagan sun. He remembers as a teenager fishing with uncles and cousins in the Okanagan Valley for Chinook, brook trout and even sockeye. The sockeye in those days, he says, were twice as big as the three-to-six-pounders they catch today. But he’s just happy the fish are returning.

The words stick in his throat when John recounts how the sockeye stopped running in numbers large enough to continue the annual fishing tradition. “There’s a whole generation that didn’t have a chance to fish,” he says as his eyes well up suddenly in the heaviness of this loss.

ONA fisheries biologist Richard Bussanich is nearby at his “desk”—a portable Rubbermaid table that functions as his field office at the fishing camp. While the return of the salmon is the result of a combination of science and improved environmental stewardship, Richard credits the steadfast reminders of many First Nations’ communities that something had to be done about the vanishing sockeye in the Okanagan lakes. Sockeye is an important traditional food source and part of the cultural life of the Sylix-speaking communities of the Okanagan Nation Alliance on both sides of the border. “There was an Okanagan elder, Albert Saddleman, who would show up at high-level government meetings as early as the 1970s,” says Richard. “And he’d just ask simple questions like ‘When will we bring the fish back?’”

While the crisis hit a critical point in the mid-1990s, the decline of sockeye stocks in the Okanagan was a problem that had been decades in the making. Nine dams had been built in the Columbia River over the last century, seriously impacting the number of Okanagan smolts (the pre-adult stage of salmon as they lose their camouflage dark vertical bars in preparation for ocean survival) that survive the 1,000-kilometer journey south to the Pacific Ocean. Hundred of thousands, if not millions of fish go out, says Richard, but the majority get chewed up in the turbines in the Columbia River hydro-electric projects. Those that do make it to the Pacific will feed 100 to 200 kilometres off shore. Any that make it beyond that to international waters risk being caught by unregulated ocean fishing operations. After three to four years at sea, spawning instinct drives the monumental migration back to the Okanagan, a trip even more perilous and challenging than the seaward swim.

By 1995, there were only an estimated 5,000 Okanagan sockeye. “And 2,500 of them were female,” says Richard, pointing out the precariously small gene pool from which any future stocks could be rebuilt. But it was one of the few remaining sockeye runs in the entire system. “The Okanagan is the only natural area left in the Columbia,” he says. “And there’s a natural section near Oliver—the only natural section left in the Okanagan chain.” The idea was that perhaps it was enough to rebuild the sockeye stocks.

Between 1998 and 2003, Richard says, “plans to create the plan to plan” were envisioned. It required trans-border coordination to create fish ladders at dam sites, hatchery programs, monitoring stations, studies to see how the sockeye would interact with kokanee (the landlocked salmon who remain in the fresh water of the lakes for their entire life cycle) and extensive habitat restoration. The ONA, with its seven member communities on the Canadian side of the border and the Colville Federated Tribes to the south, spearheaded the project and coordinated with government agencies in the US and Canada through its ONA Fisheries Department.

The 2003-pilot project for the Reintroduction of Sockeye Monitoring Program in Skaha Lake was successful enough to launch the 12-year Sockeye Reintroduction Plan in 2004. By 2005, an important multi-year agreement with the Chelan County Public Utility District was struck to improve fish travel and monitoring along the Columbia River in the US. The long multi-pronged process of habitat restoration, a hatchery program in Skaha Lake, improvements to fish passages along the route, and a general stewardship component required coordinated efforts on both sides of the border to re-naturalize the migration route as much as possible.

Perhaps quicker than anyone had thought possible, the sockeye have made it back in heartening numbers. In 2010, an astonishing 297,000 sockeye returned to Osoyoos Lake—three times the number forecast. Recreational fishing for sockeye was opened for a several weeks that summer. Licensed anglers were allowed two sockeye per day.

In 2011, the stocks were plentiful again. Recreational fishing licenses were issued. The ONA started a small demonstration fishery to take sockeye from Osoyoos Lake, distributing fish into ONA communities as well as selling commercially to restaurants in the Valley. Chefs like Stuart Klassen at the Delta Grand Okanagan and Rod Butters of RauDZ Regional Table were thrilled to have a fresh, local source of sockeye for their wine country menus.

In 2012, the number of returning sockeye was high again. As Richard flips through his notes, he reports that 325,000 sockeye were counted making it through the fish ladders at Wells Dam, 150 kilometres south of Osoyoos. But the August heat pushed up the temperature in Osoyoos, killing over 48,000 sockeye in the south and central part of the lake.

Though this still left 184,000 sockeye in the north part of the lake, more than enough to open the demonstration and recreational fishing and provide breeding stock, the die-off drove home the point that the sockeye runs eventually need to extend north, ideally returning back into the colder waters of Skaha and Okanagan lakes. Yet there is finally a sense of cautious optimism about the long-term sustainability of this traditional Okanagan food stock.

And as the sun sparkles off Osoyoos Lake, a dozen recreational fishermen are enjoying a lazy mid-day session on the water. The ONA runs a research boat where Casmir “Cash” Tonasket and his assistant Andrew “Oly” Clarke  do a “rod count” and a catch count at the top of each hour. The purse seiner is back out for another haul, one of the last of the season, and only if the fish cooperate.

“As of today, we’ve harvested 59,000 fish in 2012. We’re now saying, ‘Stop,’” says John on the second last day of fishing (September 1). Conditions have been ideal in the past few years and have bolstered stocks, but the ONA is not ready to jeopardize what is still a tenuous future for Okanagan sockeye. Instead, the plan is that for many years to come, Okanagan sockeye will just be available as a seasonal product on our tables, appreciated not only for its taste but also for its miraculous return.

Stuart Klassen, executive chef at the Delta Grand Okanagan Resort and president of the Okanagan Chefs Association, is a huge supporter of this local, sustainable, high quality fish, and the ONA initiative to bring local sockeye back. Klassen bathes the salmon fillet in a rice wine and butter sauce and perches it on a bed of eggplant, bok choy and braised lentils, with a local farm vegetable in a soy-mirin sauce. He’s also a fan of putting sockeye salmon “bacon” on his special event menus. 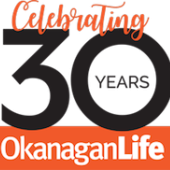