Bizarre and beautiful stories from the Myra Canyon

The first 60 seconds are always the same. It begins with a group of tourists. Smiling and waving at me from the first trestle, they display the recreational camaraderie shared by all visitors to the Myra Canyon. It comes from the common journey they’ve made—a 900-metre climb from the crowded beaches below. So they smile, they wave. And I wait. Soon enough their eyes begin to search me: a fluorescent safety vest, a bear-banger on my shoulder strap, a pack stuffed with medical and tool kits. I’m not your average tourist, leaning against the information kiosk and decked out like a boy scout. The visitors look puzzled. Finally, they make out the words printed across the front of my bicycle: Trail Host. Ah. The inevitable question follows: “So what does a Trail Host do?”

Nearly every visitor asks, and after two summers in the bush I still haven’t come up with a good answer. So, I cite the job listing on Castanet: “the duties of the Trail Host are primarily to … interact with tourists … supply historical and geographical information … deal with accidents requiring minor first aid … traverse the canyon.”  Simple enough. But that’s not the whole story.

Before I became a trail host, the majority of my interaction with tourists took place on Lakeshore Road—stuck behind them in traffic. Up in the mountains, however, it’s more involved. I welcome them, ask where they’re from, offer to take photos and even pose for some. My goal is to help them enjoy the trestles. But in the odd instance, I accidentally do just the opposite. 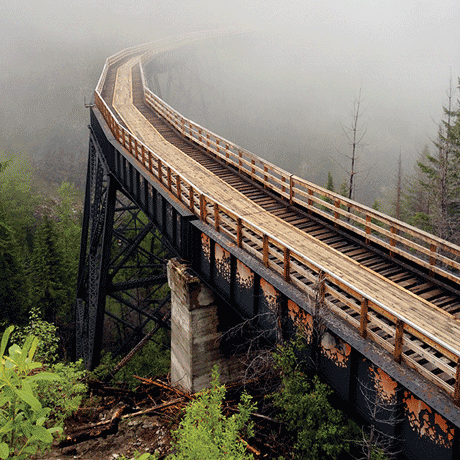 It’s May, and the chilly rain has ensures a quiet weekend at the trestles. Deep in the cloud layer, the moisture hangs in the air and dampens the rail bed. As I cycle from Myra to Ruth station, I become increasingly aware of my own silence. The tires of my bicycle slip effortlessly over the wet dirt, but visibility is limited to 100 metres. The last thing I want to do is surprise a wild animal. Thumbing my bear-banger, I begin to feel nervous. Eventually I decide it would be a good idea to make up for the usual crunch of tires and chatter of tourists by randomly yelling “whoa bear” —a common practice among bushmen.

Unfortunately, my pronunciation grows lazy, and what was once an audibly human call becomes an animalistic grunt. Shortly before entering Anderson’s tunnel, feeling very alone, I let out a mighty “WOOBRAH” to let the bears know I’m coming. To my surprise, this is met with a shrill shriek from inside the tunnel. I ride out the other side just in time to see three Japanese tourists escaping down the mountainside. I apologize profusely, explaining that I’m not a wild animal; they still look uneasy.

Cheeks flaming, I ride on.

By Ryan Kluftinger. Photos by Charlotte Thomas.
As seen in August 2013 Okanagan Life.