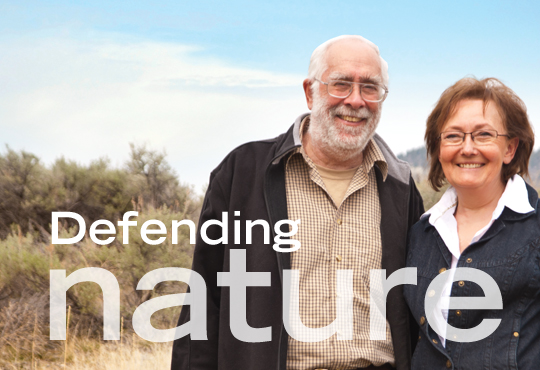 Renowned ecologists, authors and activists, John and Mary Theberge have spent a lifetime studying nature, working to increase understanding and seeking to protect endangered environments through the national park system...

Before you start talking to them, John and Mary Theberge look like another pair of comfy grandparents from the south end of the Valley. But beneath that thin veneer of age lies the chain mail of their just cause—nature.

John and Mary are ecologists living a crusading life that would be the envy of most Knights Templar. They travel the backcountry of the world studying wildlife, then return home to the Okanagan to write books about their discoveries. Their third and latest book, The Ptarmigan’s Dilemma is a study of the complex interactions of the environment, evolution, selection and time on the very process of developing life on Earth.

It wouldn’t be accurate to call the couple retirees. Better to refer to them as having made the transition from their past day jobs to their new day jobs. Mary was educated as a teacher and works as an illustrator and researcher alongside John. He was a professor of ecology in the faculty of environmental studies at the University of Waterloo in Ontario from 1972 until 2000. Now he consults in the field. Today John and Mary give lectures, write and do field research, without the cumbersome necessity of dealing with a teaching load.

No matter how you cut it, though, they’ve given their lives to the environment and its preservation. Their 30 years of research has taken them into the Yukon, the depths of Ontario’s Algonquin Park, across BC and into the world’s jungles and savannahs.

Not people to shy away from a challenge they’ve mixed it up with their political counterparts at the provincial and federal levels. John advises on environmental policies ranging from the establishment of national parks to protecting wolves. Some listen, others don’t.

Of these, John says the former federal minister for the environment in the Mulroney government, Tom McMillan, was probably the most receptive to their concepts and strategies.

“When I went to make my presentation after chairing a task force on how to complete the national park system, I started to tell him what my report was all about. He surprised me by stopping me and saying he’d read it—which a lot of politicians don’t do—asked some good questions, agreed with me and we went on from there.”

Less environmentally sensitive was a certain minister of natural resources in Ontario. Our research had shown a need to create a protective zone around Algonquin Park for the wolves that move in and out of the park. Outside park boundaries, hunters were trapping the wolves with snares because they believed they were killing off the deer. This trapping diminished an already endangered wolf population.

According to John, the hunters had the ear of the then minister who refused to implement the ban. However, when the current McGuinty government took over, the new minister, David Ramsay, weighed the evidence and exercised his prerogative and established the no hunt zone around the park.

Like Ontario, British Columbia has lately decided to go into wolf control to protect the mountain caribou population.

“They’re ignoring the real problem, which is over-logging of the old growth forest and recreational access to the wintering grounds the caribou depend on.”

Part of the story is covered in The Ptarmigan’s Dilemma.