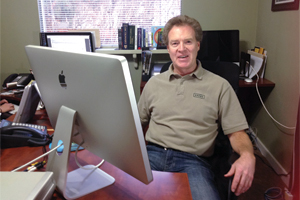 I just read yet another blog predicting the demise of magazines. I’m a little confused because, in reality, the T-shirt I’m wearing has more views than his website. I leave the blogger-dude, wondering how I ever found him, to summon up the Obi-Wan Kenobi of the Internet—Google herself. I gasp out loud at the news that there are 627 million results for “the death of magazines” search. Sigh. I tear up, move my Mac out of the splash zone and begin reading the awful results. I get through a little more than half before it occurs to me that Okanagan Life is not the only local media dying today; the other media might also be getting a spanking from this all-knowing, omnipresent, lord of the things.

Indeed, Google’s death warnings for traditional media are ominous: 738 million results for the death of newspapers, 347 million for radio and 2.25 billion for TV. Billboards get a paltry 68 million—proof that Google cannot read minds—and funnily enough, only 3,640 results for Logo’d Urinal Cakes. Now if we were to use typical Internet math, like the kind they used for Facebook’s IPO, then we would total all the results to find that 3.6 billion “death searches” have effectively doomed traditional media.

I move my Mac to higher ground, ponder what “results” really means, and I phone—nay, Facebook—my traditional media brethren to meet me at the site, I mean location, of the Okanagan’s first media, the Kelowna Daily Courier. Most community newspapers started in the 1900s, followed by magazines, radio and TV. If we are to believe the web stories, blogs and even our own mainstream media, it is curtains for traditional media in the Okanagan Shuswap. We might as well write our own obituaries. The new media have taken our cakes—eaten them, too.

But wait a minute. Magazines, newspapers, radio and TV have been around a very long time in the Okanagan Valley and they have a proud history. The notion that each new kind of media will kill the ones that came before it has been around for centuries and the theory has been disproved time and again. In fact, if I had a nickel for each time a pundit, or guru or ninja predicted the death of our industry, I’d be richer than Zuckerberg himself! If you think I’m embellishing this death watch, just read the 2007 Social Media Manifesto from Brian Solis…

“With the injection of social tools into the mix, people now have the ability to impact and influence the decisions of their peers and also other newsmakers. Social media is not a game played from the sidelines. Those who participate will succeed—everyone else will either have to catch up or miss the game altogether. Engage or die.”

Engage or die. Wow, those are pretty strong words from a guy who also embraced Chris Anderson’s Long Tail theory around the distribution of web wealth. After writing and blogging about it for years, The Long Tail author and Wired editor finally admitted that it is hard to make money in the tail; a drastic understatement to say the least. The Long Tail reminds me of Reganomics, where corporations were handed the code to make trillions of dollars that would somehow also float the boats of the middle class on their meteoric rise to the top; or maybe the money would just trickle down. It did neither. Eric Schmidt, former Google CEO, said it best: “While you can have a long tail strategy, you better have a head, because that’s where all the revenue is.”

A simple switch from Google to Yahoo yields drastically different numbers. When searching “the death of magazines” Yahoo only found 62 million, 10 times fewer than the hundreds of millions fetched by Google.

How could the numbers be so radically different? Maybe the execs at Google are eating too much cake too? Google controls 80 per cent of the search business; a monopoly if ever there was one. Facebook is another web monopoly that is producing billionaires who do not shop Okanagan Main Streets, but want to be your friend. (Like me, please.) Twitter is continuing to pay off their old investors with new investors’ money—a tactic that netted Bernie Madoff 150 years in jail.

This is why it is so refreshing to read about B.J. Mendelson who has just published a new book, Social Media is Bullshit, which takes aim at an industry rife with hucksters, charlatans and cheaters. I’ve ordered it from Mosaic Books (not Amazon) because I want to know if the reports of my death have been greatly exaggerated.

Mendelson doesn’t mince words when he describes the Cyber-Hipsters riding the wave, perpetuating the hype and engineering confabulation.  Says Mendelson,  “A Cyber-Hipster is someone of little discernible talent in the field they’re discussing, who hops on the latest technological craze, and then talks about how it’s going to ‘change everything,’ without any (or suspect) evidence, in order to further their financial agenda through speaking engagements, book deals, and generating page views to please their (or their employer’s) advertisers.”

His theory, based on years of social media experience, is this: the small businessman has been hoodwinked. Social media might only work for movie stars, media and professional athletes; it does not work for small business. The web has created seven monopolies faster (and bigger) than at any time in human history. Do you think they might have an interest in perpetuating the myth?

Governments usually force the break-up of monopolies because they spell disaster for a capitalistic society. The French have come up with their own style of retaliation. They have made it illegal for their traditional media to say, “follow us on Twitter” or “like us on Facebook.” They rightfully argue that they, too, were hoodwinked into providing billions of dollars of free advertising for Facebook and Twitter.

Read even one chapter from Dan Aeriely’s Predictably Irrational to see how easily humans are misled, misinformed and misguided. Perhaps we need to understand that human bias is rampant. Are we capable of noticing if or when or how often we have been fooled?

An October 2012 Adobe Online Advertising Study backs up most of what Mendelson is advocating. The survey discovered that 68 per cent of consumers find online advertising annoying, 51 per cent find it distracting, 38 per cent invasive, 16 per cent creepy, and 6 per cent go so far as to call it evil.

So many small businesses have invested quite large sums of money in social media and
haven’t come close to recovering their costs, let alone making a profit.

Just for fun, and since I’m dying anyway, I Googled all of us at once. “Death of traditional media” only got 76 million hits. That is shy of the 3.6 billion we arrived at using Facebook math.

For the record, I do not want new media to die, but I do want the hype to. Marketers are so confused. Right now, everybody is either guessing or making it up. Neuromarketing and neuroscientific research will play a huge role in determining who really influences the consumer and who really controls the “like” button. AdAge reports that there are 181,000 self-proclaimed social media mavens, gurus and ninjas out there, up from a mere 16,000 in 2009. There are even 174 people who describe themselves as (I’m not making this up) “social media whores” in their Twitter bios.

The digital and social media industry executives have taken confabulation to a whole new level. Never have so few confabulated so often, to so many, so quickly, in the history of the human race. Many good, wonderful and kind people have been hijacked into thinking the hype is real. Upton Sinclair said, “It is impossible to get a man to understand something, when his salary depends on him not understanding it.”

So, the reports of Okanagan Life’s death have been greatly exaggerated. So have the reports that my brethren are dying. We didn’t ask social media to die, but maybe we should meet with the Daily Courier, CHBC, the radio stations and others to plan a strategy of authenticity for media buyers.

For 25 years, the magazine professionals at Okanagan Life have been honest and forthright about our audited circulation, our estimated readership and our unique ability to influence readers emotionally. The Adobe Online Advertising Study also asked consumers if they enjoy viewing/reading advertisements and where they prefer to look at an ad. The results: social media, 3 per cent; window display, 6 per cent; favourite website, 11 per cent; favourite TV show, 23 per cent; and favourite print magazine, 45 per cent.

When marketers were asked the same questions, they actually rated favourite print magazine 10 percentage points higher than consumers did at 55 per cent approval. It appears that magazines transcend the “like” button. Not bad for a medium on its way out. ~John Paul Byrne