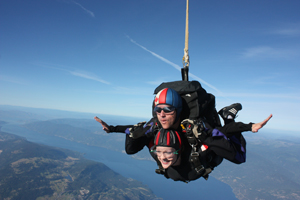 A red blob splattered across a green canvas. That’s how I’ll look if things go wrong today. I am plummeting from 11,000 feet over the Okanagan Valley with nothing but a Russian man strapped to my back. If we can land without looking like a Jackson Pollack painting...across the Vernon airfield I’ll have another notch on the belt of my amazing cultural experiences.

Hold on. I’m skydiving. What the heck does that have to do with culture? At first glance I didn’t make the connection, neither did my already accommodating editor.  But when I asked the team at Okanagan Skydive, they were quick to defend their craft. “Sky-diving has an amazing sub-culture,” pipes Calvin Johnson, a jumping veteran, as he packs parachutes for the dive. The energy in the room ignites. The paradigm of what I think culture is cracks open.

The word culture is defined by broad strokes and doesn’t seem to have one hard meaning. In general, it relates to groups of people who share common behaviours and language linked to the pursuit of something creative. Canadian culture embodies all things quirky and creative we do as Canadians. If Calgary’s Testicle Festival and Windsor’s Pumpkin Race can be seen as part of our culture then surely those who ride the skies are legitimate links to it too.

I ask the owner of Okanagan Skydive, Bret Chalmers, what he thinks. His exuberance and love for life cloaks him with the air of a childlike superhero. He also looks a little like actor Ralph Fiennes who played a villain in the Harry Potter series. If he puts on a mask and tells me to leave the plane in a seething English accent we can perform a one act battle between Hermione and Lord Voldemort though the skies. Says Bret, “I’ve never known any other activity where grown men and women can act like five-year-olds on a playground again. The people you jump with are your family. It’s a community. We trust each other with our lives. You find these like-minded people anywhere in the world who will welcome you with open arms, who look after you. It’s part of our culture and an amazing way to see the sights and get to know the culture of another country.”

In a way, they’re flying ambassadors.

Not only has Canadian skydiving made its mark on the world with innovative techniques, Bret also points to the creative side of his craft.

“It’s about the way that you’re able to fly, the planned jumps with a common goal, other ones that are totally free. Sometimes we play a game of tag up there. There’s also artistic dancing.” Much of the practice seems to be about pushing the limits of human potential, another component of what culture’s all about.

After training we hop in a small aircraft piloted by a grey-haired maverick. I’m pretty sure he hums the theme to Top Gun as we take off. Circling higher I take in the incredible views from the window and breathe deep. Then I hear the door open, gather all the courage I can find, and with the help of my tandem guide, get launched into the great wide open.

Bret’s selling art in the form of a unique experience. One that demands you look fear in the eye, tilt your head up and have faith you will survive this day. If only I could frame something like that to look upon as I head out the front door each morning.

During the free fall my fear becomes exhilaration. I’m locked in the awe of a thousand symphonies, a hundred dances, a single masterpiece that is this moment. Bret soars around me snapping pics that capture a thrill so great my heart’s torn between bursting from the beauty of sunlight bouncing of lakes and valleys and the waving white tips of the Monashee Mountains, and having a mild heart attack right there in my jumper-alls. Not from the terror of dying, mind you, but from thundering through a rush of life. Whether it can be classified as part of our culture or not, I can say from experience that to skydive is an art worth cultivating.