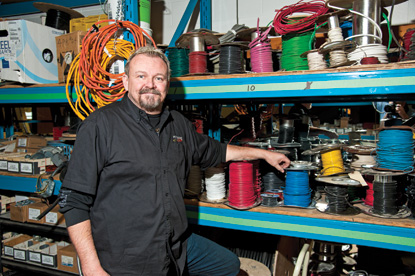 Locally, one of the best sectors to be in after high tech is residential construction. Rob Rickard (pictured) who owns Hotwire Electric, along with his wife Salina Colpitts, has been installing and upgrading electrical systems throughout the Valley since 1994 and he’s seen both the good and bad sides of small business.

“We are as busy as we have been for the past two to three years and business is good, but challenging.”

There are a few concerns that would make it easier to do business in the Valley. “Fuel costs could be lowered,” whether by a reduction at the pumps or increased tax rebates. “Affordable housing makes it hard to pay a living wage. Real estate prices have to come down and we need to have a cap on the amount of contractors in a region, like the taxicabs,” says Rickard.

“I love the business and I’ve been blessed to have a great manager (Wayne Warner) working with me along with my wife. Wayne’s dad acted as my mentor when I was starting out so I owe him a lot.

“Doing business in the Valley can be a pain in the *** at times when you are working with the trades. My biggest problem is finding good, reliable people. They want big money, the kind they were earning in the oil patch, and that just isn’t possible in the Valley. Out clients aren’t major corporations.

“During the oil sands boom, I lost 21 guys to the oil sands. They would leave with no notice as soon as the hiring hall called them. That’s been one of the biggest problems here—the unions poaching my guys. They left for better money and when you look at it that way, you couldn’t blame them, but they left me in the lurch.

“Now with Alberta in the tank, they’re flooding back into the Valley and coming to me for jobs. I can’t trust them to do it again if times improve so I really want to make sure I’ve got dedicated people.

“Many of the guys I don’t hire buy a van, get some supplies and go out on their own. They’re so many of them that there is not enough work so they start slashing their rates hoping to pick up jobs here and there. What they’re doing is killing the businesses who are here and who are operating on small enough margins as it is. 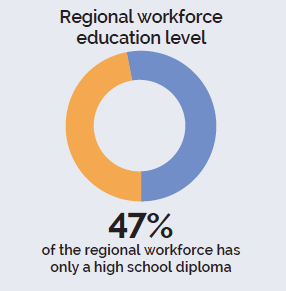 “The guys I’ve got now are all pretty good. I don’t need to micromanage them, but when they need expert input, they’re not afraid to come to me or Wayne.”

Rickard, who has experience in Alberta as well as British Columbia, has some concerns about provincial regulations. “BC is very lax when it comes to contractor licensing. In Alberta, for example, you need a master’s certification as well as business courses to get a contractor’s license, but not here… And the provincial government needs to change the [Builders] Lien Act to make it easier to collect debts owed to the company.”

But for all that, Rickard sees his company as a contributing part of the community. He and his team clean windshields at a local McDonald’s drive-through to raise money for Ronald McDonald House on McHappy Day. This unintentionally paid off with new corporate business for his company—proving there is good karma, even in business. 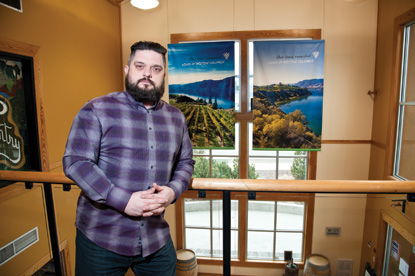 One of the stumbling blocks for a lot of budding entrepreneurs is financing. Both Veitch and Rickard have been given a tough time by major banks even though they produce sound, needed products. Jason Cox (pictured), the president of the Penticton Chamber of
Commerce (who also sits of the board of the BC Chamber) has had plenty of experience with financing companies, but from the other side of the desk. He was the merchant banking officer for a highly respected provincial credit union before striking out on his own.

“From the bank’s perspective a small business should be an investment. People thinking of going into business should start by developing a relationship with their banker. This can show them where that particular business sector is headed and a banker can also tell them whether their business is looked upon in a friendly light or if the bank has been burned by that particular industry.” It’s always good to know if a bank has been forced to foreclose on other similar companies, resulting in a glut of machinery that isn’t making any money or servicing the bad debt incurred by the business. That relationship will depend on the individual banker. Like junk yard dogs, not all bankers are as friendly as they seem.

Business plans are a requisite for getting to the batter’s box let alone first base. “New business people,” Cox says, “should consider at least two business plans to present to the banking institution. Plan A, should demonstrate how the business will pay back the loan, provide a living and grow in the market. That’s ideal. Plan B is: ‘I have equity to borrow against.’ Usually a house or other real estate.”

Anyone going into small business should have the support of their life partner. “If your wife [or husband] doesn’t support your business plan, why should we [the bank]?”

There are more ideas out there than good ideas. Some business plans simply show what the business owner thinks the bank will like. Instead, says Cox, “they should be preparing a plan that shows how the business will operate and which they’ll follow.”

Cox, who now operates as a business plan consultant, sees a lot of people who know their trade or service, but don’t know how to make it work. As a banker that’s one of the things he looked for. He also sees people who go into a business because it was a passion and they fantasized about doing this all day long. The problem is they’re really not interested in actually being in business.