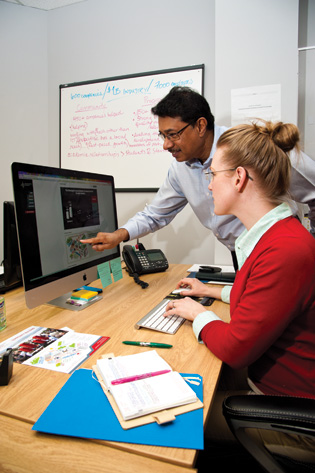 Strong efforts are being made by government-funded agencies like Accelerate Okanagan to become part of the new information economy .

CEO Ragwha Gopal (pictured) is quick to point out that there are 86,600 tech jobs in BC today and that number is growing. He also notes, “that BC tech sector wages are 60% higher than the provincial average.” Part of Accelerate Okanagan’s pitch in promoting the tech sector is that, “It is now possible to build a billion dollar company on your couch… in the Okanagan.”

Although the statement may be a little ambitious, there are certainly a number of small business people who have succeeded in making sales in the hundreds of millions of dollars. Lane Merrifield, Lance Priebe and Dave Krysko started Club Penguin in Kelowna on their credit cards and personal lines of credit. After testing their product through a variety of web applications, they officially launched in 2005. Two years later they were boasting a user-base of 12-million kids generating annual sales of $40-million. This caught the attention of the Disney mega-corp, which purchased the business for $350-million with promises of roughly another $350-million through bonuses.

So it can be done—just not to the billion-dollar level yet—but it is coming.

The province is staking a lot on information technology and high tech manufacturing. It believes this sector will be our next economic base and through these businesses, the rest of Okanagan businesses will benefit from the trickle down effect. 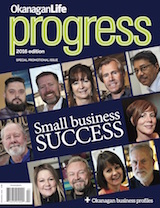 Information technology is one of the new global businesses that know no political boundaries. It’s based in California and India, Australia and the Philippines, China and Korea, Germany and France. In fact IT and high tech is being developed just about anywhere there is an electrical and Internet connection. It is also becoming a prominent feature on the landscape of Okanagan business. Locally, it’s a billion-dollar enterprise with 558 businesses employing 6,551 people. Thirty-eight per cent of these are under the age of 34 and 27% are female. Each company averages eight employees.

This sector can be confusing. If you’re over 50, it’s likely you may not be fully knowledgeable in the various areas of the IT world. To keep it simple, 36% of the total IT companies produce technology software (programs used for everything from designing products to instructing a robot how to build those products) and services (actually operating those programs for clients and building websites); 33% are involved in new media (social media being a prime example—think Twitter, Facebook and Instagram) and Internet technologies (providing specific working platforms—like shopping cart programs—for a variety of businesses); 11% are involved in life sciences and biotech; 8% produce products used in environmental technology; 8% are in the electronics and peripheral field; with 3% working for the aviation and aerospace industry.

So far, this has generated $42.8-million in revenues provincially and added 1,138 jobs to the economy. And it has attracted more than $126-million in investments—although it is not clear whether that is local money or comes from investors from outside BC.

Dave Veitch (pictured), owner and CEO of Anodyne Electronic Manufacturing (see Okanagan Life Progress 2011) is someone who knows the benefits of the high tech industry using modern information technology. Anodyne (AEM) produces instrumentation for helicopters and fixed wing aircraft as well as public address systems to be used on the outside of aircraft. He’s been in business since 2009 when he and his wife Diana purchased the company (then Northern Airborne Technologies) from its parent company, Cobham. The larger parent was about to move Northern Airborne to the United States when the Veitches made a bold offer. At first it was a struggle. The major Canadian banks weren’t in a mood to play and Veitch finally turned to HSBC to get his funding. Since then business has progressed and the company has grown.

“If you’re not set up with a bank,” he advises start-ups, “and don’t need them, it’s best to avoid them.” However, he adds, “…Southern Interior Development Initiative Trust (SIDIT) is an excellent avenue to explore for financing and grants.”

While new contracts have arrived from as far away as Australia, Veitch still faces many of the problems of other small businesses. “We don’t do much business here [in Canada] and the market for our product has taken some hits recently. Bell Helicopters is down about 15%. But we still do a lot of contract manufacturing for companies like Cobham and we’ve taken on a great new contract with Skytrac, a local company, and we’re negotiating with some big new names from California.”

On the brighter side, “The Canadian dollar has gone in the right direction for us, dropping like it did. We still have some material we need to pay for in US dollars, but local costs, like labour are all paid for in Canadian dollars because we manufacture locally.”

“It is now possible to build a billion dollar company on your couch… in the Okanagan.”

The P.A. (public address) system is a burgeoning business. AEM refreshed the product, developing new speakers and amplifiers. The market for these is with police and firefighters as well as search and rescue. “A couple of years ago when they had all that flooding in Calgary, the emergency workers flew over the endangered suburbs warning people about the rising waters and the need to evacuate,” Veitch explains.

“We’re also making master caution panels for helicopters. They’re basically check engine lights for pilots. They used to have incandescent lights behind them, but these old systems used to fail because of the aircraft’s vibrations. Now we’re making them with LED lights and the manufacturers and service techs love using them because they are a retrofit that goes into the same slot the old panels used to use.”

Veitch does have some concerns about doing business in BC. “WorkSafe BC is an absolute nightmare to work with, as is the rest of the provincial government. Their regulations are convoluted and unclear.”

One of his biggest problems is getting staff. Local techs trained by Okanagan College come with a bit of knowledge—particularly in the supply management area—but they don’t know how to improve processes. Veitch hires them in the summer and teaches them so they will become a valuable asset. Too many want Veitch to train them in this area and therein lies another problem. Many won’t be bothered to undertake the training on their own if they have to pay for it themselves.

“As far as training goes, BCIT (British Columbia Institute of Technology) does have good programs and so does Accelerate Okanagan.”

Veitch continually works to learn more about business himself. He is part of a group of owners that meets once a month under Peter Jeffrey, president of Okanagan Peer Mentoring Groups, for private courses.