Where is the Okanagan economy headed? That’s the question on everyone’s mind these days. With the crash in oil prices and a stock market tanking, largely based on China’s economic output, do we have any wiggle room to prosper and grow here in the Valley? According to local business people, the answer is an unequivocal “Yes”—but with some understanding and strategies to deal with current conditions.

One of the reasons it’s so hard to assess what’s going on is the lag time for data to be collected and factored into the overall picture. Many surveys on which economists base their predictions are several years old and don’t take into account recent events that sandbag their assumptions. 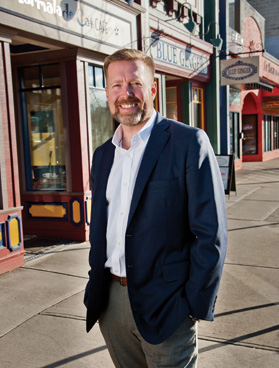 According to the WorkBC website, the latest numbers for the Thompson-Okanagan regions show a total population of 433,000 people with 244,300 in their working years (aged 15 to 64). As of December 2016, overall regional unemployment sat at 7.3%, while Kelowna fared a little better with 6.6%. This lower unemployment figure is not surprising as the Central Okanagan/Kelowna region is the most urbanized population (82% urban as opposed to 28% rural) of the five districts within the region.

Interesting, because despite the disparity in urban vs. rural population, the largest employment generator in the Thompson/Okanagan is the agricultural sector, with 23.2% of the total number of jobs. Kelowna is the anomaly in the equation because, as Kelowna Chamber of Commerce president Ken Carmichael (pictured) points out, “Kelowna is a city, not just a retirement community, and businesses want to locate here.”

Across the province in 2014 (these numbers may have changed since the oil and stock market crashes of the past eighteen months) the Thompson/Okanagan region ranked fifth in a list of six regions for full-time employment.

However, the market outlook for job creation from 2014 to 2024 predicted an increase of 37.5% in new jobs and 62.5% for replacement jobs—due to retirement, outflow emigration and other causes.

Other groups with a vested interest are watching the Okanagan closely. The Central Okanagan Development Commission asked Malatest Program Evaluation and Market Research to complete a labour market outlook study. The study was released on June 16, 2014 and covers the period from 2014 to 2020.

Oil prices were starting to wobble by this point, but they hadn’t crashed to the near record lows of 2015. China’s woes were some distance in the future and that economy was still considered the bright star the world’s trading nations would follow to prosperity.

The Malatest study took a pretty sobering look at local conditions. On the plus side, it predicts an increase in the workforce: 18.5% in the six years post 2014. But there’s a problem: our workforce is ill-suited to answer the needs. New positions opening up will demand an educated workforce. About two thirds of all new hires will require some post-secondary education. As of 2014, 47% of the local workforce only had a high school diploma.

Since its creation as a province, BC has had a resource-based economy. When you could make big wages cutting down trees or digging rocks out of the ground, an education seemed unnecessary. Because of this, British Columbia has not placed the same emphasis on higher education as other provinces. The Malatest study ranks BC as eighth overall in terms of provinces whose workers have an undergraduate degree or equivalent. Even in engineering there’s a lag. The national average is 46.1 engineers for every 100,000 people. BC produces only 27.7 engineering grads. We could train more, but first we have to put the programs and seats in place.

The Malatest study predicts that unemployment rates should remain close to stable until 2020. It does predict a slight climb, 0.5% over the six years, but there will be changes in the make-up of the workforce. The number of men participating in full time employment will decrease by 0.3% while the number of women will increase by 1.3%.

As real estate prices rise in Vancouver and baby boomers reach the end of their working lives, they are migrating east into the Okanagan. Fifty-five per cent of our inflow comes from within BC. Many of those people are arriving from the coastal markets with wads of cash generated by runaway housing prices and they have no intention of working here. Internally, we’re seeing people on the move to Kelowna from the north and south ends of the Valley to take advantage of city amenities and better employment opportunities. Inflow relocations from other provinces and outside Canada comprise 37.6% and 7.4% respectively. At the same time, there is a definite outflow of population from BC. Between 2006 and 2012, nearly 81,000 people left the province producing a net population increase of slightly more than 22,500 new residents.

The Malatest study also points out the fact that the Okanagan Region cannot depend on traditional business models any longer if it hopes to grow. In the future, we may not be labouring to cut down trees. New and proposed trade agreements like the TransPacific Partnership will put shut to that.

The study’s authors go on to point out that as our current labour pool stands, Okanagan workers will only be able to fill somewhere between 52.3% and 69.4% of all new hires.

We will always have tourism creating jobs in the Okanagan. At best, the majority of those will be low-paid, seasonal positions. To earn a living income in the Valley, a person must be in fields like the trades, medicine or education. The alternative for people without the requisite training to work in any of these is to attempt to build a small business.