The play’s the thing: The training and development of young artists has been a priority for Western Canada Theatre since its inception in the 1960s. Its education and outreach program offers summer production classes for budding thespians. From day one, focus is on the end product, a play performed by students. Children learn the rehearsal process, in depth characterization, script study and performance technique. Acting adventures or acting essentials classes are a prerequisite for production classes.

Director: “I love to see the children gain confidence. Seeing the child leave the program with their head held a little higher is the greatest gift,” says education coordinator Terri Runnalls. “My passion is passing on my love of theatre to another generation. Seeing them create, explore and learn more about themselves through art is truly rewarding.”

Stars of the show: Girls and boys aged 8 to 18. “It is incredible. A group of kids can put on a full length play in just two weeks. Their dedication is inspiring,” says Terri.

On stage pals: “Registration usually tops out at around 20, but is always dependent on the script we chose,” says Terri. “We try to make it as big as we can, as the program is popular.”

Wheels on the bus: Summer courses take place at Thompson Rivers University at the Pavillion Theatre and at a downtown location. Both are on bus routes.

Ready for my close-up: Casual attire until costumes come into play at performance time.

Just sayin’: Between grades 6 and 9 Kamloops teen Renee Bussey, now 15, attended several prerequisite classes and two production sessions. “They were all a really fun experience. I got to meet people of similar interests that I might not have met in my regular school. The instructors are very helpful. I learned the role you want is not necessarily the role you will get, but it’s important to trust the casting wisdom of the instructors and be open to try new things.”

Show me the money: $400. Anyone can be a star! Bursaries available.

Whazzup? Rated as one of Canada’s best mountain bike locations, with 15 per cent of the terrain rated as beginner territory, the Cranked Kids Summer Camp Program is a great way for young riders to get outdoors, make new friends and learn how to ride downhill and cross country trails safely and with confidence.

Wheels on the car: Pick up and drop off outside the ticket office near the village playground. 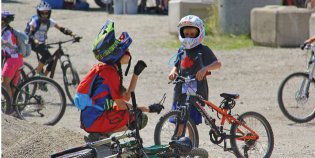 School’s out: After each session kids receive a report card outlining what they worked on that day and skills to practice for the following week’s camp.