Depending on how you read the statistics, the glass is either half empty or half full when it comes to forecasting real estate in our region. Traditional construction is no longer the norm, with prices hitting the high end of the tolerance scale for single-family dwellings, but a growth spurt in multifamily units, like townhouses, is looming on the horizon.

According to a recent Canadian Mortgage and Housing Corporation (CMHC) forecast for all of BC, and comparing current trends to the rest of the country, real estate markets will see a gentle quarter-to-quarter increase of slightly better than one per cent throughout the year, though predictions for the first quarter of 2016 indicate a drop of three per cent in building starts for single-family units and two per cent for multifamily dwellings.

Overall starts in Kelowna and the surrounding Central Okanagan in 2015 are predicted by CMHC to stay on par with 2014, but going into 2016 a modest downturn in sales can be expected.

Many of the reduced numbers that will be seen this year come from comparison with 2014, which was a robust year for sales in real estate. There was a lot of product available for development. In 2015, the amount of raw building land is beginning to be balanced off.

Penticton sales felt this, almost flat-lining until Greyback Construction and the Penticton Indian Band partnered to create Skaha Hills. Phase one was opened for sales last year with 47 of the 600 homes in the 550-acre project. Expectations were that it would take two years to sell this phase; it sold out in two-and-a-half months. Phase two of the project is under way with six more phases to go.

“We hadn’t even started marketing in Alberta. The sales that came from there were from word-of-mouth,” says Curt Jansen, VP of sales and marketing for the project. “When we did our homework, we tried to think as conservatively as possible. We believed 15 to 20 homes would sell in the first year.”

There are a number of reasons Skaha Hills has taken off. Ironically, at a time when economists see First Nations land claims as a stumbling block to foreign investment in our country, the involvement of the Penticton Indian Band positions Skaha Hills owners “strategically for tax benefits—no G.S.T. or transfer taxes,” according to Jansen, which can save buyers up to $50,000 on their purchase.

Although Jansen credits the tax benefits and the development’s lake access, winery and golf course with much of the success, he says that most importantly it’s due to the fact that this is the first new property available in the Penticton area in recent years.

“A lot of people have been sitting on their hands
since 2008, waiting to make a move..."

“A lot of people have been sitting on their hands since 2008, waiting to make a move,” he says. “Now, they want to retire in the Okanagan so this development offers them a property at a reasonable price.”

In looking at his clientele, Jansen sees a bright future for upcoming stages of the development. One group he sees expressing interest is the soon-to-retire segment of the population. “Some people are five to seven years from retirement and are taking advantage of the availability and pricing to buy now, maybe rent it, and move in when they finally retire fully.”

Many of the Okanagan buyers tell Jansen that a driving factor in their decision is their memories. “I’ve had a lot of clients tell me about spending their summers at Wright’s Beach Camp and that’s one of the main reasons they’re buying here.”

But another important part of the equation is the energy efficiency of these new homes. Skaha Hills has been recognized as the most energy efficient housing development in Canada. It won the 2014 Tommy Fortis Award for Building Energy Efficiency, presented by the Okanagan chapter of the Canadian Home Builders Association.

“People want lower operating costs. It costs a little more to build an energy-efficient home, but when you try to re-engineer an older home for better efficiency the costs are huge and it almost cannot be done. People buying an energy efficient home will pay for it relatively quickly in their savings on utilities.” 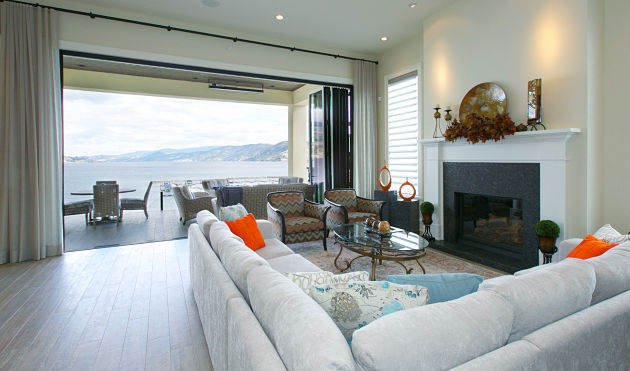 To the north in Kamloops, construction and real estate have a slightly different complexion. “We can’t tell if the downturn in the oil patch is starting to effect our sales yet,” says Ingrid Pfeiffer, president of the Kamloops Real Estate Association. “Last year prices went down and it’s still a buyer’s market here. Multi-family dwellings make up the bulk of sales. They’re selling for $280,000 to $320,000. A lot of boomers are now downsizing.

“This is good for the market because we’re seeing houses further out from the core, in neighbourhoods like Westside and Brocklehurst, offering some good deals on single-family detacheds with larger yards. One house with three bedrooms up and one down just sold for under $320,000.”

Dee Crinion, sales manager at Shuswap Lake Estates, says they’re having a great year with 12 new home starts. These aren’t huge houses; they run around 1,500 square feet per floor. Shuswap buyers used to be mainly retirees, but now they are younger families seeking to raise kids in a “cottage” atmosphere. Others are 50-somethings who can work from home, and there are still a few snowbirds buying.

“The drop in oil prices isn’t apparent yet,” said Crinion, “except that people are being more cautious about buying—not so quick to jump into buying a lot.”