The brave truth is this UBC Okanagan team of lie busters is attaining worldwide acclaim by seeking greater understanding in the fields of malfeasance, untruth and secrecy

Sarah (not her real name) sits in an interview room. Thirty minutes tick past.

“What can you tell me about the incident,” asks the interviewer.

The questioner, well trained in police interview tactics, reassures her. “Most people are able to retrieve lost memories if they try hard enough.” 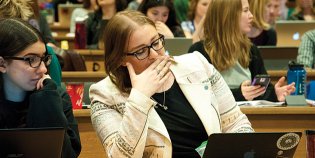 It takes just three sessions for Sarah to admit her guilt. Prompted only by the small facts of her age at the time of the incident, her friend’s name, the city where the crime took place, and how her parents recall the event, Sarah tells the story of committing an assault.

Except—no crime was actually committed. The memory was implanted.

Remembering a crime you didn’t commit

Sarah is just one of 70 undergraduate students who took part in groundbreaking research that has been shaking up the science world. This disturbing study found that students could easily be coerced into believing they had committed crimes that were simply made up—concocted by their parents and researchers. False memories were reported in an astounding 70 per cent of participants, who volunteered a detailed false account of committing a crime (theft, assault or assault with a weapon) that led to police contact in their early adolescence. Not a singe one had ever been in contact with the police during their youth.

“Although the interviewer in this study provided only a small, predetermined set of misinformation across the interviews, participants increasingly tried to make sense of the introduced false events by spinning explanatory frameworks around what they thought could have happened,” says Stephen Porter who coauthored the study with Julia Shaw.

“Not only could the young adults in our sample be led to generate such memories, but the memories themselves were richly detailed.”

The landmark study, Constructing Rich False Memories of Committing Crime published in March 2015 in the journal, Psychological Science, is making headlines throughout North America, with reports by NOVA on PBS, the CBC, The New Yorker and Discover magazines.

As professor of psychology and director of the Centre for the Advancement of Psychological Science & Law (CAPSL) at the Okanagan campus of UBC, Porter heads up an inspirational team of dedicated scientists that are determined to answer age-old questions—why do humans lie, how pervasive is our lying and why do we fall for it? 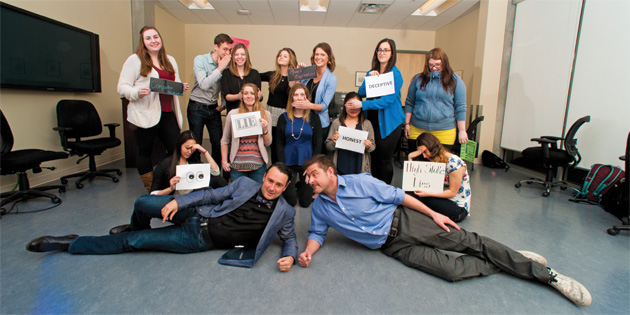 Our justice system is built on the foundation that memory is reliable. The accounts of witnesses and the confession of defendants play a key role in who ends up behind bars. Porter believes his research is essential in the quest to prevent forced confessions, to put a halt to questionable interrogation tactics that lead to wrongful imprisonments.

During the interviews in the Porter-Shaw study, participants were encouraged to recall the event and told to practice visualization each night at home. Within their brains the real memory fragments — who their friends were, how old they were and where they lived —wove into a real story that they came to believe. Imagined memory begins with what something could have been like and turns into elements of what it would have been like, which become elements of what it was like.

“The mind seems to be able to construct information from internal and external sources to generate a coherent but false picture of what occurred,” says Porter. The Porter-Shaw study shows that three conditions are needed for the generation of entire false memories: (1) the person must be convinced that the event could have happened, (2) he or she comes to believe that it did happen, and (3) he or she is helped by the interviewer to interpret thoughts, imagination, and fantasies about the event as memories. At the end of three interrogative and manipulative meetings, 70 per cent of subjects (students) not only misremembered that they were present at the crime—they admitted to committing the crime. 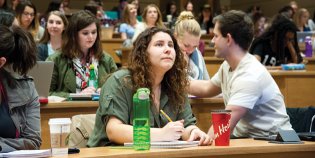 When asked how often people lie to themselves, Porter admits, “It’s impossible to quantify, but I would argue almost continuously, in terms of defense mechanisms like being in denial, rationalizing and avoiding the truth.”

People also have very poor memories. It turns out that every time an event is remembered—no matter how vividly—we’re actually misremembering the event.

Human memory is not a video recorder that can simply be played back or a file that can be retrieved; it’s an adaptive, evolving process. Memories are automatically rewritten each time a scene or circumstance is remembered.

Porter is also looking at how emotion can serve to enhance memory, but also increase memory’s susceptibility to misinformation, including widely publicized events from the media.

Starting with a neutral image, like a long line of passengers boarding a plane, Porter and his collaborators wondered if a study’s participants could be “primed” to report false information. For some, the plane image was positively described as folks heading to a sunny vacation spot; others were informed the passengers were being deported back to their war-torn country.

And then the manipulation began. Misleading questions planted details in their memories, such as the presence of a person or object that was not actually in the image. Questions like, “How many stars can be seen on the pilot’s hat?” were asked when no pilot was in the scene.

As expected, being exposed to misinformation was strongly associated with false memories. Participants incorporated misleading information into their memory nearly 60 per cent of the time. And those who were “primed” with a negative emotional story were more likely to develop major false memories.