The large, bright mountainside woollen goods factory, nestled in the lush tropical jungle outside Kathmandu, employs 50 people. “It’s a metal structure, on cement floors where the spinning, dyeing and knitting is done in separate areas. The workers are well fed, there is happy music playing, they have breaks during the day and time off for festivals,” says Derek. “There are lots of festivals in Nepal, so we have to get our orders in well in advance of when we need the goods.”

Derek and Brooke found the yakleather bags during their first trip to Nepal while wandering through Kathmandu’s tourist area, Thamel. “The owner was a university student who had started this business in a tiny shop. He called it Bright Future because he wanted a bright future for his kids. He is now married with two children. Every year we go back the quality of the bags gets better and his shop gets bigger. He now sells in Japan as well as Canada.” 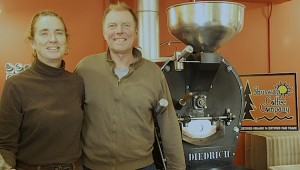 It may well come down to trust of international contacts and personal relationships. When you enter Salmon Arm’s Shuswap Coffee Company the aroma of the 300 pounds of beans, roasted daily by owner Tara Shantz and her husband Greg (left), is intoxicating. “We don’t have a personal relationship with our partners, but the company we buy our beans from, Organic Products Trading Company in Vancouver Washington, does,” says Tara. “They are the exclusive importer of Café Femenino coffee and founded the Café Femenino Project in 2004, a social program for women who grow, harvest and process their own high quality organic coffee.” Shuswap Coffee also sells organic Fair Trade coffee from other South American countries.

One of the original company owners, Joanne Sargent, went to Peru to film a documentary called Strong Coffee. Women she met proposed the idea of separating their coffee and selling it as a special commodity. “We pay more on top of Fair Trade prices and these women use the additional funds to improve the nutrition, health, education and living conditions of coffee growers and their families.”

Flavia Aarden-Kilger, managing director of Penticton’s Fair Trade Brokers Ltd., believes in the rigorous process of Fair Trade certification. After five years as an export manager for a Fair Trade food company in Europe, she returned to Canada. “I saw an opportunity. No one was importing grocery items. Now we import Fair Trade grocery products and chocolate bars and truffles.” Ingredients are sourced from Ghana, Ivory Coast, Malawi or Paraguay. Goods are manufactured in Europe as the source countries do not have the facilities to produce the goods or even the cardboard for packaging.

“Our production companies are audited every year. They must show they have paid or been paid the predetermined Fair Trade price for the ingredients. Also there are field visits to producers and to the facilities that manufacture our products,” she says.

An independent body called the Fairtrade Labelling Organization (FLO) determines what the minimum price of an ingredient must be for a farmer to have a decent income to cover housing, food, medical expenses and school for their children. On top of that the Fair Trade certified system also pays a 10 per cent premium that must be invested in their community. “Many have invested in a nurses station or bringing a doctor in once a month or hiring a teacher,” says Flavia.

After visits to some of these countries she has developed a personal connection with some of the farmers and become even more motivated to sell their products at Fair Trade pricing. “You see the good Fair Trade does and you want to expand your market so it has more impact.”

Clearly passionate about fair trade, Flavia points out there is a price we pay for buying goods cheaply. “You see it in the poverty stricken countries. We give to charity, why not simply purchase Fair Trade products so many of these countries need less charity or in a perfect world do not need charity at all. Like many of us, producers do not want charity, they want to work for an honest and fair wage.”

However, it seems for any kind of fair trade to be sustainable or ethical it really comes down to the consumers. “At Terra Incognita (in Vernon) the clientele ranges from 3- to 95-yearolds, often people who have travelled more or are armchair travellers,” says Cathy. “We used to be known as The Hippy Store but I sell to doctors, lawyers, accountants, assembly line workers and 7-Eleven sales people.”