The sun is dancing across the sky and spring is in the air. You’re ready to celebrate with your first round of golf. Hefting your bag over your shoulder, the weight adds only a beat to your brisk walk, but your buddy—the one who longingly eyed the golf carts—is looking a little red in the face. Beads of sweat pop out on his forehead and his breathing sounds a little shallow. You make it through the round, but on the way to the car after the 19th hole, he suddenly drops his bag and clutches at his heart. He sways, his knees buckle and the next thing you know he’s crumpled on the ground.

Do you know what to do?

Statistics say 20,000 Canadians will have heart attacks outside of a hospital this year but only 1 in 10 of them will survive—unless the victim receives immediate CPR.

What’s really frightening is that nearly half of bystanders (including those with CPR training) say they would be too scared to take action for fear of doing further damage if someone collapsed and stopped breathing.

Sound like the call of your Zumba instructor, urging you to keep the beat? In fact, it’s the mantra world heart associations want you to remember if you ever need to administer CPR. Gone are the guidelines that taught you to recall your ABC’s: secure a victim’s airway first, followed by breathing (mouth to mouth), then chest compressions. New guidelines say we sing a different tune where chest compressions come first—and fast—and for added fun, to the tune of the Bee Gee’s disco hit, Stayin’ Alive.

Yes, that 70s song is sweeping nations again—and it’s not because pantsuits are back. Doctors say chest compressions should be performed at a rate of 110 per minute—which is about the tempo of the aptly named Stayin’ Alive. Singing the song while pumping the chest not only helps those administering CPR keep the right beat, it may take some of the fear out of the situation and that can be crucial.

Led by the American Heart Association and endorsed by local chapters worldwide, the new order of operations is called CAB (compressions; airway; breathing) because chest compressions—even poorly done—increase the rate of survival after a heart attack by up to 400 per cent. That’s how to save a life and as far as this country’s ER doctors are concerned, it’s the moral obligation of every Canadian to know how to boogie the new CRP beat.

Members of the Canadian Association of Emergency Room Physicians (CAEP) recently released a position paper stating that too many people suffering cardiac arrests needlessly die because bystanders either don’t know what to do or are afraid to take action. While it’s true, ribs are often broken in the CPR process (particularly in the elderly), doctors insist cardiac arrest victims are already at risk—of dying. What’s a broken rib if a life is saved? As for fear of doing the procedure incorrectly, that’s where the new guidelines are designed to reassure people. Anyone can do chest compressions. Scared you’ll be sued? Canadians shouldn’t be concerned. Good Samaritan laws, under which a bystander who voluntarily administers assistance cannot be sued for wrongdoing, are in place to protect citizens.

Really, it’s this simple. “Starting chest compressions immediately saves lives,” says Dr. Michael Ertel, chief and medical director of the department of emergency medicine at Kelowna General Hospital (KGH). Along with colleagues, doctors Nick Balfour and Jeff Eppler, Dr. Ertel teaches general practitioners working emergency departments in rural locations about the new CPR guidelines. Ertel and Balfour also present the new Advanced Cardiac Life Support (ACLS) guidelines to 2nd year family practice residents working at KGH, many of whom will find work in similar, remote settings. While such skills are standard for all physicians, they become even more critical when the nearest back up or tertiary-care hospital is hundreds of kilometers away.

According to Dr. Ertel, perfect CPR can restore one-third of normal cardiac output and 10 to 15 per cent of normal blood flow to the brain. But perfect CPR is a skill that must be learned and so, while any chest compressions are better than none at all, Dr. Ertel strongly advocates for more education. “The general public should be encouraged to take a course in basic CPR,” he says.

To that end, CAEP suggests offering incentives such as 100 per cent tax rebates for those talking CPR courses and special tax exemptions for companies paying for CPR training for employees.

BC boasts one of the best, out-of-hospital, cardiac arrest survival rates in Canada, but we might do even better if this province adopted the measures of Alberta, Manitoba and Ontario, where CPR is a requirement of graduation.

“It’s a no-brainer,” according to Dr. Ertel. “When a cardiac arrest occurs, it’s an awful situation to witness, even for many of us who have been doing this for years. I can only imagine how horrible it would be for the general public to watch a family member or friend go down.” Not only does he support CAEP’s position that CPR training be mandatory in high school, Dr. Ertel would like to see it extended to other groups in the Okanagan—particularly those attracting seniors—like casinos, golf courses and the yacht club.

(automated external defibrillators) as well as the fellas I play pick-up hockey with,” Dr. Ertel says. He’d like to see educational resources for organizations promoting CPR, like St. John’s Ambulance and the Heart and Stroke Foundation of BC, expanded. “I think the majority of people in Kelowna would say that’s a good investment.”

“Our focus is on spreading the message of healthy lifestyle,” she says. “One in three Canadians will die of heart disease or stroke. In fact, heart disease is the number one killer of women—yet it’s often preventable.”

Aiming to educate the public early, Joanne is particularly proud of the Heart and Stroke Foundation’s HeartSmart Kids. “The program began in 1995,” she explains, “And we now have 904 teachers in the Thompson Okanagan and Kootenay area as certified instructors.” This year alone, the HeartSmart Kids program will reach in excess of 16,000 elementary-aged children. Part of the curriculum, the program comes with a manual for teachers and ties in nicely with the Heart and Stroke Foundation’s Jump Rope for Heart campaign, when kids collect donations and get active by skipping rope on a special day set aside for the celebration.

Dr. Ertel says getting CPR certified is “the right thing to do.” Bend an ear for 66-year old, Bill Ridinger’s story, and you’ll be inclined to agree.

It was the year 2000 and disco was long done, but Bill’s amateur sports career was happening. A Kelowna Running Club member, avid biker and master swimmer, the long time triathlete could have posed as the poster man for middle-aged jocks. Tall, lean, exceptionally fit and just a few weeks shy of his 55th birthday, he’d won the 400-metre freestyle at the BC Seniors’ Games in Kelowna. But when Bill pulled himself from the water at Parkinson Recreation Centre, he got more than the gold medal he’d fought for.

Celebrating poolside with friends, he was mid-word when the unthinkable happened. Bill had a sudden cardiac arrest and hit the deck—hard.

The first to get to Bill, lifeguards Louise Roberts-Taylor and Johanna Senechal started CPR, keeping him alive until emergency medical services arrived and took over, shocking Bill twice with an AED. In a coma for 24 hours, he can’t remember anything, but the terrifying time remains clear to his wife, Sharon.

Unsure if her husband had suffered a broken neck from his fall, never mind untold damage to his heart, Sharon wasn’t alone in her shock. “If we had a dime for every time someone said, ‘Not Bill’, we’d be rich!”

Miraculously, the damage to his heart was minimal and he went on to make a near-full recovery, running, biking, and swimming through the next 11 years—until this past fall.

Early October 2011, in a dramatic display of déjà vu, Bill was swimming lengths at Kelowna’s Parkinson Recreation Centre, when he sensed something was wrong.

“I’d just gotten in the pool and swam 75 meters—warming up, really—but when you’ve been swimming so long, you know when something isn’t right.”

Jane Jones, instructing lessons in the next lane, also sensed something was wrong. A fellow master swimmer, she knew Bill would never stop training so soon into his workout, so when she saw him sitting on the side instead of performing in the pool, she rushed over, encouraging Bill to lay down—and not a moment too soon.

“Again, I don’t remember any of it,” he admits. “But I’m told I immediately went into cardiac arrest.”

Jane and fellow lifeguard, Liz Tanner started CPR and with the AED purchased after Bill’s first cardiac event, zapped him three times. It would take 10 more minutes of CPR and two more zaps in the ambulance, before he arrived, alive, at KGH.

He was sent to Vancouver General Hospital, where heart surgeon, Dr. Guy Fradet (who will be the head of cardiac surgery when the Interior Heart and Surgical Centre opens at KGH in late 2012) implanted an internal cardiac defibrillator in Bill’s chest. Now, with a few months of recovery behind him, Bill is ready to resume his active lifestyle.

“One of the physicians said, ‘What’s the point in saving you, if you’re going to sit in your room,’” he grins. Walking near home and running in the pool, it won’t be long before Bill is pounding the pavement and churning up the water.

Asked if his incredible experiences have brought miraculous insight, he shrugs and smiles, “I regret never doing an Ironman. If you plan to do things, do them. You never know.”

“It’s not like Bill is going to pat the dog or kiss his wife more often,” Sharon laughs. “He already does that.”

Maybe being that kind of man to begin with had a hand in Bill’s recovery, but he is grateful to the people whose lifesaving skills truly brought him back from the brink, a lot of lifeguards, paramedics, physicians—and a little CPR. ~Shannon Linden

Interested in doing the right thing? Here’s a list of organizations in the Okanagan offering basic and advanced CPR training.

Enjoy the light-hearted (pun intended) look at life? Check out these hilarious YouTube videos to learn more about the new CPR guidelines and heart disease in women.

An app today may keep the doctor away 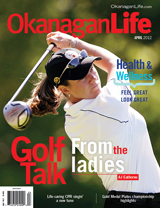