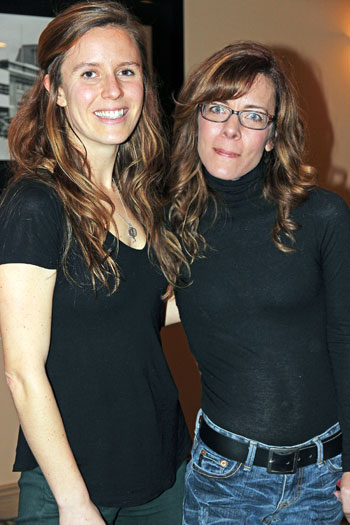 Dobozy, UBC Okanagan’s Writer in Residence, was the final judge in the annual fiction writing contest that gathered more than 85 entries. UBC alumna Dania Tomlinson’s story “Badlands” won first prize, with Dobozy saying the writer is "totally in command of the narrative."

“It’s very deeply felt, even heartbreaking (in the best sense of the word) in places,” says Dobozy. “The last sentence is startling and beautiful and lifts the story beyond itself—as most good endings do.”

The accolades mean a lot to Tomlinson, a Master of Fine Arts (MFA) graduate and current employee at UBC Okanagan. She also took part in the one-on-one writing workshop Dobozy offered local writers during his residency.

“Writing can be an isolating activity,” Tomlinson says, “and after completing my MFA and leaving the writing community that came along with that experience, I sense that isolation more than ever. To have such an accomplished writer as Tamas Dobozy validate my work gives me a boost of confidence. I have benefitted enormously from this year’s Writer in Residence.”

Second place in the annual writing contest went to Kelowna writer Bronwyn Berg for “The Weight of Things,” which Dobozy called really funny and beautifully restrained. Berg’s story wryly and tenderly chronicles the decline of a World War Two veteran and former railway accident photographer as he moves into old age and dementia.

Third prize went to another Kelowna writer and UBC alumna, Brittni Mackenzie-Dale, a graduate of the university’s Creative Writing program and a third-place winner in 2014. Her story, “That’s What They Call It, Anyways,” got the nod this time around.

Before introducing the winners and reading from his own work, Dobozy emphasized the importance of funding the arts and thanked the Central Okanagan Foundation for its longstanding financial support of the valley-wide contest.

The Okanagan Short Story Contest is sponsored by UBC’s Faculty of Creative and Critical Studies, the Central Okanagan Foundation, and Kelowna’s Capital News. It is open to all residents of BC’s Southern Interior.