Get ready for Family Fishing Weekend 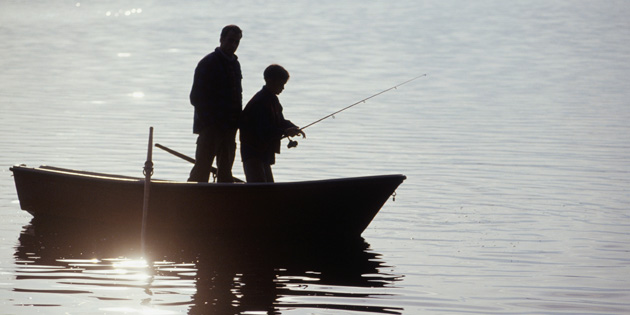 With his face screwed up in concentration, the small boy held his fishing rod up in the air and then flung it forward, where its tip vibrated for a minute, and the bobber and hook danced above the water—but no line went out.

He looked up at his dad with questioning eyes and was shown once more how to operate the reel so the fishing line would be free to snake out and drop his baited hook in the pond where he’d seen a fish come to the surface.

As he continued to cast his line out and reel it slowly back in, suddenly the tip bent and he hung on tightly to the rod, working hard to reel in the line.

Soon there was splashing right at his feet, against the dock. He gave a heave on the rod and a rainbow trout, with a rosy stripe along its side, flopped against his sandals. He grinned up at his dad, who helped him remove the hook from its mouth and asked if he wanted to keep it or return it to the water.

The decision was an easy one. He wanted to take it home and have it for supper.

All along the crowded dock, youngsters were busy with fishing lines in the water, guided by parents or volunteers from the Peachland Sportsmen’s Association (PSA), learning to enjoy the ages-old pastime of fishing—whether for supper, or just the thrill of the sport. 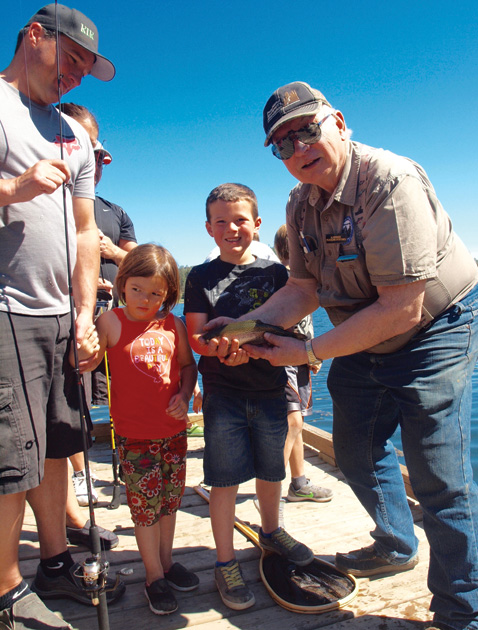 The new dock at Shannon Lake in West Kelowna is one of a number that have been installed around the province in recent years by the Freshwater Fishing Society of B.C., to allow youngsters and the disabled to enjoy the traditional sport of fishing without owning a boat or travelling the back roads to a remote fishing lake.
Al Springer, a member of the Peachland Sportsmen's Association, is excited to help kids learn to fish.

The Central Okanagan Regional District recently constructed a paved pathway through Shannon Lake Regional Park to this dock so it is accessible for those in wheelchairs who want to fish too. CORD also organizes Go Fish every May and early June at Shannon Lake and the Hall Road pond in Mission Creek Regional Park, with rods to lend to youngsters and weekend instruction in the art of fishing, thanks in part to the Kelowna Fish and Game Club.

It’s in collaboration with the Summerland Trout Hatchery, which brings a truck full of fish-laden water in and dumps hundreds of “catchables” so youngsters can learn to fish and have the satisfaction of pulling out a 10-12-inch trout which they can take home for supper.

It all culminates in the annual provincial Family Fishing Weekend June 17,18 and 19, when all residents can fish for free without a fishing licence on freshwater throughout B.C.

The PSA holds an annual derby with prizes for youngsters interested in learning to fish, at Shannon Lake June 18, while the Black Mountain Sportsman’s Association holds an event at Bear Lake the same day. The Vernon Fish and Game Club plan an event June 11 at Pinaus Lake.

Each year for the past decade, Al Springer of the PSA has organized the Shannon Lake event, as well as spearheading the kids’ fishing program and Fishing Forever, a B.C. Wildlife Federation program that allows the disabled to enjoy a day of fishing at lakes around the province.

Fishing is an activity that you can enjoy for a lifetime anywhere in the world. It gives kids a respect for the outdoors and the cycle of life...

In all, he figures thousands of youngsters got their first taste of this sport at Shannon Lake, which gives him a lot of satisfaction because he’s personally passionate about fishing.

“No two days are the same; it’s always a challenge because they don’t just jump onto your hook. You have to work at it,” he says with a grin. “And, there’s always a chance you’ll catch something big.”

He’s gone fishing and run into adults who reminded him he’d taught them how to fish, and thanked him for it.

As well as it being an activity they can enjoy for a lifetime, anywhere in the world, he says it gives kids a respect for the outdoors and the cycle of life that fish are part of, from the insects they eat, to their companions in that habitat: eagles and osprey, turtles, geese and ducks, muskrats and otters.

“They also learn about persistence, patience and problem-solving—all good attributes for life,” he says.

But it all happens because volunteers come out to help, he emphasizes, adding, “Volunteers are always welcome.”