Curling: Our Other Ice Sport 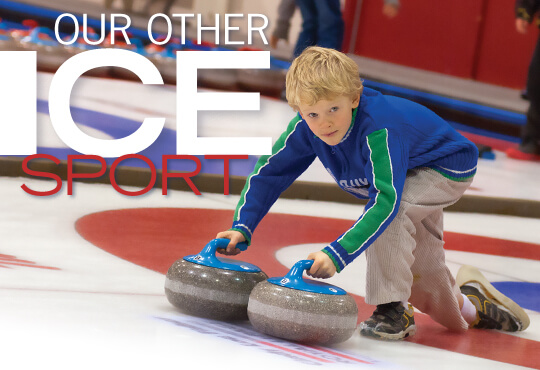 When Mom warned you not to throw stones, she wasn’t talking about this popular Okanagan winter-buster ...

When you see the portrait of James Cameron Dun-Waters (the Okanagan’s early 20th century answer to Scottish landed gentry) on the cover of Stan Sauerwein’s book Fintry, you wonder if this man ever had a passion for anything. Known as the Laird of Fintry, his face defines the dour Scotsman.

Togged out (and “togged” is the only adjective that comes close to working) in his curling tweeds and Tam o’ Shanter, he glowers at the viewer from the sepia-coloured photo. Could this man possibly be having fun?

Apparently so. James was so obsessed with curling that he wrote this ode to the sport:

“You cannot be a piker
and you must stand the gaff,
And learn to hit them with a smile
and miss them with a laugh.”

Before cars and chairlifts made downhill skiing accessible, curling was the Okanagan’s big winter sport. By the turn of the 20th century, every town in the North Okanagan had its own curling sheet (read ice rink). It’s not that southern Okanaganites didn’t like to curl, but the game was played outdoors in those days and the southern end of the Valley was often not cold enough to form a stable ice surface.

Curling arrived with the earliest immigrants and was promoted by the likes of the Laird of Fintry. He was so devoted to the broom and stone that employment on his estate often depended as much on a man’s ability to curl as it did on his ability to do the actual job.

The Laird’s 21st century curling descendents are cut from a different bolt of tweed. Although the game is taken just as seriously, today there’s a lot more laughter and not a dour face among the players.

Kids as young as eight curl in organized leagues and seniors well into their upper 80s and a few in their early 90s still play for the love of the game.

Curling is regarded by many as an old man’s game. Americans scoff and refuse to call it a sport because there’s no fast action or violence and the scores don’t skyrocket to create the feeling that something great has been accomplished. Even video game designers don’t see enough action in curling to create a virtual version. Google curling and the closest thing you come up with is Barbie’s curling iron.

When you talk to a dedicated curler, you hear aphorisms like “chess on ice.” Curling is a game of strategy and cooperation more than sudden bursts and individual stardom. It doesn’t take a rare individual to play, just one willing to walk a different path.

At the Kelowna Curling Club (KCC), Ewan and Ramsey Murray are making headway in the sport. The 12-year-olds are part of the club’s 15-member junior league. Fraternal twins, the brothers wear orange hoodies—a far cry from the Laird’s tweeds and tam. But they’re serious enough to defend curling in the face of all the hockey hoopla broadcast on television.

“Hockey’s too violent,” says Ewan. “I watch it on TV and see all the guys getting hurt and I don’t want to be injured. Besides, I’m not that good at skating...”

Ewan and Ramsey are on the KCC Junior Club’s travel team, playing in tournaments with other clubs around the Valley. There are 14 curling clubs in the Okanagan where they can compete.

Teammate Logan Miron, also 12, has been playing for seven years. Like a lot of curlers, he started with his grandpa and although he likes watching hockey, he understands the financial cost of the game. “It’s too expensive. With curling I have a lot of fun and it turns out that I’m good at it.”

Anyone interested in curling can get into the game for under $50. All you need is a broom and a set of clean-soled shoes. The stones and ice sheets are provided by the curling club.

Girls have a different take on the sport. It’s a level playing field with the boys and as much for socializing as it is for the good-natured competition.

Vernon’s Carley Cade also came to the sport through her grandfather, Doug. He’s been curling for nearly 40 years and started on outdoor sheets in the North Thompson. Now he coaches the juniors at the Vernon Curling Club and passes on his knowledge to Carley, mixed in with a bit of family together time.

Hailee Kepes is another keener. Within her first month-and-a-half of curling she had improved to the point where she joined Logan, Ewan and Ramsey on the KCC travel team. “I really like curling and it’s really helped that I’m  with an amazing team who are helping me get better and better.”

The first written record of curling was in 1541, but the game was obviously played well before that. Curling was an outdoor sport between the 16th and 19th centuries and may have benefited from what is now known as the Little Ice Age. This was a cool period lasting from the Middle Ages to the mid-1800s, which coincided nicely with the growth of curling.

Because of the long, cold winters Canada proved an ideal locale for the sport. It arrived with decommissioned Scottish soldiers who received land grants as pensions in what was to become Canada.

The Royal Montreal Curling Club was founded in 1807 and is the oldest continually active sports club in North America.

Scotland still maintains control over the game that most Scots feel is their national sport. The World Curling Federation is based in Perth, Scotland, and the Royal Caledonian Curling Club is the “mother club” of curling. Ironically, the Royal Caledonian was founded in 1838 making it 31 years younger than the Royal Montreal.

Also known as the “roaring game” because of the sound the stones make as they pass over the ice, curling is now played across northern Europe, Japan, China, Australia, New Zealand and Korea.

Yet for a game that’s been played constantly for at least five centuries and internationally for nearly two hundred years, curling is pretty casual compared with many other sports. The first world championship, in Edinburgh, Scotland, wasn’t held until 1959.

Canada took home the first Scotch Cup. Ernie Richardson, from Regina, skipped the winning team. Ernie and his family are game legends of the sort Don Cherry would love to talk about.

Curling finally made it into the Olympics in 1998, but Olympic curling has kind of a hazy history. It was introduced to the International Winter Sports Week in 1924 and sporadically continued as a demonstration sport.

In a strange twist in 2002, the International Olympic Committee (IOC) declared the 1924 Winter Sports Week to be the earliest Olympic Winter Games. The IOC then went on to award medals to the winners of that event. In a competition that included only men and official teams from just three nations, Great Britain received the gold, Sweden took home the silver medal and France walked away with the bronze.

But all the events between then and 1998 were only considered demonstration games. Too bad. In the 1932 Olympics, for example, curling was a demonstration sport with teams from Canada and the United States. Canada won, 12 games to 4.

Stone and broom have been taken to heart in this country. According to the Canadian Curling Association, we are the largest curling nation in the world with more than 729,000 active players (2008 Census). Since 1998, both men’s and women’s teams have stood on the podium in every Olympics.

When Sandra Schmirler, first ever woman’s curling Olympic gold medalist, died in 2000, over 15,000 people attended her funeral and it was broadcast on national TV.

So what is it about curling that appeals to the Canadian soul? Is it the lack of bench-clearing brawls? Or is it civility and polite competition where you don’t have to man-up on steroids and UFC commercials?

This is a very civilized game played by all ages where sportsmanlike teams shake hands and wish each other “Good curling” before the event and afterward, teams stack their brooms and the winner traditionally buys the loser a drink.

Stick curling has come on strong in recent years. This version of the sport allows the players to use “push sticks” to deliver their rocks. For many folks with joint issues, this allows them to play the game without having to bend or squat at the hack (the anchored blocks from which players push off on the slick ice surface).

An experienced stick curler has all the control players using hand-thrown stones have. The stone can be spun either clockwise or counter clockwise to alter its course down the sheet and the weight of the throw (the force with which the stone is thrown) can be varied to successfully accomplish different tactics.

Stick curling also makes it possible for special needs athletes to take part in the sport. Jonathon Macdonald, a 24-year-old special athlete and his buddy Dayle Booth represented KCC at the Special Olympics provincial championships a few years ago. Another friend, Joanne Siefried played on the provincial Special Olympics team and placed second in the recent provincials.

Joanne, along with Teri-Kay Lawrence are the veterans of the Special Olympics team having joined when KCC first offered stick curling.

All three are proud and brag about their accomplishments. But Jonathon has another reason why he likes curling—it introduced him to his girlfriend and fiancé Tiffany Conners.

Tiffany curls from her wheelchair. When it’s her turn to throw, a teammate pushes her chair off from the hack and she guides the stone with her stick toward the hog line (the line where a curler has to let go of the stone or be penalized). Tiffany is in total control and follows the skips directions on placement.

When she has to sweep, she works her brush over the ice surface while being pushed along.

“I have a lot of fun on the curling team. The people are really nice and I get to meet a lot of new friends. It’s especially cool because I got to meet Jon through curling.” Tiffany holds up her diamond engagement ring emphasizing her love of the stones.