Clash of the Conservationists 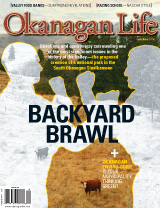 The South Okanagan Similkameen park proposal has stirred up a snake pit of dissention. From the moment the idea of a national park was proposed, opinion began to polarize, not so much on the issue of conservation, but on the location and desirability of a national park to do the job.

Read the original feature from the October 2006 issue.