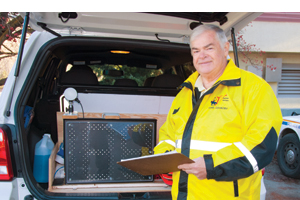 It’s obvious that Bill Reichelt, president of the Lake Country Citizens’ Patrol Society, has finally found his true calling. Whether settled in his tiny office adjacent to the Lake Country RCMP detachment, buried in statistical forms, stationed on roadside speed watch or cruising Lake Country behind the wheel of the patrol vehicle, he’s happy to serve.

“In the back of my mind, I’m just a wannabe cop,” says the Fort Erie, Ontario, native. “We are the extra eyes and ears for the police. Our volunteers gather information so the police have time for other jobs.”

No stranger to volunteer work, the retired salesman, former hockey and football coach, based his family in St. Albert, Alberta, before moving to the Okanagan eight years ago. “We came here for the shorter winters and more gardening time for my wife,” says Bill, who immediately got involved in Lake Country Community Policing, the umbrella organization for Citizens’ Patrol. “It’s a way to get to know the area, meet people and give back to the community,” he says.

Pride in his eyes, Bill describes the roles played by the 28-year-old organization. “We act as traffic directors and security at the annual Terry Fox Run, Canada Day events or the Oyama Day Parade,” he says.

The group also offers a Child ID program. “We provide families with a fingerprint, handprint or footprint of their child and advise them to place it, along with a lock of hair, in a plastic bag in their freezer.”

Checking hotel and mall parking lots and driving up dark, dead-end roads may not seem like a fun way to spend an evening, but Bill says it’s worthwhile when he finds a stolen vehicle or licence plate. Volunteers are also on the lookout for unlocked vehicles or kids, dogs, computers or change left in parked cars.

A gregarious guy, Bill likes to be where the action is. His face lights up when describing the roadside speed watch. Radar gun and reader board (which shows drivers their speed) set up on each side of the road by 7:30 a.m., Bill and his partner record the licence number, colour and make of any car doing more than 30 km/h above the limit. “We give the licence number to the RCMP. Sometimes a driver will speed up and give us the finger, then get nabbed by the RCMP further down the road,” he says with a grin.

New volunteers receive on-the-job training during their required five-hour monthly shift, partnered with a more senior member. “It takes a few months to build confidence and feel comfortable in the position,” says Bill. And all members go through a rigorous 13-page security check, the same check used for new police officers.

Safety first. While on patrol volunteers maintain radio contact with the RCMP, checking once an hour and calling for back up if necessary.

Patrollers can attend the annual symposium set up by volunteers from various Okanagan patrols, featuring sessions offered by the BC Crime Prevention Association including  non-confrontational communication skills, recognizing a grow op, first aid and training in radar, reader board and radio use.

After four years as president, Bill is stepping down. “But I’ll keep going as coordinator of speed watch,” he says, “I have no desire to leave.” Presently he is recruiting new volunteers. “We have 16, and most members do much more than five hours a month. Of course, some time is for socializing. We have barbecues with members of other Okanagan Patrols.”

The new Ford Explorer, designated specifically for patrol use, is bigger and more comfortable than the last as members put 8,500 kilometres on it in 2011. Grants from the District of Lake Country, a good deal at Watkin Motors and a Capri Insurance discount helped with the purchase. Bill is also grateful for the donation of two laptops from ICBC and additional support from the Central Okanagan Regional District and the Lake Country United Church.

His goal for the future?  “Get more members,” he says, picking up the phone.