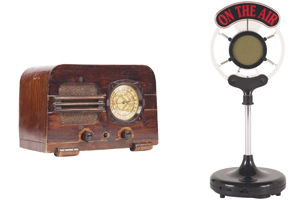 It’s lunch time. Early 1950s suburban Toronto. My siblings and I burst into the kitchen, hungry for the sound of our favourite CBC radio program. The dial of our brown plastic Westinghouse is set. We munch egg sandwiches to the lyrics of the Teddy Bears’ Picnic, eager for the stories presented by Bing Whittaker, host of The Small Types Club.

When Bing says, “Ssssssscoot! Out to play, back into bed, off to school or whatever mother tells you,” we know it’s time to go. But we dawdle, straining to hear a tidbit of the next show. Wait. There it is.

The Happy Gang and the Small Types Club inspired my lifelong obsession with CBC radio. Except for a short-lived defection during my teen years to CHUM’s Top 40 hits, I have remained a diehard CBC fan. But, lately my attention to the quality of programming is on high alert.

In the 1970s my penchant for politics was developed by the wise men and women of the CBC. Jump ahead a decade and I learn to appreciate the cozy company of talk show hosts Shelagh Rogers and Valerie Pringle. My next discoveries become weekend favourites; time to reminisce on a Saturday night with Finkleman’s 45s followed by Sunday morning with the story telling expertise of Stuart McLean at The Vinyl Café.

I always thought my passion for the English language and correct grammar originated with my well-spoken parents. While they undoubtedly had a part in it, lately I’ve realized that growing up during the golden years of CBC radio had a huge impact.

When I graduated to truly discerning listener status, CBC veteran Peter Gzowski hooked me with his friendly, sometimes gruff, always brilliant turn of phrase. There was no going back. Author of almost 20 books, recipient of a Gold Medal from the Royal Canadian Geographic Society and Companion of the Order of Canada, when he went off the air in 1997 Gzowski had conducted 27,000 interviews as host of Morningside. The Canadian standard for broadcasting had been set.

During the same era the wisdom, wit and warmth of irreverent talk show host Vicki Gabereau dominated the afternoon airwaves. She entertained us with 15,000 interviews, first as a summer Morningside replacement, then with her own two-hour show from 1985 to 1997, when CBC lost her to CTV, where her program ran for eight more years.

A bad year, 1997. CBC radio lost two media icons, government funding reached a new low that has descended a slippery slope until the present. Staff cuts, broadcasters making do with out-dated technology and an alarming number of glaring grammatical errors all contribute to the erosion of the exemplary level of broadcasting that CBC Radio once represented.

The loss of the CBC Radio Orchestra, in 2008, was a further blow to national pride and culture. In 2009 conductor Alain Trudel picked up the baton and with businessman Phillipe Labelle formed the National Broadcast Orchestra, now a registered Canadian charity. National pride scraping for charity tax dollars. What’s wrong with this picture?

Canadians are disturbed by this rapid deterioration of the glue that struggles to bind us as a nation, driving some 100,000 CBC devotees to join the watchdog organization Friends of Canadian Broadcasting. They challenge broadcasters and push politicians to preserve a system that informs, enlightens and entertains us from a Canadian point of view. The motto of yet another long gone show, The Dead Dog Comedy Hour, encourages us to “stay calm, be brave and wait for the signs.” Stand by the first two, but don’t wait, let your voice be heard. There may still be time. –Patti Shales Lefkos