On a trek back to her hometown for a visit with her folks, my partner found an interesting read. At the renovated Club 50 Activity Centre, they found a worn, nearly 100-year-old treasured artifact: pages from the 1918 Kincaid Star.

Now for the record, I’m a bit amazed this village was ever populated enough to warrant a newspaper, yet somehow comforted by the idea.

The echo from those old headlines eerily resonates today in these uneasy economic times where US too-big-to-fail monopolies are wiping out small businesses and main street, and Trump is taking aim at BC softwood lumber and messing with long-standing international trade agreements.

That bundle of old newspapers also had a 1928 edition with a headline: Urge Acceptance of Canadian Currency. The report of a letter by A. H. Jarvis of Ottawa to the US consul-general reads, “Although we are Uncle Sam’s best customer and despite the fact that the American dollar is accepted without question over here, there are many places and business houses and hotels across the border where the Canadian dollar is no more regarded than if it were the paper of Soviet Russia.” 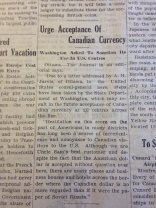 Talk about being the poor northern cousin. Now only willing to give three quarters for our loonie, back then they wouldn’t take our money at all.

Our fascination with headlines remains. Tapping some primal need to share news, we ask each other, have you heard? The need to know runs deep, but is the need to know as deep as the need to know we belong? Shared culture is the beating heart of a community and that entity “a city and regional magazine” feeds our collective social imagination with its photos and stories of the places and people around us. Forty-five years ago, city lifestyle magazines began popping up across the urban North American landscape. Okanagan Life is just entering its 30th year of publication and we’re honoured to weave those threads that keep our social fabric intact.