Democracy is far from perfect, but it is the best system we have. Over 78 days of Canadian non-perfection, 24 political parties put 1,792 candidates in front of some 26.4 million eligible Canadians to lobby, cajole, pontificate, embellish and beg for their votes.

A new beginning starts with a Liberal majority with Justin Trudeau as prime minister and his promise to rebuild the Canadian middle class.

Albert Einstein once said that there are only two things that might be infinite: the universe and human stupidity — and he confessed he wasn’t sure about the universe. Fitting then, that almost 100 years to the month since his general relativity theory changed the rules of human reality, the longest, weirdest, most expensive and most controversial election in Canadian history has ended.

Presently, we live in a world where we not only pollute the air, rivers and oceans, but an even more insidious pollution invades our minds. We ignore the warnings of 97 per cent of the world’s most brilliant scientists about global warming in favour of a few psychopathic oil CEO’s and their lap-dog politicians. Why? Money. Studies prove that the human species is not just bad at probabilities and statistics, but it seems we are predisposed to incompetence. (Half of us think 100 million equals a billion. A rat beats 20 Harvard students in a probability study.) We will support illegal wars in Iraq and Afghanistan just to fit in, even when we know it is wrong. Why? Money. We connect the dots our way and assume we couldn’t possibly suffer from confirmation bias, prejudice or narrow-mindedness — when they actually rule our lives.

The cognitive dissonance from “lack of money” affects our decision-making ability in hideous ways. We cannot grasp the idea that money, above everything else on this finite planet, is the cause of all of our political, social and environmental problems. The reason: notorious neo-conservative, Wall Street-funded think tanks have spun delirious tales, fables and lies about a trickle-down economy that was supposed to reward everyone. The truth is, only the rich get richer?—?the trickle never happened — never will. Liberal candidate Chrystia Freeland wrote Plutocrats: The Rise of the New Global Super-Rich and the Fall of Everyone Else, a best selling book about the half of one per cent. Believe me when I tell you that they have no brake.

Last issue I penned an opinion piece that was decidedly critical of Stephen Harper. Anyone But Harper obviously resonated with readers, because the same day that 17,000 magazines were delivered to businesses, offices and residences, I was inundated with emails and phone calls of overwhelming support; more than any editorial in 35 years publishing city and regional magazines. I was surprised that there were only a couple people that admonished my views. Trans-national corporations have tricked, fooled and robbed small and medium sized businesses of their money to the point where the half of one per cent now own more wealth than the 99 per cent.

In the last five years of my 57-year life, I have come to realize that much of what I thought or understood about how the world worked, acted and behaved was desperately and decidedly wrong. It follows then, that I have been wrong. I now know that capitalism needs so much more that a tweaking or Band-Aid, it needs a complete overhaul. It begs us to learn how to think again. I was a huge conservative supporter, advocate and fan for 90 per cent of my life — but I learned that trickle-down doesn’t trickle.

Justin promised to fix that, and he will need our help. 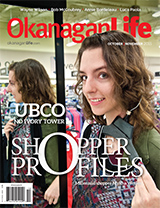 Our Oct-Nov issue digs deep into the profiles of Thompson Okanagan shoppers and we're celebrating how UBCO makes a big difference to so many facets of life in the Valley. Wine writer Michael Botner showcases a quintet of fabulous wines from selected producers on the multi-faceted Naramata Bench.