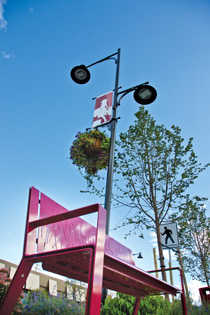 On the other side of Okanagan Lake, West Kelowna wanted to reclaim Westbank’s traditional main street as the centrepiece of its revitalization plan. Gorgeous plans and illustrations were drawn up. The community was onboard.

Now, weary of an apparently failed charm offensive against the provincial ministry of transport and infrastructure, the municipality has decided to concentrate its efforts for a revitalized town centre on a perpendicular side street.

But losing the centrepiece of the revitalization plan was a setback. “It was a blow,” says West Kelowna mayor, Doug Findlater.

For the foreseeable future, Westbank’s actual Main Street remains the southbound artery of Highway 97. Traffic thunders by on some days and shuffles through, bumper to bumper on others. Shops on both banks of this rushing river of rubber and metal are marooned and forlorn looking. The sidewalks are dusty and unpopulated.

The ministry cites cost and construction issues in rejecting West Kelowna’s plea to move all four lanes of the highway over to Dobbin Road, the current northbound portion. 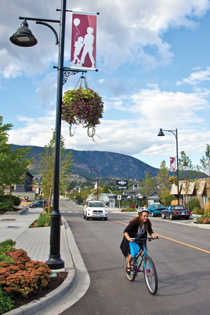 Undaunted, Mayor Findlater and council have taken the lemons handed to them by the provincial bureaucracy and are determined to make not just lemonade, but a lemonade stand.

They hope that Brown Road, recently beautified and with spiffy new residential buildings to boot, will be their new high street. And plans have been drawn up for a real municipal hall, complete with plaza, to be built one street over. West Kelowna voters may find this a referendum item on the November ballot.

Revitalization requires carrot and stick. Push and pull. Public and private. And vision. It really is all about the street.

It might be a bit of a cliché, says Bernard Momer, associate professor of urban geography at UBCO, but there is a certain “if you build it, they will come,” factor that municipalities must deal with if they want to grow.

Bernard says cities, towns and villages must “create an environment that attracts.”

“It used to be that people moved to a job,” he says. “Now 60 to 70 per cent shop for a place to live and then find a way of working. It’s sort of a post-modern way of working and living. And communities realize they must up their game to attract and retain people.”

So, vibrant main streets and lively town centres are not just the pretty foam on your vanilla latte. It’s serious stuff, not fluff.

People draw businesses and businesses draw people: a virtuous circle. Mixed use, pedestrian-friendly districts act as attractors. And attractors have got to be attractive.